GREENBURGH, N.Y. -- New Knicks forward Zach Randolph took a
couple of swings with the hockey stick he'd just been handed, then
grabbed a spot alongside the Rangers' two new additions for a
photo.

It's shopping season in New York, and the Knicks might not be
done yet.

Acquired from Portland in a draft-night trade, Randolph was
introduced Monday by the Knicks, who will pair him with center Eddy
Curry to form what they hope will be a powerful frontcourt.

"I'm not going to have a problem playing team ball and helping
this team win, because that's what I want to do," Randolph said.
"I started out in Portland when it was good, we made it to the
playoffs and I stayed there when it went bad. And I'm just ready to
go to a winning team and make the playoffs."

The Knicks haven't done that since 2004, but Randolph's arrival
should move them in the right direction. And he might not be New
York's last move of the summer.

Coach and team president Isiah Thomas said the Knicks have been
"active" since the NBA's free agency period opened Sunday in
hopes of landing another star from the Pacific Northwest, Seattle's
Rashard Lewis. 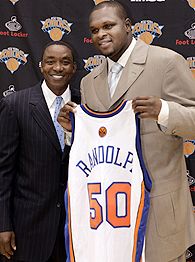 "We've had discussions with his agent," Thomas said. "He's a
person of interest."

The other Madison Square Garden tenants had a big day Sunday
when the Rangers signed free agents Scott Gomez and Chris Drury.
Thomas wouldn't say how hopeful he was of landing another big name
of his own, but plans to try.

"If a player's out there that can make us better and we have an
opportunity to get him, I'll try to do that," he said.

With guards Fred Jones and Dan Dickau also coming from Portland,
the Knicks have the maximum 15 players under contract, and still
have to sign first-round pick Wilson Chandler and possibly Demetris
Nichols, a second-round pick of the Blazers whose rights were
acquired in a separate deal Thursday night.

Randolph was the centerpiece of the deal after averaging a
career-best 23.6 points and 10.1 rebounds -- the second 20 and 10
season of his career. But his record on the court often gets
overlooked because of the one he's built off it with a number of
legal problems.

But Jones thinks that will all change with Randolph out of
Portland, where the Blazers were the only game in town and couldn't
hide from the spotlight.

"He just needs a change of scenery, he needs to just come out
and let the people respect him for his game," Jones said. "I
don't think he got all the stuff for his game because of all the
stuff that people have portrayed of him off the court. Twenty and
10 guys are All-Stars in the league every year, he's never been an
All-Star. So that was the problem in Portland."

Some of it was Randolph's own doing.

His past troubles have included an arrest for driving under the
influence of intoxicants after a police officer said he smelled
marijuana in Randolph's car; and a guilty plea to a charge of
underage drinking in his Indiana hometown. A woman filed a $2
million civil lawsuit against Randolph last season, claiming he
sexually assaulted her.

"I'm a man. I made mistakes when I was young, but that's all
over with," Randolph said. "I'm on a fresh start and just try to
bring this team back to the playoffs."

Randolph knew he was likely to be traded after the Trail Blazers
won the draft lottery and the right to pick Greg Oden. But Dickau,
a Portland native, and Jones, who took less money last season for a
chance to play in his hometown, were surprised to be moved.

Thomas said neither player was a "throw-in," and Dickau is
hoping for a chance to contribute as he joins his sixth different
NBA team.

"I love a challenge, and there's no bigger challenge than
playing in New York," he said.