LOS ANGELES -- While standing at midcourt Sunday, Jermaine O'Neal is feted by kids in purple-and-gold jerseys, mobbed by media, and wooed by celebrities like Brandy and Snoop Dogg. For the Pacers' power forward, this is a taste of life as a baller in L.A. 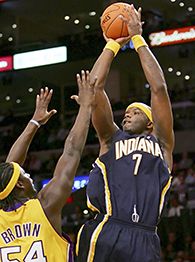 He wants to be a Laker.

"It's time for me to move on," he said. "And the Lakers are the team I want Indiana to trade me to."

O'Neal added that he has made his intentions clear to Pacers management over the course of several offseason conversations.

"I love Indiana and the fans and we have a lot of nice young talent," he said, "but obviously [the Pacers are] in a situation now where they're rebuilding. I told them I can't be in a rebuilding mode right now. I'm at a point in my career where I can't wait another five years to contend. I'm not in a position physically to take in five years of losses and downtime."

For the Laker faithful, O'Neal's is a familiar refrain. In what has become the Summer of Kobe, the Lakers have tried to acquire talent to placate their star, Kobe Bryant, who reportedly wants out of what he deems to be L.A.'s rebuilding project. However, talks with the Pacers to acquire their own disgruntled star have stalled over Indiana's insistence that the Lakers' package include both Lamar Odom and 19-year-old center Andrew Bynum. The Lakers reportedly have countered with an offer that would send Kwame Brown, Brian Cook and Bynum to the Pacers.

"Larry Bird is a hard man to deal with," O'Neal said. "He tries to make unfair trades. He wants to gut a team, but the Lakers are trying to get over the hump. I want Indiana to benefit, but with some nice young players and draft picks. I want to make it clear that I don't want to gut a team that I come to because then it'll be like I'm in Indiana all over again.

"If things don't work, I have an option in my contract next year and I will opt out and become a free agent."

Still, some pundits believe that only the acquisition of Kevin Garnett -- whom the Timberwolves recently traded to the Celtics in a blockbuster deal -- would be enough to prevent Bryant from opting out of his contract with the Lakers in one year's time. For his part, O'Neal, who counts Bryant among his close friends, said he believes his arrival in L.A. indeed would be enough to keep Bryant in purple and gold.

"Me and Kobe have talked a lot this summer about getting me here," O'Neal says. "We've been on each other since we were 15, playing AAU basketball, adidas All-American Camp, Nike All-American Camp. It's been a long relationship. We've been trying to make this happen all summer. He understands the desire that I have right now. Mentally, we're on the same page.

"Kobe's in a position right now where he knows he needs some help. He's the world's best player, and he's got a good group of guys around him, but he needs somebody to come in there and give him some support. He knows I want to get back onto the court and prove the naysayers wrong.

"If I'm [in LA], I'm going to help this team win a championship. We can get the Lakers to elite level," O'Neal said, adding that his recent surgery to repair a torn meniscus will have him completely healthy for the first time in two years. "People need to realize that my last two years weren't down years. I didn't go into the last two seasons healthy at all. I'm healthy now and, at 28, I'm in my prime. The game is slowing down for me. I understand it a lot more. I'm ready to show people what I can do."

"Kobe's been criticized unfairly," O'Neal said. "He's in a 'damned if you do, damned if you don't' situation. If he passes too much, they say he's not shooting. If he shoots, he's called selfish. He can go out and score 50 and lose, but if you don't take your shots, you're going to lose anyway. Everybody handles situations differently, and he handled the situation the best that he could. All in all, he wants to put out a team that can win. When you get into your 11th year, your body begins to wear down. You see the window of opportunity closing fast. I understand exactly what he's saying. That's what I told my team. That's why it's best for me to move on."

Though Bynum is now on the table in a trade scenerio that might bring O'Neal to L.A., the Lakers' refusal to part with Bynum, the 10th pick in 2005, during last year's trade deadline prevented them from acquiring Jason Kidd. The Nets point guard, who was also in L.A. for the charity game and recently played with Bryant in Las Vegas during Team USA's training camp in July, says he too felt Bryant's frustration.

"He expressed how nice it would've been to play together," Kidd says. "Vegas was the first time I got to play with Kobe during practice and games. He's an amazing talent, the best offensive player in the game. All I can do is wish, and think what it could've and should've been like to play with Kobe."

Kidd can take heart. If talks between the Lakers and Pacers continue to stall, O'Neal says he'd also welcome a trade that would see him team up with Kidd.

"Los Angeles and New Jersey would be my top two teams," O'Neal said. "I think L.A.'s a real possibility and I think New Jersey's a possibility, too."

It would appear that O'Neal's athleticism and size would fit nicely among New Jersey's perimeter players. But make no mistake, O'Neal prefers to be an Angeleno, above all. Save for his past two summers -- which he spent rehabbing in Indiana -- O'Neal comes to L.A. every offseason to train. Though he recently sold his home in Westwood for what he calls "an unbelievable deal," he explains that he and his wife are already searching for a new house in Los Angeles.

"I love L.A., my wife loves it, my daughter loves it," he says. "I tried not to come out here this year. I wanted to stay away from a lot of the talk because it's an emotional time for me to talk about being traded. I always told Reggie [Miller] I'd win a championship for him, and for whatever reason we've had some tough times up there [in Indiana]. But I thought if I came out here [to Los Angeles], it would help persuade me to make the decision that I need to make."

Yet, even as he laughs away suitors like longtime Lakers fan Snoop Dogg, who all but begged O'Neal to join the Lakers, it seems that O'Neal already has made his decision. Now, he's just waiting on the other parties to catch up.

Because while rubbing shoulders with celebs at a charity game is good, doing so in a Lakers jersey is better.

Sam Alipour is based in Los Angeles. His Media Blitz column appears in ESPN The Magazine and regularly on Page 2. You can reach him at sam.alipour@gmail.com.