WALTHAM, Mass. -- Newly signed free agent forward James Posey took his seat in between one of the Boston Celtics' owners
and director of basketball operations Danny Ainge, and something
that was very noticeable right away was the oversized NBA
championship ring on his left hand. 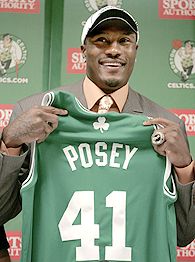 "We're very happy Danny put this deal together and, obviously,
from the weight on his hand he has championship experience," owner
Steve Pagliuca said of the team's recent addition.

The Boston Celtics added another piece to what they hope is a
championship-caliber team Monday, signing the 6-foot-8 free agent
forward to a two-year deal. Posey will make between $7 and $7.5 million over the course of the deal, although the second season is a player option.

"I think he's one of the brightest spots this summer," Ainge
said during a press conference to introduce Posey at the team's
training complex. "He's a huge addition to our team. He's got
incredible versatility on both ends of the court."

A member of the Miami Heat team that won the NBA championship in
2006, Posey completes an offseason rebuilding that saw Boston
acquire veterans stars Kevin Garnett and Ray Allen along with role
players Scot Pollard and Eddie House.

"You know what's going on [with this team]," Posey said.
"First it was Ray Allen coming here and then it was KG. It was
like 'Wow, things are starting to change.' You look for this
opportunity and luckily it was there."

Known primarily as a defensive player, Posey has averaged 9.5
points and 4.9 rebounds during his eight-year career.

"Defensively, I think he's a great addition," Ainge said. "He
can play the 2, the 3 or the 4. He can even defend some of the
point guards in our league. That gives us a lot of options."

While waiting for a new place to play this summer, Posey watched
the Celtics turn a team from next to worst in the league at the end
of last season to a possible playoff contender.

"It was a chance to win a championship," said Posey, twisting
his new No. 41 green jersey in between his hands while talking to
the media. "It feels good to be a part of the tradition. I'm very
excited for the opportunity to win."

Posey was later asked if he'd show Paul Pierce, Allen or
Garnett, three stars who have yet to win a title, his ring.

"I might wear it one more time just to let the guys know what
you play for," he said.

ESPN Insider's Chris Sheridan and The Associated Press contributed to this report.