MINNEAPOLIS -- The Minnesota Timberwolves, their roster
bloated from this summer's blockbuster trade of Kevin Garnett,
would like to make another deal before the season starts.

But with many other teams worried about the luxury tax, the
Timberwolves are likely to start training camp this weekend with 16
players on their roster -- including five guys they got from the
Boston Celtics for Garnett. Eight players are returning from last
season, plus two draft picks and veteran forward Juwan Howard, who
came in a trade with the Houston Rockets. 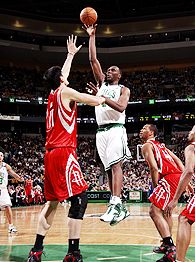 "We're talking with some teams. Really, it's just been a slow,
slow month," vice president Kevin McHale said Tuesday. He said he
had "three or four" deals on the table, waiting word from those
teams once they assess their situation in regard to the salary cap.

Howard was unhappy when Garnett was traded, but he's expected to
join his new teammates for Friday's media day and Saturday's first
practice before the Wolves leave for 10 days of training and
exhibition games in Europe.

Coach Randy Wittman said he spoke with Howard, who is beginning
his 14th year in the league, and was satisfied with his mindset.

The Wolves have a glut of shooting guards and small forwards, so
they'd like to use the excess and pull off another deal. They also
explored a trade with Howard, but "nothing made sense," McHale
said.

One player whose status for training camp is not yet resolved is
rookie Chris Richard, the second-round draft pick. He's been given
a qualifying contract offer, McHale said, but has yet to accept it.
Backup big man Mark Madsen is out for at least another six weeks
following shoulder surgery, but Mark Blount, Al Jefferson,
Craig Smith and potentially Theo Ratliff will diminish Richard's chance
to play much.

The Wolves have until Oct. 31 to reach an agreement on a
contract extension with Jefferson if they want to prevent him from
becoming a restricted free agent after the season. McHale said
there have been preliminary talks with Jefferson's agent.

"That'd be something we'd like to get done," McHale said.

In other news, Wittman said shooting guard Rashad McCants is
"night and day" better than last season regarding his surgically
repaired right knee. Wittman said McCants is 100 percent healthy,
after the injury kept him out until Jan. 31 and limited him to 37
games.