OAKLAND, Calif. -- Stephen Jackson reported to the Golden State Warriors' training camp Monday with a new tattoo covering
much of his chest. With a church window as the background, two
praying hands are inked on his sternum -- and they're holding a gun.

Yes, this is the same Stephen Jackson who will miss the
Warriors' first seven games under NBA suspension for pleading
guilty to a felony charge of criminal recklessness after firing an
awfully similar gun into the air at an Indianapolis strip club. 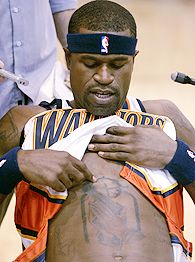 "I pray I never have to use it again," Jackson said in
explanation.

Jackson's incredible audacity under the tattoo needle is
stunning even to his teammates, who seem to be in a frantic
competition to cover their entire bodies in ink.

"I can't believe that one," said Al Harrington, who
redecorated his arms and back. "I thought I was crazy."

But Jackson's fearlessness is exactly why the Warriors love him
-- and basketball's favorite playoff underdogs need a big season
from the swingman now that Jason Richardson has departed along with
the Warriors' element of surprise.

"We're going to have a full season together, and all the
nonsense is behind me," said Jackson, perhaps also referring to
his unfinished full back tattoo of the jack of diamonds -- with
himself as the jack. "All my probation stuff is behind me. I don't
have to worry about flying back and forth to court this year, so
it's all positive. I'm ready to roll."

Jackson and Harrington transformed the Warriors in January after
arriving in an eight-player trade with Indiana. With a fantastic
late-season flourish, Golden State surged over .500 and made the
playoffs for the first time in 13 seasons -- and then knocked off
the top-seeded Dallas Mavericks in arguably the biggest postseason
upset in NBA history.

Jackson's 3-point shooting and veteran poise kept the Warriors
in many close games, but he'll be asked to do even more this season
after Jason Richardson was traded to Charlotte in a draft-day deal
for No. 8 overall pick Brandan Wright. The deal disrupted the
Warriors' core, and most of Richardson's former teammates didn't
like it.

"J-Rich is one of the best, so when they traded him, I was
hurt," Jackson said. "We made history in a couple of months. Just
imagine what we could have done in a whole season. But at the same
time, I put my trust in Chris Mullin and Nellie to make the right
decisions."

The Warriors posed for team pictures at their training complex
Monday in downtown Oakland before hopping a flight to Hawaii, where
they'll open workouts and play two exhibitions against the Los Angeles Lakers.

With coach Don Nelson's protracted contract renegotiations
finally wrapped up, everything seems harmonious for a franchise
that actually believes it should get a playoff berth for the first
time in a decade.

Baron Davis, the star of the Warriors' dramatic run to the
postseason, said he won't opt out of his contract next summer if he
doesn't get an extension this month, contrary to prior reports.
Davis reported to camp lighter and quicker after offseason
consultations with Jerry West and Steve Nash.

Harrington also lost 20 pounds during the summer to make good on
a vow to improve his rebounding with better athleticism. Jackson
dropped 17 pounds even though he says he "wasn't trying to. I'm a
sexy guy, you know? It happens."

Though he won't turn 30 until next April, Jackson projects a
steady veteran calm that belies his mercurial reputation. Aside
from the strip-club gun incident, he's best known for his No. 2
role in the infamous brawl in the Detroit stands alongside
then-teammate Ron Artest.

"There's a lot of stuff in Jack's past, but that's true of
almost anybody if you stay in this game long enough," Nelson said.
"We have great confidence in him as a player and a leader, and I
think you'd hear that from most people who have spent time to
really get to know Jack."

Nelson chose Jackson as a team captain this season along with
Davis and Matt Barnes. Jackson, who won a championship with the San
Antonio Spurs, welcomes the responsibility -- and he has accepted
his seven-game ban for breaking up a fight in Indianapolis with a
few gunshots into the air.

In fact, Jackson plans to serve his suspension in a way that
only he could imagine. He says he'll get Warriors game jerseys from
seven of his newest teammates, and he'll wear one in front of the
television for each game.

"No, 15 [games] would have been harsh," Jackson said. "It
could have been a lot worse. Seven games, I can't complain about
it, because I put myself in that position to be suspended. I'm
going to stay positive with it, work out and be ready when it's
time to come back."