One of the biggest questions facing the Chicago Bulls in the coming season has been answered: Big Ben's headband is back. 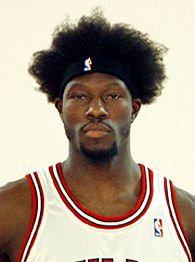 Chicago Bulls coach Scott Skiles, who would not allow center Ben Wallace to wear his trademark headband last season, said Monday that the team has decided to make an exception to its team rule and let Wallace wear the sweat-stopping accessory during games.

The return of the headband was endorsed by Wallace's teammates, Skiles said.

"We still have a no-headband rule," Skiles told reporters. "I just left it up to the guys who have been here if they wanted to make an exception for Ben. I was fine with it. They were fine with it."

Early last season, Wallace was pulled twice in a game at New York for wearing the headband, sparking a mini-controversy over his defiance of the rule -- and over the rule itself.

"I think it takes a coach who is willing to adapt a little bit and listen to his players, understanding the big picture is winning," Bulls GM John Paxson said of the decision to let Big Ben wear the headband again. "Scott's one of the best coaches in the league. There's no doubt in my mind. And he's able to adapt. It's really a non-story. But the fact that Scott has looked outside maybe a personal belief, there's nothing wrong with that."