SEATTLE -- Kevin Durant grabbed outlet passes. He stepped
out and fed post players who were running down the middle of the
floor. 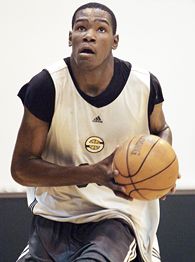 When he did go inside, he soared to the baseline for a rebound
over Wally Szczerbiak, the veteran small forward who at 6-foot-7 is
two inches shorter but far more bulky than the teenager with the
body of a greyhound.

"Way to go, KD!" an assistant coach yelled, proving Durant had
an NBA nickname even before his first practice with the Seattle SuperSonics on Tuesday.

The one time he was in the middle during a fast-break drill that
ended the 90-minute session, Durant rose above the rim with both
hands clutching the ball. Yet instead of dunking, he simply and
smoothly dropped the ball through the hoop.

The second overall pick in June's draft was on the outside
looking in during the first practice of his NBA life. He was a
shooting guard.

It seemed to fit.

"It's the same system we ran at Texas, so I'm comfortable in
it," Durant said with a smile.

For now, he's in the same "2" spot that All-Star Ray Allen
held in Seattle from 2003 until he was traded to Boston for
Szczerbiak, Delonte West and fifth overall choice Jeff Green,
moments after the Sonics drafted Durant.

"In my opinion, that's where he's best suited right now," said
new Sonics coach P.J. Carlesimo, who Tuesday ran his first practice
as an NBA head man since Golden State fired him in 1999. "Because
of the way he shoots the ball, the way he handles the ball, and the
fact that he is not as physical right now as he's going to be
before he's done.

"He's like -- he's not like Magic Johnson at all -- but he's like
Magic in that you can play him probably any of four positions, if
not five. Playing the 2, he's not going to get beat up, box to box,
the whole game."

The other conclusion from Seattle's first practice, a month
before the season gets real at Denver for a team that finished
31-51 last season: Forget that he was running with the second team
Tuesday. Durant will be starting from Game 1.

Carlesimo all but declared that.

"We've got 29 days until we go to Denver. If he's able to get
comfortable in those 29 days, then he's going to be [starting],"
Carlesimo said. "It's hard for me to imagine him not being in our
rotation right off the bat -- but that's not fair to the other guys,
and that's not fair to him, because I'm doing exactly what I'm
saying everyone else shouldn't do.

"But you ask me my opinion, yes," Carlesimo added, chuckling,
"I can't imagine him not being one of our key guys."

Last season at Texas, as Durant became the first freshman to be
national player of the year, he often dropped into the low post
when a smaller defender dared to guard him. But mostly he stayed
outside as a big guard or small forward.

Durant, 6-9, said he's comfortable as a guard in the
running-when-available style that Carlesimo, a defensive mind, has
hired assistant Paul Westhead to install.

It's not going to be the warp-speed offense that Westhead, who
last month won the WNBA championship with Phoenix, famously ran at
Loyola Marymount in the early 1990s. Not that Durant would know.

He'd never heard of Westhead's style until last week. Durant
looked puzzled at the mention of Hank Gathers' death on the court
and LMU's magical run deep into the 1990 NCAA tournament that
followed it.

No wonder. Durant was 18 months old when that happened.

Carlesimo sees talent as much as he sees a kid who turned 19
Saturday and is living with his mom in a rented house in the
Seattle suburbs.

"He is going to be an exceptional player in this league. It's
just going to take time," Carlesimo said.

Carlesimo compared Durant's physical development to that of a
player who entered the NBA skinny and did OK: Michael Jordan.

"If you look at Michael when he first came in the league, then
you look at pictures later, you're like, 'Wow!' That wasn't all
weight training," the coach said. "A lot of that was Michael was
getting big, filling out. And that's what's going to happen with
Kevin."
Until then, Durant will be learning the essence of the league,
through doing. The games on consecutive nights and four games in
five nights. The times in which he is one of the smaller, not
bigger, players on the floor.
"Almost without exception, you don't learn that immediately,"
Carlesimo said. "Even Kobe. Even Michael. Even LeBron. Even the
great ones in this league, there's a learning curve."
Szczerbiak thinks that curve will be short.
"He's a great kid. He really is. He's going to be a great
player," the eighth-year veteran said. "Everyone says it's going
to have to take time. It doesn't have to take time, because he is
committed to working hard every single day he steps out onto the
floor. When you do that, you're going to be good pretty quick.
"There's a reason why he's the second pick in the draft. He did
it in college. I see no reason why it won't just translate over to
the NBA."