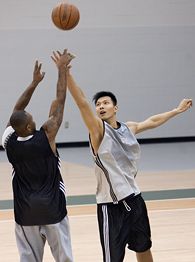 Yi, Milwaukee's top draft pick, joined his new team for his
first practice Thursday, but again dodged the question that's
hounded him since announcing he was coming to the NBA.

Yi's birth certificate lists him as being born Oct. 27, 1987,
which would make him 19, but he's long been rumored older.

"I have no comment on that," Yi said through translator Roy
Lu.

Yi, a 6-foot-11 power forward, looked sluggish during practice,
the Bucks' fourth of training camp. He traveled Wednesday on a
15-hour flight from Shanghai to Chicago, where he was swarmed by
about 75 fans, including one girl who jumped into his arms.

"I'm a little bit tired, it's tough from the long trip," Yi
said in English.

Yi missed the first two days of training camp because of
responsibilities with the Chinese national team, and he's played in
about 40 games since the NBA's regular season ended.

"He'll probably hit the rookie wall a bit earlier than most
guys, because he's already had his training camp four months ago,"
Andrew Bogut said.

At Thursday's practice, Yi also showed flashes of the talent
that made him the sixth overall pick despite his handlers' attempts
to keep him from Milwaukee.

Yi, expected to star alongside Yao Ming for China in the Beijing
Olympics next summer, signed with the Bucks after concerns about
his development and playing time were eased.

Wearing orange and white high tops embroidered with his name
that clashed badly with the Bucks' training apparel, Yi blocked a
few shots but showed obvious signs of fatigue, coming up short on
several jumpers at the 2 1/2-hour practice.

Still, he caught the eye of Krystkowiak, who said he's learned
"Hello" and "Thank You" in Chinese but doesn't plan to learn
much more.

"He's got some good skills and everything that we thought all
along," Krystkowiak said. "He's got a high basketball IQ and I
don't think there's going to be a big issue with the English. He
understands English really well in basketball terms."

A handful of Chinese reporters were on hand to watch practice,
as well as Yi's former general manager, Liu Hongjiang, who was
expected to stay in Milwaukee for a few days to help Yi get
acclimated.

Bogut, the Australian selected No. 1 overall in 2005, said Yi
was already the subject of Hollywood-style gossip columns in China
and that being so far from home will be the toughest part of Yi's
transition.

"Everybody's looking at every step ... it's just one of those
things he's got to get used to," Bogut said. "Being so far away
from home, you can't just pick up the phone and call your mom and
your dad, because there's time differences and all kinds of
obstacles that come in your way."

Yi seemed to be taking it all in stride and had several good
matchups with Charlie Villanueva, the player he'll battle for a
starting spot. He hit a turnaround jumper over Villanueva and
outworked him on a defensive series, earning praise from
Krystkowiak.

Yi, who has taken English lessons for several years, has a
better grasp of the language than Yao did when he was drafted No. 1
overall by the Houston Rockets in 2002.

Yi also said he's been impressed by Milwaukee so far, and is
eager to explore the city that has a tiny Asian population and is
known more for beer and bratwurst than cultural diversity.

"On the freeway I saw a big electronic billboard (and) my
picture was on it," Yi said. "It was a big surprise to me and I
feel excited. It's a beautiful city, nice downtown, you've got
lake, you've got river. It seems comfortable here."

As for his first night in the new city, he only did one thing.