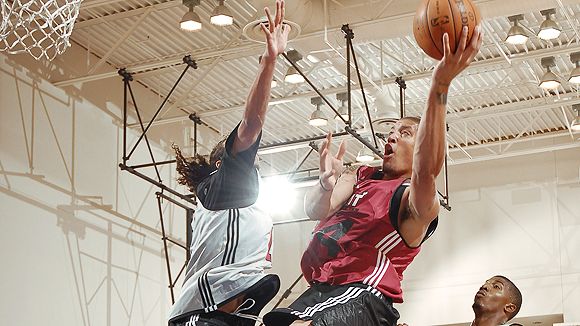 ORLANDO, Fla. -- Michael Beasley didn't care that players from other teams ringed the gymnasium to watch him play, didn't bat an eye at the thought of this being his pressure-packed pro debut and, most impressively, didn't back down one inch at facing established NBA players Joakim Noah and Tyrus Thomas.

Beasley was so cool and so smooth throughout his often effortless-looking 28-point, nine-rebound demolition of the Chicago Bulls' summer league squad Monday that the only criticism was that he did it all while singing a song aloud.

The same easygoing manner, however, wasn't evident in the debut of fellow rookie Derrick Rose, who looked jittery and shockingly unsure of himself at times in this showdown of the top two players selected in the NBA draft. Rose, a playmaking point guard, went No. 1 to Chicago and Beasley No. 2 to Miami, but on Monday at least, it clearly was the Heat's new power forward who was far and away the best player on the floor.

Beasley, whose work ethic and off-court focus was questioned in the days before the draft, might have put some of those concerns to rest Monday with a dazzling display of offensive moves. Nothing, he admitted afterward in a sometimes wacky postgame news conference, was going to change him from being the cocksure player who easily dominated college basketball and had his way in Monday's professional debut.

"It's just basketball, man. Played it in college, high school and middle school," Beasley said with a smile following Miami's 94-70 thumping of Chicago. "The same game, same concepts, the same rules. I was just out there having fun.

"You can put the Jolly Green Giant out there. I'm going to still play, man."