For his shooting -- at times impossible to defend and always magnificent -- he was known as "Pitchin' Paul." But he might just as well have been known as "Wheezing Paul."

Paul Arizin drew curious and sympathetic stares throughout his basketball career for panting and coughing as he sprinted from end to end. Opponents were alarmed at the gurgling sounds and grunts, reasoned it was asthma and wondered how he ever made it up and down the court. Arizin said it was from a persistent sinus condition he'd had since his youth. "It never hurt my endurance," he said. 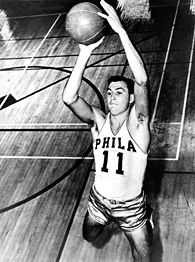 Coughing or not, Arizin's constant weapon was a jump shot, which he relied on to launch a Hall of Fame career punctuated by inclusion on the list of the NBA's top all-time 50 players in 1996. Arizin died in his sleep Tuesday night in his suburban Philadelphia home at age 78.

A 6-foot-4 forward, Arizin used elevation and hang time to get the shot off against taller defenders. "I had a five-inch advantage over Paul," said Red Rocha, a pro center in the '40s and'50s, "but it was never enough when he leaped for that jump shot." Syracuse Nats' Hall of Famer Dolph Schayes remembers pregame strategy sessions designed at stopping Arizin. "Someone would bring up Arizin's jump shot and we'd try to figure out how to stop him. 'Let's stop it,' we'd say, but we knew we couldn't. His jump shot was perfect. There was no stopping it."

A Villanova grad who was College Player of the Year in 1950 when he led all Division I scorers with 25.3 points a game, Arizin logged all 12 of his pro seasons with the Philadelphia Warriors. He led the NBA in scoring in 1952 and '57 and would score 20-plus points a game for nine straight seasons. He was named to 10 All-Star Games.

In 1956 he teamed with three-time scoring champion Neil Johnston and two gifted passers, rookie playmaker Tom Gola and Jack George, to bring the Warriors their first title since the Basketball Association of American (BAA) Warriors of 1947.

Arizin played with Wilt Chamberlain in 1962 when Chamberlain shattered all previous scoring marks with a gargantuan 50.4 average. Arizin was the second option on that team, scoring off jumpers on the break when the Warriors weren't setting up Chamberlain to score inside.