Editor's note: This article appears in the January 29 issue of ESPN The Magazine.

All eyes are on the red-felt pool table that seven-time All-Star Allen Iverson and incumbent alpha dog Carmelo Anthony are about to get their stick on. Two weeks after the Nuggets sparked a raging debate by making a trade that teamed two of the league's top scorers, no one is closer to knowing if Denver has made its future or mortgaged it.

With Anthony in the midst of his 15-game suspension for his part in that Dec. 16 scrap at the Garden, and with him not set to hit the floor again until Jan. 22 against the Grizzlies, George Karl has chosen to focus his practices on combinations that can eke out wins until then. At this point, he hasn't run his two stars in the same five for even a minute. And that makes this innocent get-to-know-you, best-of-three match of major interest to the witnesses -- Rex Chapman, VP of player personnel, and two other team execs, Mark Warkentien and Bret Bearup -- all of whom took turns convincing owner Stan Kroenke that paying whatever luxury-tax considerations they might face over the next three seasons on the $57 million left on Iverson's contract would be worthwhile. For now, this is as close as anyone is going to get to seeing exactly how AI and Melo mesh in the heat of competition.

"I'm the greatest pool player who ever played!" Iverson immediately boasts. "I'll knock the 8 ball in on your ass on the break." He turns to his new 'mate. "Or do you want to break?"

Anthony demurs. "You can break. I want to see your technique."

Iverson sledgehammers the racked balls and drops a solid in the far corner. "You see it?" he asks, then drops another in the side. "That's your ass, Mr. Postman."

The short-term hope was that Iverson, who has four 30-point seasons in the books, would minimize the damage of losing Anthony's 31.6 ppg in the merciless West. But last season's Northwest Division champs are 3-8 since the Sixers superstar's arrival and have slipped into the final playoff spot. "It feels like I'm still in Philly," Iverson says. "I don't want to sit back and wait for Melo to get back, but teams are saying, 'We're not going to let you beat us.' That's the toughest part right now."

Anthony has used his forced viewing from home to get a better handle on where AI likes to spot up, but the team's struggles are hard to bear. "I feel his pain," Melo says. "My TV has been nearly broke four times now."

Both of them will say, though, that their worst frustration stems from having something they've dreamed about for so long be so tantalizingly near, yet still out of reach.

Two years ago, at the 2005 All-Star Game in Denver, Anthony was upset because he wasn't chosen to represent in front of his hometown fans. Iverson's mom, Ann, privately tried to cheer him up by saying she'd love to see him on the same team with her son. Then her son went out and showed how it could work. In the game, he scored only 15 points but collected 10 dimes as a setup man and took home the MVP trophy. Anthony, meanwhile, scored 31 as the MVP of the rookie-soph game.

They thought they might get Mama Iverson's wish last February, when then-Nuggets GM Kiki Vandeweghe quietly made a deadline pitch for AI; the Sixers mulled it seriously before saying no. But in December, when Iverson complained about the new offense with swingman Andre Iguodala at the point, GM Billy King told him to stay home and finally made his star available to the highest bidder. "Melo called me when the rumors started last year," Iverson says. "He said he wanted it to happen. Then we talked when they started up again. Of all the situations that were brought up, this is the place I most wanted to be."

Moments before he gets busy on the pool table, that enthusiasm is not necessarily apparent. Iverson talks wistfully about living in a loft across from the arena until he can find more-permanent digs. And a sprained big toe has him hobbling around the players' lounge in search of his sidekick. "Where's Melo? Get Melo," he says. "I'm waiting on this young fella. Damn."

As soon as Melo appears, Iverson perks up and the limp vanishes. He briskly approaches the rack of cues, picks one out and rolls it on the table to make sure it's true.

Finally, he misses, leaving the cue ball wedged against two striped balls near the rail. "Where I'm from you can play spacing," Melo says and moves the cue ball just enough to get off a shot. Hoots from everyone embarrass him into putting the ball back where it was. He tries a hopeless scatter shot.

"That's that Baltimore s---," says Iverson, who follows with a table-length beauty that cuts the two ball in the right corner. "I've got a machete over here!" he shouts after the ball falls.

When Melo is next up, he inadvertently bumps one ball as he lines up another. Iverson cracks, "How many balls you going to hit?"

Once again, Melo finds himself without a shot. He calls "all around the world," and Chapman can't hold his tongue. "We call that slop, where I'm from," he says. And Iverson piles on: "You got no shot. Deal with it."

A despairing Anthony says, "We need a foosball table."

Anthony eventually makes a brief run, calling each ball by the player who wears the number on his uniform. "Carmelo Anthony, down there ... Earl Boykins in the corner. Walk like a dog!"

But the 11 caroms off the rail instead of rolling along it, and that leaves Iverson with a very makeable cut shot on the eight. "I'm going to do it the hard way," he says, calling a long bank to the corner behind him. It's a decent effort, the ball stopping about six inches short. But Melo can't take advantage, and next time Iverson takes the easy duck.

"This game brought to you by ..." he says as he sinks the ball. "You want to run it back or make excuses?"

As Anthony pulls out the rack and collects the balls, Iverson sings, "I knnoowww you loove me ..."

Iverson's history with the 76ers would suggest the Nuggets have made a colossal mistake. He made his lone Finals appearance in 2001, an MVP season during which he averaged 31.1 points on a team whose next top scorer, center Theo Ratliff, got 12.4. Before and after, whether it was as a rookie paired with Jerry Stackhouse or as a nine-year vet paired with Chris Webber, Iverson failed to make the playoffs as part of a two-pronged attack.

Then again, although AI and Webber were the league's highest-scoring combo in their one full season together -- combining for 53.2 points a night -- no one would confuse Webber at the tail end of his career with an up-and-coming Anthony. And Iverson says that if playing the point puts him at the wheel, he'll still be quick to ask his co-pilot for directions. "There are no excuses," he says. "This team is better than the one I went to the Finals with. I want to see what the floor looks like with both of us on it. People can't do to him what they've been doing. If he was averaging 31 points before, he should get 34-35 with me."

Anthony is confident that Iverson understands his mission is to complement, not conquer. He may not have AI's room-grabbing bravado, but his place as the franchise cornerstone is secure. "He's been in the league 10 years -- he ain't going to play another 10," Anthony says. "He's here for no other reason than he wants to win."

The two Nuggets already have in their heads what they'll do down by one with seven seconds left. "One-three pick-and-roll," Anthony says. "Pick your poison."

Iverson agrees. "If two men step out on me and I throw it to him, he goes to work," he says. "But if they respect him like I know they will, then I turn the corner. They may not want to admit it, but players know in the back of their minds what they're going to be dealing with. And no one wants to play the two of us in a seven-game series, I can tell you that."

They've known each other since long before Ann Iverson got them thinking about joining forces, having grown up not all that far apart: AI in Virginia Beach, Melo in Baltimore. After Anthony's rookie season three summers ago, they began to run into each other at DC hotspots. And they hung in Athens as members of the '04 Olympic team.

But seeing them bare-chested and side-by-side is when it hits you. They're practically twins. Okay, so one is 6'8", 230, and the other six feet, 165. Both are copiously tatted; both prefer their hair in braids; both have a sliver of a mustache and a scraggle of chin hair. Even their café au lait skin is the same hue. On this day, they're also wearing look-alike gear: baggy gray cotton sweats and all-white leather low-cuts (Reebok for AI, Jordan brand for Melo). 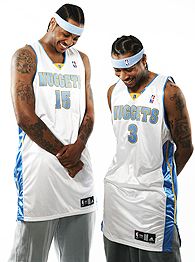 "That motherf---er ain't that handsome," Iverson cracks when the likeness is pointed out. Melo laughs.

They're similarly combustible, too, particularly when they feel wronged. That could mean an animated conversation or two in the heat of battle. "Imagine if we got into a fight on the court," Iverson says. "That would be the biggest news." He doesn't scoff at the possibility of its happening, but he's sure it would be misread as proof that they choose personal interests over winning. "People are concerned about which one of us is going to be selfish and jealous," Iverson says, and Anthony nods in agreement.

"If I was Kobe," AI continues, "I'd have begged Shaq to come back, and if I was Shaq, I would've begged Kobe to come back. Ego ain't going to get you nothin' except an early exit."

The second game ends quickly. Iverson tries to juke the rules when he buries a 10-14 combo in one corner pocket only to see the cue ball ricochet and follow the 8 into the other corner. He wants to play it as if he has scratched -- "Melo don't want to win like that!" -- but Anthony is, in fact, more than happy to accept the gift. It gives him the break to begin the rubber match. But after two miscues, Iverson stops him from making a third attempt.

"I know," Melo says, stepping aside in resignation.

"I know you know," says Iverson. As he prepares to break, he teases Melo with a twist on a line from Anthony's TV commercial: "Why do I have to take the shot when I know I already made it?"

"See you later," says Iverson, as he lines up the 8 and drops it.

Melo racks his cue, but Iverson isn't done. Injured forward Kenyon Martin walks in and asks, "What are you doing?"

Just being Iverson. He never stops coming, never defers, never relents. He hasn't for more than 10 seasons, so anyone expecting different now is dreaming. As he would say: You've got no shot. Deal with it.

Ric Bucher is a senior writer for ESPN The Magazine.