Editor's note: To recap the season, we asked our writers and editors what they would remember. Here, then, is everything you need to know about the 2005-06 season (so far). 1. Real pressure?
In Salt Lake City? It's not trying to make the playoffs and keep hothead owner Larry Miller happy. For Andrei Kirilenko, it's picking the right companion for the evening when cashing in the ultimate once-a-season hall pass from the wife. -- Marc Stein

2. Flagrant stupidity
Here's why Kobe Bryant can't be MVP. On Dec. 28, he commits a premeditated flagrant foul on Mike Miller (elbow to the neck), Miller makes the two free throws and the Grizzlies win 100-99 in overtime. Then Bryant brags about the elbow and gets suspended two games, which become two losses to Utah. One elbow, three Ls. -- ESPN.com

3. Moneyball has come to the NBA
The Houston Rockets sent shock waves throughout the league when they announced that little-known Celtics exec Daryl Morey would be the team's next general manager. Morey has little traditional scouting/coaching experience but has expertise in statistical analysis, which wouldn't be shocking in baseball but was completely unheard of in pro hoops  until now. -- John Hollinger

4. Trade The Franchise to save the franchise
Do teams get better when Steve Francis leaves? The Orlando Magic are 16-4 in the last 40 days, which is the second-best record in the league over that period. I guess Francis can commiserate with his new friend Starbury. -- ESPN.com

5. Stay where you are
Mike Montgomery is the latest coach to end a illustrious college career to go pro -- and fail. Coach K clearly knew what he was doing when he turned down the Lakers' job. -- Ric Bucher

6. Oh, Bosh
The Toronto Raps star got his props with an All-Star appearance, but, sad to say, it looks like he's on the KG career path. Like Kevin Garnett, Chris Bosh seems destined to be an underappreciated superstar stuck in a northern NBA outpost. Great city, weak spotlight. -- ESPN.com 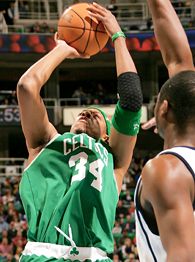 7. OK, we get it
Danny Ainge and the Boston Celtics are not trading Paul Pierce! Never mind that 10 months ago, they worked out a deal to exile him to Portland. And never mind that he can opt out of his contract in 2007 and might not want to re-sign with a team that's 32 games behind the Detroit Pistons in the East.
-- ESPN.com

8. The NBA ... It's Ban-tastic!
No more dressing like a bum on the bench. No more wearing women's clothing on the court. And no more Chris Andersen for two years. Style and substance abuse  the league has spoken. -- ESPN.com

9. Detroit devil deal
The Detroit Pistons have either the greatest fitness staff in history or a deal with the devil. Their top six guys have missed zero games because of injury, not counting Rasheed's brain cramps. -- ESPN.com

10. "Reg-gie, Reg-gie"
The newest member of TNT's broadcasting crew hit it on the head early in the season when he pointed out how the Pacers' chemistry problems were going to be a serious issue. Too bad Reggie didn't share his insight more when he was a player. -- Chris Sheridan

11. Taking the bullet
Thank goodness they weren't seriously hurt, but two NBA rookies were shot this season. Andray Blatche was shot in the chest while getting carjacked near his home in Virginia, and Julius Hodge was hit in the legs while driving on the interstate in Denver. What are the odds that two of the top 40 picks get shot in the same season? -- ESPN.com

12. Careful what you wish for
Larry Brown called it his dream job. It ended up being a nightmare. He left the helm of the Detroit Pistons to take over in New York, and then watched the Pistons roll to the league's best record while his Knicks sunk toward the bottom. -- J.H.

13. Psych!
Larry Bird wasn't walking through that door, so the Celtics signed Brian Scalabrine to a five-year, $15 million contract, in part because he supposedly has Bird's "brain type." Boston fans, more interested in his 2.7 PPG than his EEG, have a nickname for the dead meat at the end of the bench: "Veal." -- ESPN.com

14. Jerry's kids
New Team USA czar Jerry Colangelo managed to find 24 players willing to try out for the national team, but size and ballhandling are already concerns for the U.S. team that will go to Japan this summer for the World Championship. -- C.S.

15. Mom doesn't always know best
Hawks forward Al Harrington was quoted saying Clippers guard Corey Maggette would be traded to the Pacers for Ron Artest. Harrington heard the news from his mom, an Indy real estate agent who got a call from Maggette's mom about finding a place to live. Maggette then scared off the Pacers by suggesting his injured foot might not allow him to play this season, leaving Harrington to tell his mom he was cutting her off as a source. -- R.B. 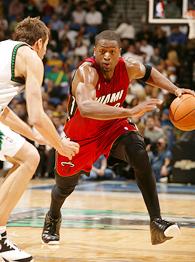 16. That's tight
When asked about the tights craze sweeping the NBA, Marcus Camby said, "I don't wear pantyhose." But Kobe, LeBron, D-Wade, and T-Mac put their fashion reputations on the line by donning the stockings. Then AI went way out on a limb when he broke out the white tights under the home white unis. Yikes! -- ESPN.com

18. Ray of hopelessness
Nine months ago, Sonics fans were handing out hugs when told Ray Allen was returning. Now, even as Ray-Ray posts another All-Star season, and threatens the single-season record for 3s, Seattle fans are ready to move Ray's contract and move on without him. In the NBA, things change fast.
-- ESPN.com

19. Bandwagon-ass cats
No players -- or fans -- carry a chip on their shoulder quite as well as those in Detroit. Even when the media showed the Pistons some love, Rasheed Wallace spat back, not ready to forget and forgive the lack of respect he'd been feeling: "We'll see them bandwagon-ass cats come May and June."
-- ESPN.com

20. Disrespecting the Kwame
When Kwame Brown joined the Lakers, and even his coach called him something unprintable, his status was downgraded from big bust to bad joke. But if next season he can continue his solid D and late-season surge (including a 15-point, 15-rebound game), he might finally get in a few grins himself. -- ESPN.com

Do you have some NBA 101 suggestions? Click here to send your ideas.