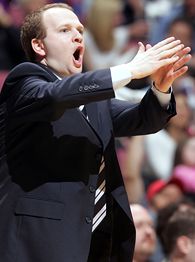 21. 14 is the magic number
Just when the ground under Lawrence Frank seemed a little shaky, his Nets went on a 14-game run. With Jason Kidd on his side and two 14-game winning streaks to bookend his coaching career (so far), things are looking up for LaFra. -- ESPN.com

22. Mystery Mike
He can post a triple-double, go for 41 or put up 21 and 14 in any given Grizzlies game. Which makes Mike Miller's mediocre numbers and passive play all the more mysterious, his likely Sixth Man of the Year award notwithstanding. -- ESPN.com

23. The Busboy
Mike Dunleavy can't play. OK, that's unfair. But is he worth the $44 million the Warriors just gave him? Not when you consider that he is, as ESPN.com editor Chris Ramsay calls him, "the poor man's Toni Kukoc." If Kukoc is The Waiter, that makes Dunleavy The Busboy. -- ESPN.com

24. Tony the Teacher?
Tony Parker schooled opposing point guards for layup after layup this season on his way to his first All-Star Game, but in romance he's the student -- or is he? First, girlfriend Eva Longoria said, "I'm the experienced one. I'm the teacher, especially about love." When she realized that made Tony look bad, she issued a correction: "When the lights are out, he's the teacher  and I'm the student." -- ESPN.com

25. Bogut not bogus
But not a superstar in the making, either. When the Bucks drafted the world's greatest Croatian-Australian hoopster, Andrew Bogut, at No. 1, they worked to temper expectations. They were smart. With a 15.4 PER (league average is 15.0), the 21-year-old Bogut has been solid, not stellar. -- ESPN.com

26. Foot fault
When shopping Ron Artest, the Pacers rejected the opportunity to acquire Corey Maggette because of a foot injury, and they settled for Peja Stojakovic. But Maggette is younger, better  and now his foot is fine. Meanwhile, the Pacers are stumbling. -- ESPN.com

27. Gettin' it
One was the eighth pick in 2000  the other the eighth pick in 2002. Both are thought to be the kind of player who "doesn't get it." But last week Knicks guard Jamal Crawford and Sonics forward Chris Wilcox were named the Players of the Week. Flashes in the pan, or flashes of the future? We'll see. -- ESPN.com 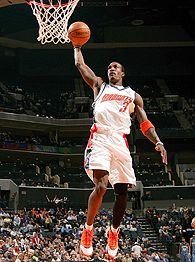 28. Even expansion teams have studs
Gerald Wallace isn't exactly a household name, but the Charlotte forward had a remarkable season. Wallace became just the third player in league history to average at least two blocks and two steals in a season, joining David Robinson and Hakeem Olajuwon in that esteemed club, while shooting 53.9 percent and throwing down several highlight-film dunks. -- J.H.

29. This is Bull
No team has less talent than Chicago. Check out John Hollinger's PER standings and you won't find a single Bull in the Top 50. Every other team (including the 14 non-playoff teams) has at least one guy ahead of Andres Nocioni (No. 63), yet the Bulls are in the playoffs. Nice job, Scott Skiles. -- ESPN.com

30. NYC still ridden with crime
Indecent exposure, robbery, murder  it's all at the Garden. The Knicks have lost 11 home games by double-digits -- five of those by 15-plus points. All this, while the fans spend an average of $70 per ticket to watch a roster with the highest payroll in the league. No fun, no refund. -- ESPN.com

31. Make the obvious choice sometimes
When the most NBA-ready draft prospect, who happens to be an All-American point guard, has a great workout for you and says he wants to be an Atlanta Hawk, don't get cute and go for another swingman. Take Chris Paul. -- M.S.

32. Eternal Uncle Cliffy
When Nets reserve Cliff Robinson first suited up for Portland in 1989, the Berlin Wall still stood. While the German barrier is now just souvenirs and dust, Cliff remains a solid wall down low and brings it nightly at age 39 as a key reserve for Jersey. -- ESPN.com

33. Superstars can't do it by themselves
Despite the usual banner years from Kevin Garnett and Paul Pierce, neither Minnesota nor Boston came close to earning a playoff spot. They even tried exchanging supporting casts halfway during the season, but shockingly, Michael Olowokandi and Mark Blount couldn't raise the fortunes of either team. Despite insisting they want to stay put, both now can prepare for a summer of trade rumors. -- J.H.

34. Reef at last, Reef at last!
Finally, in his 10th NBA season, Shareef Abdur-Rahim, broken jaw and all, is headed to the playoffs in Sacto. He's not the reason, you say? Well, if he's not going to be credited for his solid efforts with lousy teammates in the past, he can't be discredited because he has better teammates this season. Fair is fair. -- ESPN.com 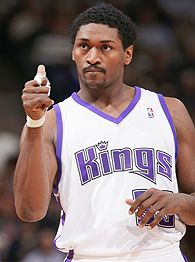 35. What I meant to say was
Take Ron Artest at his word at your own risk. First he wanted out of Indiana. Then he didn't. Then he didn't want to go to Sacramento. Then he did. Now that he's there, he can see the Kings winning a championship. Until, of course, he can't. -- R.B.

36. What I meant to do was
The best move GM Billy King made this season was the one he couldn't. The Sixers announced in early February that they had dealt Steven Hunter to the NO/OK City Hornets for two future second-round picks, but the Hornets reneged after examining Hunter's knees. Hunter returned to Philadelphia, promptly took C Sam Dalembert's starting job and doubled his career averages in March and April. -- R.B.

38. The Suns never set
Phoenix lost Amare Stoudemire to a knee injury, Joe Johnson and Steven Hunter to free agency and Quentin Richardson to a trade . . . and then kept right on winning as though nothing had happened. Newcomers Boris Diaw, Kurt Thomas, Raja Bell, James Jones, Tim Thomas and Eddie House ably filled the voids while Steve Nash and Shawn Marion kept the pedal pushed to the metal as Phoenix won the Pacific Division with surprising ease.
-- J.H.

39. Spurious
Why are the Spurs more vulnerable than expected? (Remember when San Antonio was a nearly unanimous pick to win it all, and some were predicting 70 wins?) Because their vaunted front office picked up some cubic zirconia when it signed Michael Finley (12.5 PER), Nick Van Exel (10.2) and Fabricio Oberto (10.2). Suddenly the Spurs are barely five deep and banged up to boot. For real. -- ESPN.com


40. Money can't make a mediocre center good
What is it about 7-footers that makes general managers lose their senses? Dalembert, Jerome James, Eddy Curry and Tyson Chandler signed contracts totaling over $200 million in the offseason  and proceeded to give exactly the same inconsistent performances that had marked their entire careers. -- J.H.

Do you have some NBA 101 suggestions? Click here to send your ideas.