ORLANDO -- The breathtaking athleticism was evident Monday when Chicago Bulls forward Tyrus Thomas met Shawne Williams a foot above the rim and stuffed the dunk attempt back to the floor.

With Thomas, already one of the NBA's most dynamic shot-blockers, the unexpected has almost become the expected. 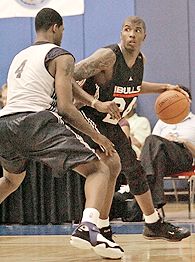 But it was a more mundane effort -- Thomas actually knocking down a couple of 15-foot jump shots -- that had defenders shaking their heads in Monday's Pepsi Pro Summer League in Orlando.

Thomas' improved outside shot hasn't come by accident. He said he's worked seven days a week so far this offseason, often staying in the gym until he makes 700 jump shots a day.

"I just want to use this week to get a lot better and put to use all the work that I've been putting in," said Thomas, the fourth overall pick of the 2006 NBA draft. "Everything that I've been working on, from my midrange game to my back-to-the-basket game, I'm trying to make them better this summer."

Indiana defeated Chicago 93-89 in the summer league opener Monday, but Thomas was clearly the best player on the floor. He made 6-of-13 shots and got to the free-throw line 10 times for 17 points overall. He also added seven rebounds, five blocked shots and two steals in one of the most complete performances of the day.

And Thomas did it even though he had to retreat to the training room in the third period after getting banged on the hip during -- what else? -- a dazzling blocked shot.

Somewhat undersized as a 6-foot-9, 215-pound power forward, Thomas knows that if he's going to become more of a scoring threat for the Bulls, he has to be able to hit the midrange shot. A threat to drive to the hoop at any time, Thomas made foes pay Monday when they backed off him and basically dared him to shoot. Knowing when to take that shot comes easier now that he's been in the league a year and played 72 games as a rookie, Thomas said. But that certainly wasn't the case this time last year.

"It was more just getting the feel of the game and knowing how to take my game to another level," said Thomas, referring to the transition to the NBA. "I know I still have a lot of stuff to work on, and I'm just keep trying to keep getting better."

MOST IMPRESSIVE: J.J. Redick, Magic -- The former college player of the year looked like he was back at Duke University on Monday night; he scored almost at will from all over the floor in Orlando's 85-74 defeat of New Jersey. 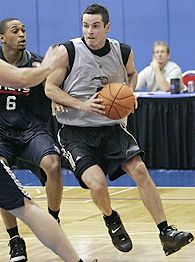 Redick, who saw only sporadic minutes in 42 games as a rookie for the Magic, scored 30 points against the Nets by making 7-of-18 shots, four 3-pointers and all 12 of his free throws.

It was a huge performance considering that Redick is basically auditioning for the Magic's vacant starting 2-guard job in front of new coach Stan Van Gundy. The position opened up last week when veteran Grant Hill informed the Magic that he had agreed to sign a two-year, $4 million free-agent contract with the Phoenix Suns.

So Redick could end up replacing the player he idolized as a kid (when he was growing up in Virginia as a true-blue Dukie) and learned under last season as an NBA rookie.

"I definitely feel like there's an opportunity available for me, and that's something that I've already talked to the coaches about," Redick said. "It's July, and they're certainly not promising anything to anybody. I'm just trying to use this week as momentum. I want to try and figure out what I need to work on the rest of the summer and then go into training camp healthy."

MOST DISAPPOINTING: Sean Williams, Nets -- Based on his monstrous talent, Williams was thought to be one of the steals of the draft when New Jersey snagged him with the No. 17 pick.

But the 6-foot-10, 235-pound power forward's NBA career got off to a horrendous start Monday when he grabbed just one rebound and committed eight fouls in 22 minutes of action (in the summer league, players foul out on the 10th foul). And to make matters worse, he scored just two points and turned the ball over four times.

Williams' off-court troubles are well-known. He was kicked off the team at Boston College this past season after just 15 games. He was worth the gamble to New Jersey because of his awesome ability to swat shots and gobble up rebounds on the inside. He swatted 75 shots in 15 games for BC last fall and once blocked 13 shots against Duquesne.

Williams is seen as an insurance policy in case the Nets lose Mikki Moore in free agency. Moore is hoping to get a five-year deal at the midlevel exception (approximately $5.5 million), but the Nets are reportedly offering no more than $4 million per season because of luxury-tax concerns.

• Chicago point guard JamesOn Curry, the 51st pick of the draft, showed right away Monday that he can be a dynamic playmaking guard in both the half court and in the open court. He meshed well with Thomas, twice feeding him for dunks on the fast break.

Curry came out of Oklahoma State after averaging 17.3 points per game, and questions circulated as to whether he could run a team as a pass-first point guard. With coach Scott Skiles, a pretty good point guard in his day, looking on, Curry passed his first test. He had four assists and two steals to go with his nine points.

• Miami rookie shooting guard Daequan Cook was noticeably nervous at the start of the Heat's game against Charlotte, but he settled down in the second half and finished with 13 points. Cook's biggest impact Monday came on the defensive end; he held Adam Morrison (14 points) to 2-of-6 shooting.

An Ohio State product who was the 21st pick in the draft, Cook said he'll have to make his mark on the defensive end to earn minutes with the Heat.

"Coach told me he was going to see where my guts were by putting me on Morrison," Cook said with a chuckle, referring to Heat assistant Erik Spoelstra, who coaches Miami's summer league team. "I was up for the challenge. I wanted to guard a guy like that because I knew it would give me a feel for what it would be like in an NBA game."

• The last image most saw of Joakim Noah came on draft night, when he was sporting a pin-striped suit with dark lapels and a funky bow tie. He complemented the draft-night look with a glowing grin after he was selected ninth overall by the Chicago Bulls.

But Noah's toothy smile was certainly subdued Monday as he was forced to look on from the bench because of a partially torn rotator cuff in his right shoulder.

Noah suffered the injury in February as the Florida Gators were in the process of topping South Carolina for the Southeastern Conference regular-season title. He played through pain over the final two months of the season, helping the Gators win a second consecutive national title.

The plan is for Noah to rehabilitate the injury throughout the offseason, hopefully avoid surgery and be ready for the opening of training camp in October.

"I want to play so bad because I'm a competitor," Noah said of his relegation to the sidelines. "When you're a competitor, you want to be out there helping your team win. It's hard to just watch and not be able to help the team out."

Doctors at Florida advised Noah that he didn't need surgery on his shoulder. Not that he would have missed the pursuit for a second title.

"We won [the national championship], and that was the only thing that mattered at the time," he said. "I have no regrets about my college career whatsoever. The shoulder bothered me, but it wasn't too bad to keep me from playing."

John Denton covers the Orlando Magic for Florida Today.com. Write to him at jd41898@aol.com.