The one-hour, six-minute game was a fitting end to an otherwise forgettable and uneventful week of basketball. 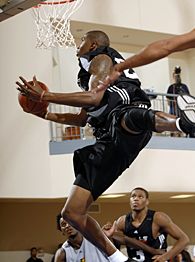 Unlike in the past few years when rosters were dotted with high-profile stars such as LeBron James, Dwyane Wade, Dwight Howard, Carlos Boozer, Tayshaun Prince and Al Jefferson, the majority of the stars from this past June's draft were off playing in Las Vegas. And clearly, the sort of buzz those players brought to the otherwise sterile atmosphere was missing.

The highest drafted player here, Chicago's Joakim Noah (No. 9), spent the week anchored to the bench nursing a partially torn rotator cuff in his right shoulder. The No. 17 pick, New Jersey's Sean Williams, looked like more of a project than first thought after routinely disappearing defensively and on the glass. And Miami's Daequan Cook, the 21st pick, didn't exactly strengthen his bid to back up Wade next season by needing four games to make his first two-point shot.

Instead, it was a group of second-year players who clearly stood out over the course of the 15 games this week. If you want rookies, head to Sin City. But in Orlando, it's the sophomores who dominated the all-tournament team. Here are the players who separated themselves from the relatively no-named pack this year:

• Power forward: Tyrus Thomas, Bulls -- Even in the low-key offseason, Thomas was as prickly with the media as ever. But that couldn't detract from the fact that he was hands down the best player on the floor in the three games he played.

The Bulls are convinced that his basketball skills will eventually catch up to his off-the-charts athleticism, and he certainly showed signs of that this week. His ability to make the midrange jumper now made him almost impossible to guard off the dribble. If he can hit that shot, he said, it would make it harder for coach Scott Skiles to keep him out of the starting lineup next season.

And no player drew more oohs and aahs than Thomas this week with his jaw-dropping blocked shots. His stuffing of Indiana's Shawne Williams a foot above the rim will undoubtedly be one of the lasting memories of the week.

• Small forward: Thabo Sefolosha, Bulls -- Sefolosha didn't always shoot the ball particularly well, but his nifty passing and decision-making clearly made him a favorite this week.

The Switzerland native bounced back from a stinker on Thursday with a dazzling 25-point, seven-rebound effort. He routinely snaked his cat-quick frame into the lane and got to the free throw line 10 times.

With Thomas, Sefolosha and JamesOn Curry all playing well this week, it reaffirmed Bulls GM John Paxson's abilities as a top talent evaluator. And when Noah, who worked out furiously twice a day during the camp, mends there will be an even greater logjam of young talent on the roster.

With Kirk Hinrich's extension and Andres Nocioni's new contract kicking in, and Ben Gordon and Luol Deng up for new deals, don't be surprised if Paxson soon peddles some of his young talent for a player who can give the Bulls some pop in the low post.

• Shooting guard: J.J. Redick, Magic -- After playing his fifth game in five days, Redick opened up his arms and examined the dozen or so scratches on both of his arms. It looked as if he had just wrestled a cat -- and lost.

Orlando, especially new coach Stan Van Gundy, was eager to see just how tough Redick was, and he passed the test this week with flying colors.

Repeatedly knocked to the floor and roughed up by opposing guards, Redick kept on firing. He led the league in scoring (19.8 ppg.), while also averaging almost four assists a game.

His legs tired as the week went along, causing his shooting percentage to dip badly. But after scoring 30 points in the opener and displaying some gritty toughness, Van Gundy announced that Redick could most certainly challenge for the starting shooting guard job for the Magic next season.

"I wanted to see what his approach would be and it's been great," Van Gundy said. "He played a ton of minutes and obviously his conditioning is at a high level. He's made it very obvious that he's willing to work and he really wants this.

"He's a better passer than I thought," Van Gundy continued. "And he's a tough kid. People have come at him and beat him up a little, but he hasn't blinked. And on defense he's made an effort. He's still got a long way to go, but his focus and effort have been great."

With Grant Hill off to Phoenix to chase a championship, it could be Redick, who fittingly grew up idolizing Hill, who replaces him in Orlando.

• Point guard: Marcus Williams, Nets -- He's so smooth with the ball in his hands and so good at finding cutters in traffic that you'd think he might someday become the next Jason Kidd. But because of Kidd, it might be years before he gets a chance to shine in New Jersey.

With Nets president Rod Thorn and head coach Lawrence Frank looking on, Williams impressed with his playmaking skills. As his 24 turnovers suggest, he's still prone to trying to make the home-run pass too often.

But all of his hours of working out in Los Angeles this summer with the likes of Paul Pierce, Trevor Ariza, Dorell Wright and Amir Johnson paid off offensively. His shot has progressed to the point where he's no longer a liability and his conditioning is no longer an issue.

Like Kidd, Williams did it all this week, averaging 16 points, 4.2 rebounds and 6.0 assists a game.

"Playing out here, I'm trying to show them that I can be a leader, make plays and play defense," Williams said. "I want to give the staff and front office some confidence in me that I can produce like this during the season." 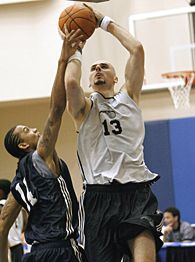 • Center: Marcin Gortat, Magic -- The 7-foot Polish center didn't make it halfway through the summer league last year before the Magic decided he needed another year of seasoning in Europe. For Gortat, who doesn't hide his desire to stay here, the news was both crushing and motivating.

"I was sad when I heard that but it gave me more energy to practice harder to improve my game," he said.

Has he ever. He was easily the best center in the league this year, swatting 3.2 shots a game while also averaging 10 points and 6.8 rebounds. His ability to run the floor, hit shots from the elbow and defend the rim just might win him a spot on the Magic's training camp roster come October.

When Orlando lost Darko Milicic to the Memphis Grizzlies in a messy dispute, it enhanced Gortat's chances of sticking with the Magic. And if he can stick around until the regular-season opener, he would become just the third Polish player in NBA history.

"I play in the NBA and I'll be a hero back in Poland," he said. "It would be my dream to play here."

John Denton covers the Orlando Magic for Florida Today. Write to him at jd41898@aol.com.