CLEVELAND -- All along LeBron James pushed back against the conventional wisdom from all corners: the all-knowing Phil Jackson to the egg avatar Twitter accounts. You know the storyline, that LeBron had to dig deep and uncork another one of his instant classic playoff performances to get the Cleveland Cavaliers back into the NBA Finals. He'd tried it that way before, spent the past two NBA Finals trying to live up to those standards, and it failed to add to his ring collection.

Not even the news that Kevin Love would be held out because he had not cleared the concussion protocol for the head injury he suffered in Game 2 was enough to lure LeBron into hero mode. James has always attempted to involve everyone, even at times to his detriment, unless absolutely necessary, and he remained in that mode. If the Cavaliers were going to get their first victory in these Finals it would have to be collectively. 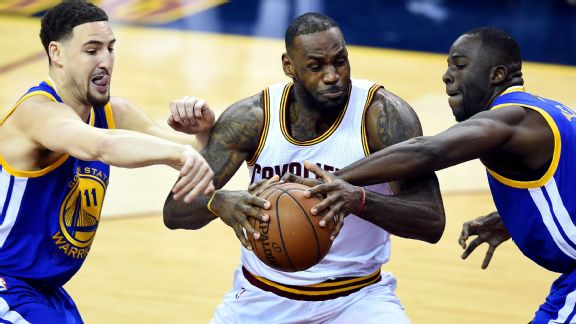 J.R. Smith took the Cavaliers' first shot, a 3-pointer that missed. Kyrie Irving scored their first points, then 14 more in the first quarter. Somewhere in the mix LeBron made his first four shots and the Cavaliers were rolling, off to a 33-13 lead that left few moments of doubt before the 120-90 final score.

"I didn't change my approach and I didn't take over this game," James said. "Kyrie pretty much took over the game, especially early and late. He closed the game out. He started the game, and I just sprinkled in my production along the whole game."

Irving broke into a smile at this, perhaps at the notion of the greatest force in the game today merely dropping in his contributions like a worker in a frozen yogurt store adding toppings to a customer's order. The moment passed, the smile left Irving's face, and James had one more point to make before he finished: "I just try to lead these guys to victory."

No doubt, this was about Tristan Thompson's pounding his way to seven offensive rebounds -- one shy of the Warriors' collective effort -- as strong an indication of how the Cavaliers simply had more want-to.

It was about Irving personally outscoring the Splash Brothers, 30-29. It was Smith making five of his 10 3-pointers while continuing the strong perimeter defense that has kept Klay Thompson and Stephen Curry in check. It was all of that in addition to LeBron's 32 points, 11 rebounds and six assists.

But since we all gravitate toward the bright stars in the middle of these galaxies, let it be said that LeBron did his part; Curry didn't. It's becoming a trend for Curry, who has yet to match his 30-points-per-game season average in any of the three Finals games.

He fell short of last year's 24-point average in two of the six Finals games. He was covered in the first two Finals games this year, thanks to stellar performances by the Warriors' bench and then Draymond Green. That was at home. The road calls for stars to lead the way -- especially the way these Warriors feed off the sight of Curry's shots dropping through the net from impossibly long distances. Instead he gave them no points, no assists and two turnovers in the first quarter, two points in the first half, 19 points for the game, most when hopelessly behind. It's simply unacceptable production from the two-time most valuable player, especially for a whole week. One off game is allowed. This is turning into an off series.

"It's not about living up to a certain expectation other than the one I have for myself," Curry insisted. "And I haven't done that, or I didn't do that tonight, and I have to be better."

Curry tends to articulate desires for the tangible, objective measures, such as victories and made 3-point shots. He's less outspoken about more nebulous titles such as best player. But he wouldn't have risen to the upper heights of the NBA, wouldn't have won those back-to-back MVPs without those ambitions. Now he's hurting his case.

You'll notice there wasn't any speculation about where the Warriors stood vis-à-vis the Showtime Lakers or Michael Jordan's Bulls after this game. They're still stuck on 87 combined victories from the regular-season and playoffs, still tied with 1995-96 Bulls. They can break the tie with a victory in Game 4 on Friday and move to the brink of the championship that would undeniably place them in rarefied NBA air.

But they were served a reminder that they'll have to take it from the Cavaliers and that this dream season can be taken away from them in an instant. In the second quarter, Cleveland's Timofey Mozgov stuck his leg out on defense and bruised Thompson's left thigh -- "It seemed kind of dirty to me," Thompson said -- and there were some worrisome moments for Golden State as he limped to the locker room, his availability for the rest of the game and the series momentarily in doubt.

But he returned and managed to make a couple of shots, undeterred from driving to the basket and even providing inspiration to Curry.

"That's the way we have to play in the first six minutes and not wait for them to throw the first punch or be on our heels," Curry said. "And that will be the 'adjustment,' if there is one, for Game 4."

Curry provided the quotation marks around "adjustment" by shimmying his shoulders, the only time he made anything close to his signature celebratory move all night.

He hasn't been himself this series, hasn't been a star. LeBron would tell you star performances aren't always what they're cracked up to be. But he also knows that in the NBA Finals, they're a pretty good place to start.