CLEVELAND -- For the longest time Thursday night, it was incredibly quiet around Stephen Curry in the Golden State locker room. As teammates murmured to each other across the room, he sat in his chair, head tilted toward the ground. Nobody dared disturb him, probably because he looked less than thrilled. The lockers around him were vacant. Draymond Green had exited to conduct an interview in an adjacent room. Klay Thompson had gone early to his news conference because he wanted to get out of Cleveland on the first available bus.

Around Steph Curry, total silence. On the internet, absolute bedlam, as the very uncontroversial MVP became the focus of controversy after the Warriors' 115-101 loss to the Cavaliers in Game 6 of the NBA Finals. After LeBron James drew Curry's sixth foul, with 4:22 remaining, Curry threw his mouthguard in frustration, as he is wont to do when he reaches his emotional limit. In the past, he has called the mouthpiece throw "voicing my opinion" -- a way of displaying anger without causing an international incident. It's a move that's part reflexive, part calculated. In a 2014 playoff game against the Clippers, after not getting a call, he tossed the guard in search of a technical (he got his wish). "That was my prop that time," he said then. "I needed something. I had good aim with it, though."

On Thursday, Curry's aim was off, and the saliva-slathered plastic flew at the son of a Cavs minority owner (Curry later apologized to his accidental target). In Game 6, the Warriors couldn't even get being mad right. That wasn't the only controversy. Curry's wife, Ayesha, upset over the calls her husband received, was in the news for tweeting NBA conspiracy theories. And so the online world grew quite noisy around Stephen Curry, reaching an accusatory tenor once reserved for LeBron. Why wasn't he playing better? Why isn't he playing like the MVP? At least Curry's coach had his back.

There's little doubt that Kerr went into his postgame news conference calmly expecting to incur a hefty fine. He'd met with Warriors GM Bob Myers before taking the dais. It was time to pull out all the stops for Game 7. 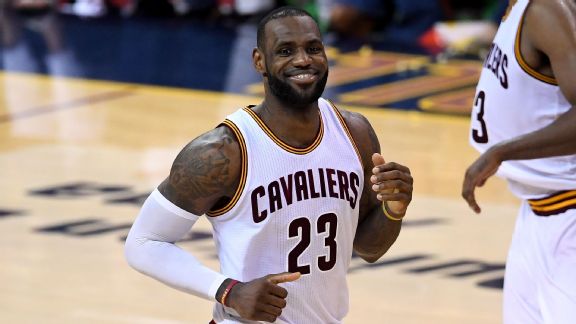 "He should be upset," Kerr continued. "Look, it's the Finals and everybody's competing out there. There are fouls on every play. It's a physical game. I just think that Steph Curry and Klay Thompson, the way we run our offense, we're running, we're cutting through the lane, we're a rhythm offense. If they're going to let Cleveland grab and hold these guys constantly on their cuts and then you're going to call these ticky-tack fouls on the MVP of the league to foul him out, I don't agree with that."

Many would take exception to that "MVP of the league" line right now, even if Curry's season was indeed dominant. For whatever reason, his unanimous selection has irked some people, and "unanimous" has become a cudgel that critics use against Curry in these currently trying times.

Curry didn't exactly play poorly in Game 6, but James played far better. And right now, that's the dominant story. It doesn't help that Andrew Bogut is out, Andre Iguodala is dealing with back spasms, Festus Ezeli has yet to settle into his role and Harrison Barnes can't make a shot.

When the Warriors go as cold as they did at the start of this game (11 points in the first quarter), it'd help if Curry could get to the rack. For whatever the reason, that aspect of Curry's skill set has abandoned him in these playoffs. The MVP who shot 64.5 percent inside 5 feet this season is now shooting 50 percent from that distance in the postseason (he's at 45.5 percent in these Finals).

Again, after the game, Curry's right knee was heavily bandaged, which either means nothing or explains everything, depending on whom you ask. Should he fail, should the Warriors fail, history won't care about such details. Win, and it's an explanation for why he hasn't been his regular-season self. Lose, and it's an excuse.

One of Curry's close-in misses was rejected viciously by James, who certainly enjoyed the moment. Curry was pressed on what James said to him, but refused to divulge details of the conversation. Asked about the gist of James' message, Curry said, "Nothing," after pantomiming sealing his lips shut. It seemed like a knowing way for Curry to differentiate himself from James, who has been conveying Green's taunts to the media.

Perhaps Curry has taken the moral high ground on a minor issue, but history does not care. This is a results business, and James is getting better results. Though angered, frustrated and certainly disappointed, Curry at least isn't yet defeated. He was seen pointing at the Cavs bench before exiting the game. He welcomes one more challenge, one last hope to salvage the 73-win season. His Warriors are battered and depleted, but at least they're home. Steph Curry & Co. have 48 precious minutes left. Inside those minutes, the noise of the world fades. Inside those minutes, they can still right the wrongs of the past few days.