You should feel free to dislike Ayesha Curry. You can point out that the 27-year-old's celebrity is derived from her husband, a unanimous MVP whose overwhelming popularity has taken his brand from Nashian David to LeBronified Goliath in under two years. You can even retch at the recipe for smoked salmon scramble in her new cookbook, "The Seasoned Life: Food, Family, Faith, and the Joy of Eating Well" -- whether or not you noticed Stephen Curry looming, unsubtly, in the background of the cover.

But when Ayesha attends Game 6 of the NBA Finals in Cleveland ... watches her husband pick up his sixth foul with 4:22 remaining ... watches him get ejected, for the first time ever, after exasperatedly (and accidentally) whipping his mouthguard at a fan ... and thus decides to tweet, "I've lost all respect sorry this is absolutely rigged for money ... Or ratings ..."? 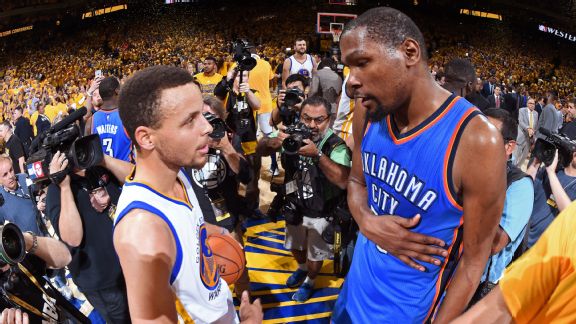 Before she could delete the tweet, many immediately dismissed her thoughts as embittered, tinfoil-hat ravings that nobody truly connected to the game would ever begin to believe, much less vocalize. The more misogynist corner of Twitter played the role of unfrozen caveman. (On Saturday, Steph Curry even joked about cutting off internet access at his house.)

While Ayesha might sound outlandish, she is hardly alone.

You want an All-Star player? Here's Ray Allen during the 2001 Eastern Conference finals, which his Milwaukee Bucks lost to the Philadelphia 76ers, who would go on to play the Lakers for the title: "The bottom line is about making money. The league knows Philadelphia is going to make more money with L.A. than we would with L.A."

You want an MVP? On page 66 of ":07 Seconds or Less," Jack McCallum's book about the hard-luck 2006-07 Phoenix Suns, the aforementioned Steve Nash earnestly asks his coach, Mike D'Antoni, "You don't believe in those conspiracy theories, do you?"

You want an NBA owner? Though Mark Cuban flatly denied it, the Miami Herald reported that, after the controversial end of Game 5 of the 2006 NBA Finals, the Mavericks owner "turned to [David] Stern and other NBA officials who were seated at the scorer's table and was overheard to shout venomously in the jubilant din, '[Bleep] you! [Bleep] you! Your league is rigged!" (The league fined Cuban $250,000 for several acts of postgame misconduct.)

You want another wife of an NBA champion? Meet actress, officiating critic and self-described NBA conspiracy theorist Gabrielle Union. Less than two months ago, Dwyane Wade's better half got in an online feud about holding zebras accountable with the Twitter account of the National Basketball Referees Association.

You want a plugged-in writer? On page 345 of Bill Simmons' "The Book of Basketball," he includes the following footnote: "Let's just say that from 1993 to 2006, the NBA may have dabbled in pro wrestling tactics a little. I tried to sweep it under the rug in this book, because that's what people do when they're in love with someone: They lie for them. And I love the NBA."

You want a former official? Welcome back, disgraced ex-referee Tim Donaghy, who resurfaced this week to tell Sports Illustrated that Golden State Warriors forward Draymond Green was ultimately suspended in these Finals because the league office wanted to keep the Cleveland Cavaliers alive. (Donaghy served 15 months in prison after pleading guilty to wire fraud and transmitting wagering information across state lines.)

Which is all to say, as simplistic and unfounded as so many of these theories are, plenty of people in and around this sport obviously love wearing tinfoil hats. And to be perfectly honest? At some point, the NBA can't be shocked when an emotionally charged Ayesha Curry fashions one of those hats in the middle of Game 6. Not when it chose Scott Foster, a referee who famously exchanged 304 phone calls with Donaghy in a four-month span, to be on the floor -- even if Foster was cleared by the FBI and in a 133-page report commissioned by the league.

"I hear it, and it's the most sensitive issue for me, and it goes to the core integrity of the league and, frankly, to my integrity," NBA commissioner Adam Silver told ESPN Radio. "And all I can say is, we do the best we can."

But understand: While the perception of conspiracy is of grave concern, not one soul on this planet is going to watch the Euroleague instead. In fact, there is a reason why Ayesha's commentary has sparked a news cycle of this magnitude. As fans and critics, we love few things more than proposing conspiracy theories -- or shooting down those who do.

Contemporary pro basketball, after all, is a soap opera that allows both men and women to obsess about the feelings and relationships of famous, familiar characters. We are here for betrayal (do LeBron James and Kevin Love secretly hate each other?) and idol smashing (Steph Curry isn't hurt, he's overrated!) and workplace drama (will Kevin Durant abandon Oklahoma City?). We are here for the Frozen Envelope and phantom fouls. We are here for gossip.

So feel free to dislike Ayesha Curry. Feel free to loathe her husband, for whatever reason.

But it's only fair to admit that the last thing you really want is for her to shut up.