They've beaten so many people so many different ways for so many years, dealt with Father Time and Mother Nature, walked on water by playing together through parts of three decades and lost to Air.

And now comes Wednesday night's Game 5 at Arco Arena and the chance at a finish for all time, and not just because the Kings could lose and possibly blame someone other than the referees. John Stockton and Karl Malone might be together for the final time.

The tough part is to know whether to celebrate the memory-lane moment, appreciating all that has come before, or to be saddened. The one sure thing is that the only wrong answer would be to take it for granted.

Neither has said it will be the end when the Utah Jazz gets eliminated by the Kings, whatever slim hopes that existed in the first place for a series upset replaced by a 3-1 deficit. But it's tough not to read the pick-and-roll on the wall. The adopted Utahns coming back together next season would be as improbable as the Jazz coming back to beat Sacramento this week.

Stockton, still loving the games but increasingly missing being a full-time family man, will be a free agent and will strongly consider retirement.

Malone, who was never going to retire, contrary to speculation early in the season, will be a free agent and will strongly consider leaving the Jazz.

Not only that, but coach Jerry Sloan, with one season left on his contract, will consider stepping down himself.

Archeologists who researched their early days together note that the trio has been joined since the fall of 1985, when Malone arrived from Louisiana Tech as the No. 13 pick, after Benoit Benjamin, Jon Koncak, Joe Kleine, Keith Lee and Kenny Green, among others, had been drafted. On Dec. 10, 1988, when Frank Layden resigned as coach, assistant Sloan got the battlefield promotion, never assuming he would last a full season let alone becoming the longest-tenured manager or head coach among the four major sports.

Basketball -- sports as a whole -- has never known anything like them. They have gone from small towns in Washington state (Stockton), Louisiana (Malone) and Illinois (Sloan) to being joined in NBA small-market Salt Lake City. They're unpretentious, clocking in Day 1 of every season in shape and ready to go, rather than using training camp as a conditioning exercise, like so many peers. They go hard, get in your face, maybe even punch you in the face if ya gotta problem with something.

Each departure, if they come, will be big news, but Malone's exit will be the loudest. He has a bond with owner Larry Miller, even through their numerous food fights, but feels a rift with VP of basketball operations Kevin O'Connor, even if O'Connor doesn't feel it and strongly denies trying to nudge the Mailman to the door. Malone doesn't mention O'Connor by name, but the implication is clear.

The situation is as much disappointment as frustration, and there is plenty of both. Malone loves living and playing in Salt Lake City, but he has accepted that the pursuit of Kareem Abdul-Jabbar's career scoring record may come in a different uniform. He will play on, even if it means taking the mid-level exception to sign with a contender, chasing the elusive title and Abdul-Jabbar at the same time.

"My decision, I want it to be quick and swift," Malone said. "I don't want to string anybody out. Obviously, whether the respect is there from them or not, I want to give them the respect to know what I'm going to do. And I'm not going to hold them hostage. But you just get the sense, to me, that it's kind of like now they're doing me a favor. I don't know.

"You try not to, but you hear people saying it might be better off if you move on if you want to play. And then you start to get that kind of feel, not from everybody, but say you get it from one or two key people in the organization. Do I 100 percent think Larry Miller wants me to go to another team or retire? Absolutely not. Do I think another particular person in that area would like to see me, with dignity, kind of move on? Yeah. Because they want their people in there."

"I'm preparing myself in a way that I think that a lot of things will happen this summer," Malone responded. "I have to prepare myself for whatever. Some little hints have been dropped already to the fact that if Karl wants to come back he's got to take a substantial pay cut. The economics of the team. If (agent) Dwight Manley is involved, he's got to deal with Kevin O'Connor. If Karl's involved, he can deal with Larry Miller. You know, there's a way you can say goodbyes without having to say them."

Malone is concerned about being kept around the next two years in the name of nostalgia and the chase of the scoring record, not because he is really wanted, but it's getting contentious either way. Miller, upset his two-time MVP publicly debated his future at a time when the focus should be on the playoffs, fired back. 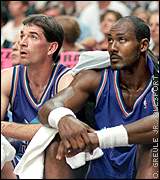 "Karl has gone on interesting forays, I call them, at different times, and it appears he is going on another one," Miller told Utah reporters. "The worst thing you can do right now is these forays. I've put up with them, but I'm not going to put up with them now. If he wants to get into a (shouting) contest, let's go ... If Karl said I don't have the guts (to tell him to move on), I've got a problem with that. When I read, 'They don't have the nerve' -- oh yeah? You want to try me? Let's go."

Going being one of Malone's options.

Stockton, meanwhile, went into last summer considering retirement and will renew the debate. When he thinks now about the future, he said, "It's kind of a day-to-day thing." Acknowledging that much is quite telling for someone like Stockton, who generally has said he won't worry about the future until the offseason.

"Playing?" Stockton said. "I enjoy the games. Certainly there are difficulties to being part of this league, and that's not new to this season. Especially when you have a family like I have and they're growing older. The other stuff isn't as fun. But I sure like playing."

He has a wife and six kids at home. Will he come back and groom Raul Lopez, the projected backup for 2002-03 before a knee injury ended his rookie season? Will he retire and not have to spend weeks away from the family? Back and forth. Day to day.

"I think they're going to want it quickly," Stockton said of his decision. "Whatever direction I go, the team needs to make moves. I don't know that it's fair to wait a long time either way. If I come back, I'd like to have the best possible team, and to do that they need information. So I'd like to try to give them an answer soon."

And then there's the coach. Sloan said, "I think this is the worst coaching job I've done" in his 15 seasons and that "when you watch our team play, I think they're probably as unorganized at times as any other team I've ever had." Everyone knows that's just "Jerry being Jerry," as King coach Rick Adelman noted.

"They lead the league in field-goal percentage," Adelman said. "They're not that disorganized."

Sloan, Mr. Bottom Line, isn't pleased. He thinks his team is selfish, although not as much as last season. He gets a lot of questions from reporters wondering about the potential for life after Stockton and Malone.

"I never think about that," Sloan said. "People have asked me that question a great deal, but my job is day to day. We have lost players here before. We've lost a couple good players."

But these are not just any players.

"Yeah, but it doesn't make any difference in the coaching job," Sloan said. "You're going to say, 'Well, I don't have John and Karl anymore?' If they don't show up tonight, what am I going to do? And anyway, any decision you'd have to make, they would come after the season's over. You don't make those decisions in the middle of the year. They have decisions to make. I have. Everybody has a decision to make in this business, whether they're here or I'm here or whatever."

Maybe he just sounds like someone who's had enough. Is there any part of you, Sloan is asked, that feels like you may not want to be here next year?

The longest-tenured coach or manager in any of the four major sports chuckled.

"Every day I go to work, I don't want to be here," he said. "You've got to realize that this is a tough job, day in and day out. Every day. Now, if I wake up tomorrow morning and don't have the energy and I don't have the desire to go deal with the things you know you've got to deal with? When's that day going to come? I don't know. Maybe it'll come, maybe it won't. I have no idea what's going to happen. I have some thoughts like everybody else."

There is a lot of that going around. Thoughts about the future in Salt Lake City. Or lack thereof.

Scott Howard-Cooper, who covers the NBA for the Sacramento Bee, is a regular contributor to ESPN.com.