Friends, Romans, countrymen, lend me your ears
I come to bury Caesar, not praise him
The evil that men do lives after them;
the good is oft interred with their bones.
— Mark Antony in William Shakespeare's "Julius Caesar" 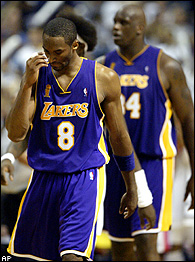 AUBURN HILLS, Mich. -- Me? I come to praise the Lakers, not bury them. The shortsighted and overblown expectation that they'd win this year's championship has done them a mighty disservice, for it has far too many people believing that this season has been a disappointment.

Point in fact, it's been nothing short of amazing.

Put aside all that tired talk of four Hall of Famers and the sheen that comes from winning three of the previous four championships and look at who the Lakers really were this season: