AUBURN HILLS, Mich. -- Just 13 hours after suffering a thorough 88-68 defeat, the Los Angeles Lakers were ready to admit that the Detroit Pistons are the better ... hustlers. 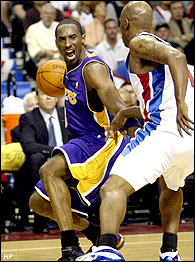 As in effort, not con men. Although the Lakers are doing a good job convincing themselves they're not inferior to a Pistons squad that just drubbed them by 20 to take a 2-1 lead in the NBA Finals.

"Why have they been the better team? They're not shooting the ball well," Gary Payton said. "What they're doing is they're out-hustling us. That's what it is. They're getting second and third shots. I think neither team has played well, except they've got the wins. They've done the dirty work to get the wins."

"I don't think both teams have played the way they can play. ... They're just fortunate to get two wins out of three."

The numbers after three games indicate Detroit has had more energy. The Pistons hold decided advantages in every statistic dependent on putting forth the extra effort, stats like offensive rebounds (43-29) and free-throw attempts (91-56).

"We just have to come out and be more aggressive. ... We have to establish to them and establish to the referees that we can be aggressive, too -- don't (let the refs) call all of the calls on us," Payton said. "(The Pistons) have established that they're an aggressive team. I guess (the refs) are thinking we're a soft team and we can't play that way."

"They're just out-hustling us right now," Kareem Rush said. "They're getting all the loose balls and all the rebounds."

The other consensus among the Lakers: improved execution on offense.

Forget the fact that the Pistons have harassed opponents into 39 percent shooting and allowed just a tick above 80 points a game in the playoffs. An improved attention to detail will bring better shots against Detroit's double-teaming scheme against Shaquille O'Neal and Kobe Bryant, who were held to a combined 25 points in the Lakers' lowest offensive output ever for a playoff game.

"We just need to make a few adjustments and just go out and execute and be more careful with the ball, and if we do that, then we'll be fine," Shaquille O'Neal said. "It's all about us. It's all about what we need to do. They are not doing anything that's, you know, putting us out of character."

"It's the type of defense that we've seen before ... really what it boils down to is us executing (the game plan)," Kobe Bryant said.

The Laker who leads the team in floor burns and has made sure the ball has kept moving from one superstar to another during L.A.'s playoff run has been Karl Malone. His presence is crucial to any hope of a victory Sunday, even if he's standing out there with one good leg due to the reoccurrence of a right-knee sprain.

"I think it's more execution," Malone said. "How much adjustment do we have to do right now? You adjust as the season goes on. When the playoffs come, it's not about anything other than that.

"Execution has a lot to do with it. We had some unforced turnovers last night. You just have to do the simple passing, which is what we did not do as a team. You have to execute that."

Joe Lago is the NBA editor for ESPN.com.