DALLAS -- Mark Cuban calls this the best and most balanced assemblage of talent in his ownership tenure.

Erick Dampier calls himself the best center in the West.

Calls have been coming into the local talk shows for months to anoint these Mavericks as better equipped for title contention than ever before. Better defensively than they've been for years. Better off without Steve Nash, specifically. 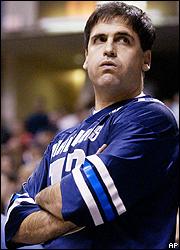 What you can say without debate is that the Mavericks who went 58-24 to generate all that chest-pounding have disappeared, most likely for good. The only way they can validate any of those claims now is to rally and win four of the next five games -- three of them in Houston -- after the Rockets dumped the new and balanced and purportedly playoff-friendly Mavs into a 2-0 sinkhole.

You should not undersell the brilliance of Tracy McGrady and the resilience shown by several of T-Mac's unheralded teammates in winning the first two games -- both on the road -- in this Interstate 45 first-round showdown.

When one of the hottest teams in the league starts the playoffs with two home defeats to a lower-seeded foe, the laws of second-guessing demand an immediate inquiry into everything going wrong for that team.

Herewith, then, is the first stab at a Top 10 list:

1. The struggling superstar
No one disagreed with Dirk Nowitzki after his 5-for-19 nightmare in Game 1 when the big German suggested there was little chance he'd have "two games like that in a row." But he did.

While McGrady continues to play the best all-around ball of his life, Nowitzki was only marginally more effective in Game 2, supplementing his 26 points with just two rebounds. Although he scored 10 points in Monday's fourth quarter on 4-of-6 shooting, including a clutch jumper in the final 10-plus seconds that looked as though it might force overtime, Nowitzki declined several invitations to attack Ryan Bowen in the post and even passed out of a late post-up against Jon Barry. Nowitzki's reluctance to put the ball on the floor when McGrady checks him is understandable, but too often he has been timid against Bowen, refusing to attack the rim.

The Mavericks' offense is flowing so poorly that Dallas needs Nowitzki, more than ever, to get to the line or create scoring opportunities for his teammates through his aggressiveness. Instead, the Rockets have happily watched Bowen -- whose only real weapon defensively is effort -- hang in there gamely and negate the damage Houston expected from Juwan Howard's absence. The only solace for the Mavericks, meanwhile, is that Nowitzki hasn't looked this lost in the playoffs since the first two games of the first-round series against Utah in 2001, which also happens to be the only series in club history in which Dallas has recovered from a 2-0 deficit.

2. The lack of a locker-room leader
Nowitzki is a lead-with-his-game type. Michael Finley has scored only 15 points in the series and was never a hugely vocal leader even in his All-Star days. And Jerry Stackhouse doesn't get enough minutes to be the Mavs' No. 1 in-your-face teammate.

This is one area where Nash's departure didn't sting too badly, because Nash really wasn't a rally-the-troops guy, but it's fairly evident that Dallas' players aren't following the lead of anyone but rookie coach Avery Johnson these days. They've been lacking an emotional compass since the departure of Nick Van Exel, and the Rockets, rallying around McGrady, have capitalized.

3. The tenseness
Johnson brings Gregg Popovich-style intensity to the Mavs' bench, which was initially celebrated in the wake of Don Nelson's laid-back reign. But Mavs insiders say the Lil' General has been even more tense than normal in his first playoff series as a coach, and that appears to have trickled down to the team.

Houston maintained its composure throughout Game 2, surviving Dallas' surprise pressing and the swarms it threw at McGrady in the backcourt and the frontcourt. The Rockets sported a collective confidence that suggested that, even down seven points with 5:41 to go, they never thought they were going to lose.

The Mavericks? They've looked jittery in both defeats. Instead of playing freely, they look afraid to make mistakes.

4. The centers of attention
Dampier's argument that the NBA offers only one center more dangerous -- a certain Shaquille O'Neal -- isn't being backed up here. Not even close.

In Game 1, Dampier wasn't the second-best center in this series: Yao Ming (though limited to 20 minutes by foul trouble) and a creaky Dikembe Mutombo combined for 19 points and 16 rebounds. And while Dampier (14 points and nine boards) had the occasional moment in Game 2, he was among the many Mavericks helpless to stop Yao in pick-and-roll coverage.

5. The role players
Dallas is billed as the league's deepest team. The Rockets' bench has ignored its reputation to outscore the Mavericks' bench in both games, with Mike James and Barry ranking as the most consistent reserves in the series to date.

Scratch that. Consistent isn't the right word. While so many Mavs have been shrinking, Houston's role players have been downright cocky, feeding off the belief that McGrady and Van Gundy give them.

"You just have to believe in your stuff," Barry said. "Coach has been telling us that for six weeks. Even when we fall behind, we believe in our stuff."

6. The defense
Dallas' drastic improvements defensively, especially during the final 18 games of the regular season, made it easy to say that Nash was hardly missed. During that finishing kick, after Johnson replaced Nellie as the full-time head coach, Dallas held opponents to 92.3 points per game on 42.7 percent shooting. And as we've said numerous times lately, Dallas isn't going to lose too often if the opposition can't get to 93.

In this series, though, Houston has shot 51 percent from the floor in the first two games while averaging 105.5 points. Which means the new Mavericks aren't guarding any better in the playoffs than the old Mavericks.

7. The offense
For all the blame Nowitzki must shoulder, it can't be overlooked that he's rarely presented with an easy shot. Jason Terry has been hitting when he looks for his own offense, but nothing Dallas has been running against the Rockets puts Nowitzki in prime scoring position.

The ball and player movement Johnson stresses has vanished. The ball is pitched to Nowitzki at the elbow or on the wing, and what often ensues is little more than standing around.

Nor is Dallas running the ball. The Mavs managed just four fast-break points in Game 2 despite pounding Houston on the boards (41-29).

Then again, maybe we shouldn't be surprised. Even without Nash, Dallas was one of the top five teams in the league in terms of protecting the ball, averaging fewer than 13 turnovers per game. Yet there's a footnote that largely went unpublicized: Dallas finished 26th in assists, supporting the notion that Nowitzki has been working harder than ever for his points.

8. The bad timing
Dallas entered the playoffs with the best record in the whole league against playoff teams at 28-14. That's right: No. 1. But timing is everything and the Mavs suddenly find themselves trying to deal with a dangerous duo clicking as never before. They're not Shaq and Kobe Bryant yet, but T-Mac and Yao have never looked better together. McGrady, especially, has been sensational. The ball is in his hands, and he's controlling everything.

The Mavericks had 20 more free-throw attempts than Houston in the series opener and have totaled almost twice as many offensive rebounds (33-17) in the two games.

10. The irony
In its previous incarnations, Dallas used to be the NBA's king of Small Ball.

Now look: This has become a Small Ball series and the Mavericks can't keep up.