Mr. Play The Right Way should be absolutely ashamed.

Ashamed of himself for letting his latest bout of wanderlust encroach on the Detroit Pistons' attempt to repeat as NBA champions, in the heart of a playoff run. 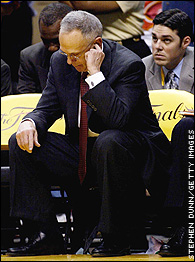 As for the Cleveland Cavaliers ...

They should simply be mortified.

Flat-out freaked out by the path they're apparently choosing.

Dan Gilbert has endured considerable criticism since buying the Cavaliers from Gordon Gund, some of it unwarranted.

Gilbert's obsessive pursuit of Larry Brown as the man to run the Cavs' front office and assemble a title-contending team around LeBron James  and not coach it  warrants the loudest possible criticism.

For it's one of the most ridiculous ideas I've ever heard ... and that's excluding all the issues of propriety.

Larry Brown cannot be an effective personnel chief in the NBA. He can't be. He won't be. He sours on players far too quickly to be a levelheaded talent evaluator. He is chronically, famously fickle.

Clevelanders are concerned that LeBron might bolt in free agency in a few years?

If Larry is their general manager, Gilbert and the locals are advised to be far more concerned that Brown might try to ship LeBron somewhere before next February's trade deadline.

That's no joke. That's Larry. That's how he is.

As a strategist, he's one of the best ever. He's bettered every team he's ever coached, and many of those teams nose-dived as soon as he left. The Hall of Famer didn't need that NBA championship last spring to be regarded as one of the all-time X-and-O greats. He already had an NCAA title, remember.

Yet there are reasons Brown never won a title until he got to Detroit, and the list of reasons is not limited to tough competition and Brown's penchant for grating on even his stars. In just about every stop except Indiana, where the ever-shrewd Donnie Walsh maintained control of personnel matters, Brown has had too much front-office input.

It's bad enough that his daily demands have worn down some of the most coachable stars in recent memory: David Robinson, Reggie Miller and Danny Manning, to name three. Yet it only adds to the negativity swirling around Brown's teams that he's always pushing harder for trades than any of his bench brethren. Once wind of that gets back to the players ...