SAN ANTONIO  They love hearing this stuff. They live for it, really.

No Pistons team has won in San Antonio since 1997.

No losing team could possibly recover from the killer nature of Game 5's ending. 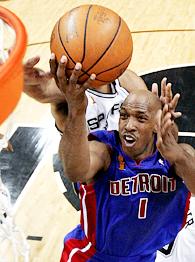 The Detroit Pistons didn't have enough room on the locker-room greaseboard for all the motivation in circulation Tuesday night. They simply soaked in the copious amounts of doomsday chatter, thanked local authorities for making the plans for a Thursday parade so public, and then promptly debunked A and B.

Which gives them a super shot at achieving C.

Which would have to rank as the greatest of their many resurrections.

"Because, you know, it's the best team we've played against with our backs against the wall," Chauncey Billups said.

The pressure has suddenly been volleyed back to the San Antonio Spurs to live up to Billups' assessment, after Detroit claimed a 95-86 team triumph in Game 6 that put the visitors on the short list of road teams to force a Game 7 in The Finals from 3-2 down.

As a result, we proceed to the next list of factoids and suppositions, which also contains plenty Detroit will love to hear.

Starting with the fact that Gregg Popovich, Tim Duncan and Manu Ginobili have never tasted a Game 7.

It's not so much a concern with Pop, or Manu the gold medalist, but you have to wonder where Duncan is psyche-wise after three more shaky fourth-quarter free throws. Duncan also endured a scoreless stretch of more than 10 minutes bridging the end of the third quarter and the start of the fourth, killing any notion of a liberated Duncan (21 points, 15 boards) going 40-and-20 wild after Robert Horry saved him in Game 5.

"That's one of those mental things you have to ask Tim about," Horry said when asked if the Spurs are starting to dread the sight of Duncan stepping to the line in crunch time.

If the experience factor has a big bearing in Thursday's decider, Big Shot Rob will have to be at his hugest. Bruce Bowen is the only other regular in the Spurs' rotation who knows what a Game 7 feels like. Bowen, mind you, has played bit-part minutes in one Game 7, compared to Horry's six.

Dare we say they won't be tight Thursday night, even on the road, no matter how unfriendly the SBC Center gets.

If Rasheed Wallace wasn't fazed by the gaffe he made Sunday, when he unforgivably left Horry alone at the 3-point line to trap Ginobili in the corner, he's not going to be jittery here. Wallace showed how much pressure affects him in Game 6 with a flurry of huge plays in the final period ... all while carrying five fouls.

A jumper from the baseline. A 3-pointer from deep, after two huge offensive rebounds by Tayshaun Prince. A put-back basket for a five-point lead, and then a clinching strip from Ginobili with 76 seconds to go.

"Even though I made a bonehead play the other night, I had to put it behind me," said 'Sheed, who went on to boast that "I don't feel pressure."

Hard to argue, on this evidence.

"I think, to a man, everybody felt terrible about the way he took that loss the last game," said Pistons coach Larry Brown. "That was the big, big thing in the game tonight. They care so much about him.

"I said last year when Joe [Dumars] made the trade to get him, he won us a championship. We were not ready to take that next step. And now he's giving us a chance, along with all those other guys, to go to Game 7 and try to win again."

It'll be the first Finals Game 7 since 1994, and fitting end to this scorching three-game series bestowed upon us after the Pistons and Spurs split four blowouts.

I picked the Spurs to win these Finals (in six) and I don't change predictions midstream. I'm still going with San Antonio.

Not that the Pistons are going to let me or you say so boldly.

Not when they're committing just five turnovers in an elimination game and sinking as many triples (eight) in 48 minutes as they had in the previous five games.

Not when there is still plenty of doomsday data out there to spark them one more time.

No team has been forced to play more playoff games in one year than Detroit, which will tie the 1994 Knicks at 25 once Game 7 tips off.

No team in playoff history has ever won two road Game 7s in the same postseason, as the Pistons must do to repeat as NBA champs.

No road team has won a Finals Game 7 since Washington at Seattle in 1978.

By Wednesday lunchtime, when the Pistons meet the media for the final off day of the season, bet on them being to able to recite all of the foreboding past.

"It's close," Ben Wallace said. "Definitely can taste it."

Told you. They love hearing that stuff.