EAST RUTHERFORD, N.J. -- He won't use the word redemption, won't let it near his lips, because Vince Carter is trying hard to distance himself from his Vin-Sanity past, trying to let the world see him as a good teammate, a winning ballplayer. He's in the most precarious of positions with these hellacious four months here, where every magnificent move for the New Jersey Nets can be thrown back into his face as an indictment of his days with the Toronto Raptors. 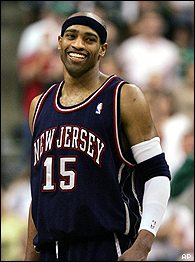 As badly as Carter wanted out of Toronto, it had to be stunning how badly they wanted him out of there. As he confessed, he had stopped playing hard. According to reports, he had tipped an opponent about a play the Raptors were going to run in the final moments of a game.

He can't turn back the clock, except to wish he hadn't been so honest with John Thompson on television. He's in a long line of athletes who's checked out with this team, but on a short list who did the unthinkable in this never-give-a-straight answer-culture. Carter copped to the charge and told the truth.

But as soon as Carter arrived in Jersey in late December, he started running the break with Jason Kidd, running far, far from those dark days with the Raptors. They're still with Carter, though. They still shadow him.

Armed with his own motivations to redeem his good name with the Nets, Carter had a secondary source to make sure he didn't regress back to his Raptors ways: Kidd. There was no time to lose on the chase for the playoffs, and there are few players in sports with the credibility and clout to hold teammates accountable the way Kidd does. He's the best teammate in the world for the inspired, forever rewarding extra effort with perfect passes for baskets. For a dog, he's your worst nightmare.

So Carter has had no choice but to play, and play at the highest of levels with the Nets. "It's hard to look him in the eye if you're not giving your best out there," Richard Jefferson said. "He elevates everyone around him."

After the All-Star break, Kidd sensed Carter had delivered one of his halfhearted Raptors performances and called him out without ever using his name to reporters. If the Nets had players interested in simply getting up shots, they should call it a season and start playing the young kids. The message was delivered, and Kidd never needed to say it again.

Together with Kidd and a bunch of spare parts, Carter led the Nets to victory in 15 of their final 19 regular-season games and they overtook the collapsing Cavaliers for the 8th spot in the Eastern Conference playoffs. They get Shaq, Dwyane and the Heat in the first round, but the strangest thing has happened: Because of Carter's renaissance, these Nets are the smallest underdog No. 8 seed the league has seen in a long time.

Now they're talking about him as they did in the old days: as a superstar. Carter smiles modestly, and insists his 34 points per game in the final weeks makes himself satisfied beyond nothing except giving himself a gym where he was welcome, an organization that would expunge his Raptors rap sheet.

"What was important was that I was able to come here and help Jersey say, 'That trade was worth it. I hope they're saying, 'Hey, this trade worked out.'"

Well, the Nets gave away only spare parts and draft picks for a franchise player. That's how bad it was in Toronto. That's what a nightmare he had become for the Raptors. Feel free to judge Carter now, because he's been spectacular. Now, Carter goes flying through air, trying to leap Shaq in these Eastern Conference playoffs, trying to jump even higher over the broken hearts and broken promises of performance that he left behind with the Raptors.