INDIANAPOLIS  Like many other athletes-turned-entrepreneurs, Stephen Jackson has a record label, legitimized by the iced-out, nearly waist-length chain his boy from back home rocked the other night. The label's name is Secret Society Entertainment.

But when it comes to discussing his background, Jackson is anything but secretive. And based on what the Indiana Pacers' fiery guard/forward said in an empty Conseco Fieldhouse locker room after his team's Game 4 loss to the Pistons, it's doubtful that he and his artists are having difficulty finding material for hard-core rap albums. Jackson's upbringing was wrought with explicit content. 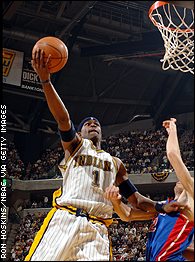 Port Arthur, Texas, that is. Jackson breaks it down like this: "50,000 people, eight sets of projects, two high schools. Everybody's doing the same thing."

Where he's from is why Jackson's temper on the court tends to bring out both the best and worst in him. It's why the Pacers' leading postseason scorer (17.4 points per game) plays like he  excuse the country grammar  ain't never scared.

Because that's precisely what Jackson is. Scared. Frightened of losing this, of "fading to black," of being another B.J. Tyler, the former University of Texas star who was gone from the NBA just as quickly as he got there. Tyler was from Galveston, Texas, not far from Port Arthur. "He got out, but he wasn't humble about it," Jackson says.

See, when you escape from what had Jackson and Tyler trapped, you do your damnedest to stay out. That's why Jackson has persevered through professional stops in Australia, the Dominican Republic, France and Venezuela, and with nine teams in the CBA and NBA before finding some stability four years ago with the Spurs (for two seasons).

For it was just 10 years ago that Jackson did his best to, as the rapper I-20 says, give new meaning to the word "childhood."

Point blank: Jackson was a hustler. You don't have to ask him about it. He'll tell you.

"I was out there bad, yo," the 27-year-old says, both disbelief and regret transparent in his voice.

He says he routinely skipped class as a high school sophomore and junior, preferring project hallways to those of Lincoln High. He says there were nights he didn't return home, that his single mother, Judy Jackson, had to go out searching for him. Stephen Jackson ignored a warning sign right in front him  his father, George Aldridge, just recently released after serving 10 years in prison for "robbery, drugs, all kinds of stuff," his son says.

"I'd be lying to you if I told you I didn't take that route. "Everybody's selling drugs and everybody's hanging out," says Jackson, who said his older brother, Donald Buckner, was beaten to death when Jackson was 15. About that time, until he left for prep powerhouse Oak Hill Academy in Virginia, where he would become a McDonald's All-American, Jackson found the allure of breaking the law too much to ignore, as Jay-Z once rhymed.

Jackson: "It was a fad. I damn sure wasn't thinking about getting no job. I thought that was the easy way out." He says he sold "a little bit of everything."

He keeps a red bandanna hanging outside his locker.

Bloods. When he wasn't running hoops, Jackson used to run with the local street gang. He says he represented the "3200 Block, Three-two-double-oh." On the inside of his left forearm, he has a tattoo of a man firing an automatic weapon. He makes it clear he doesn't "bang" anymore (he is, after all, a father of five), but he still represents his roots, only in a different fashion, emphasis on fashion. A shirt with a red collar, a red Pacers cap.

"I was just raised like that," he says. "All my friends. I don't trip on nobody with no blue rag, but at the same time, it's what I represent. It's what I've represented since I was 9 years old. All my friends in my neighborhood. It was just inherited. I ain't banging, though.

"I got in a couple of scruffs over it," he recalls. "It's nothing I'm embarrassed about. It just happened growing up. Walking outside, everybody got on red, I can't walk outside in blue."

Others recognized his athletic talent  and the opportunity it presented  even when he couldn't. Older cats would give him two or three bills and send him home, he says. "Everybody knew I played basketball," Jackson says. "Sometimes I got pulled over with [drugs], and they let me go because of who I was. If I was in Houston or L.A., that would have been the end of me.

"That's why I always go back to I'm blessed. A lot of people get in that and don't have nobody to tell them, 'This ain't right.' There's a lot of people in my neighborhood that's probably 10 times better than me, but they didn't have people telling them, 'Yo, you need to stop that [stuff]. You can do it. But it's on you.'

But it most certainly was Jackson we saw follow teammate Ron Artest into the stands at the Palace of Auburn Hills and engage in wild fisticuffs with fans, acting as though he'd been listening to hours of Lil Jon records.

One man's opinion drawn from limited exposure: Jackson is articulate, easygoing, smart and thoughtful. Charming even. Dude's cool. He often makes references to his deep religious faith. He doesn't come across as the thug he's perceived to be.

Then why'd he do it, you ask? He lives by a certain code of conduct, and on the night of Nov. 19, he wasn't about to compromise it. He was going to ride for Ron, Reggie  whoever was wearing a Pacers uniform.

"There's no way I would have went in the stands if my teammate wouldn't have went in there. I was raised that if I'm with you and we get in a fight, I'm going to help you. We're going down together. That's how it goes. These guys in here are like my family. If we go to Detroit, Toronto, if we're going together, we have to make sure we come back together."

Jackson's actions cost him 30 games. During the time off  on road trips, spent in hotel rooms watching his teammates battle without him  he gained valuable perspective. Jackson had been paid in full when the Pacers acquired him from Atlanta in exchange for Al Harrington last summer, to the tune of a reported $38 million over six years. He says he had begun to lose the humility and the hunger that saw him through a four-year basketball odyssey that began when a poor academic record prevented him from playing at Arizona.

"It opened my eyes," he says. "I was real relaxed coming here. I was like, 'I made it.' That let me know anything can happen.

"With [Artest] asking for time off to promote the album and all that stuff, he got ungrateful. And I'll be the first to say that. Anytime you want to take time off from a job that millions of brothers work so hard to get here, that's not being humble. I think God showed him, 'The same way you got this, I can take this from you.' You can't take nothing for granted, and I think that's what [Artest] did. He got too happy with where he was, and God wakes you up all the time.

"Being away from the game showed me that, 'Look, you can be a badass all you want, but you've got to obey the rules.' God chose me for a reason. My momma tells me that every day. I know there's a million people who want to be in my shoes."

Somewhat scary is the thought of where Indiana would be without Jackson and his versatility. He has had to fill a different role than was intended when he arrived. With Artest gone, an aging Reggie Miller providing inconsistent contributions in the playoffs and Jermaine O'Neal struggling with a shoulder injury, the Pacers are looking to Jackson as their primary scorer, though his tendency to freelance doesn't always sit well with teammates ("We've still got a lot to learn about each other"). He possesses Miller's mentality in that he won't hesitate to pull the trigger. A natural shooting guard at 6-8, defensively he's asked to guard small forwards: (Tayshaun Prince in this series, Paul Pierce in the last).

All good, though. Jackson's approach to basketball is not unlike the way he once lived his life: He's down for whatever if winning comes at the end.

"A lot of people get here, and they're in it for the wrong reasons," Jackson says. "They're in it to be famous, to be on TV. I want to win. I had a taste of a championship in San Antonio, and that was big for me. I cried when we won, and I hadn't cried in 10 years before that. It felt good, everything I'd been through, to say I was the champion at the end of the year.

"I want to feel that again."