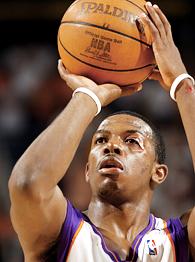 The starting guard, who has played in all 287 games since coming
to the Suns in his rookie season, will miss at least the next two
games of the team's Western Conference semifinal series against
Dallas and probably Game 5 in Phoenix as well, Suns president Bryan
Colangelo said.

"He underwent reconstructive surgery for an orbital fracture,"
Dr. Edward Joganic, who performed the operation, said in a
statement.

"Surgery went smoothly and he is expected to recover fully,"
Joganic said. "We will continue to evaluate Joe and assess his
ability to play in the remainder of the playoffs in one week."

Colangelo said the team wasn't going to be more specific about
how long Johnson could be out.

Johnson was injured when he was fouled by Jerry Stackhouse on a
drive to the basket late in the first half of the Suns' 108-106
loss in Game 2 on Wednesday night. The 6-foot-7 guard hung on the
rim briefly, then crashed face-first to the floor, and lay there
for several minutes while receiving six stitches to close a cut
near the eye.

Johnson climbed to his feet and made one of two free throws
before leaving the game.

Stackhouse was called for a flagrant foul, but the NBA rescinded
it Thursday after reviewing the play.

Teammate Steve Nash visited Johnson in the hospital after the
surgery. Johnson, who also sustained a mild concussion, had no
memory of the game, Nash said.

"He seemed pretty good this morning. He didn't seem too
depressed," Nash said. "His friends and his family were there.
His agent was there. He's doing OK. He had a lot of support so he's
fine."

Johnson has averaged 19 points a game in the playoffs,
third-highest on the team. He has shot 57 percent from 3-point
range (13-for-23), best of any player in the postseason.

"Joe's been an iron man for us," Nash said after the Suns
practiced Thursday before leaving for Dallas. "He never misses a
practice. He never misses a game. He's been such a huge part of our
team. He's had a great year, and he's a great guy. It's really
tough for us. We're just going to have to rally together and get it
done for him."

Jim Jackson will move into the starting lineup for Game 3 on
Friday night. Coach Mike D'Antoni said the team's biggest concern
is for Johnson.

"I think everybody really feels sorry for Joe," D'Antoni said.
"We're not down as a team. We know what we can still do, but for
probably the nicest guy around, to not be able to participate, we
feel sorry for Joe."