CLEVELAND -- One of LeBron James' favorite canned quotes is, "I don't believe in pressure," which has a way of short-circuiting the media sessions he often finds more tiring than a 48-minute game.

Yet there's no doubt James almost never lets pressure really get him down, even when he's facing uncharted conditions. As long-term observers know, he should not be underestimated in these situations.

From an eyewitness, here's a look at his five most meaningful debuts and his dazzling performances in each. 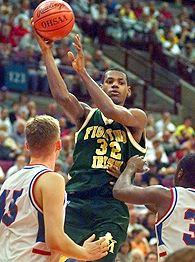 Before the game, Keith Dambrot is nervous. The Akron St. Vincent-St. Mary High coach knows he has a talented group of freshmen, including the best 14-year-old he's ever seen. All his instincts tell him you don't start a freshman in the first game of the season. But Dambrot has known James for more than a year and has waited, with excitement, for this night to showcase him.

James is a lanky 6-foot-3, with a face that doesn't need shaving, slightly defined arms and big feet that suggest he's got more growing to do. Yet he's far from awkward, just baby-faced and fluid.

At this moment, he is unknown in Akron but not in the basketball world, where word of his potential has gotten out. The proof comes 10 rows above the Fighting Irish bench, where University of Cincinnati head coach Bob Huggins is sitting. The Bearcats are in Cleveland for a game and Huggins has come to see what the buzz is about.

James starts at forward against the Cuyahoga Falls Black Tigers, a small but experienced team that runs a slowdown, motion offense. James powers through the defense, scoring 15 effortless points on flowing layups and dunks with eight rebounds, both totals leading the team. The Irish win in a rout.

"Listen to what I'm telling you: He has a chance to be the best player I've ever seen," Dambrot, now the University of Akron head coach, said afterward to the only reporter to cover the game.

The reporter tells his editors that James and the Irish may be a team to watch. They win the next 26 games and the state championship. 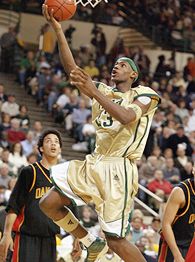 Basketball fans have seen the national magazine covers, brief highlights from hand-held news cameras and mountains of hype. But most have yet to actually see James play. In an unprecedented move, ESPN2 decides to put LeBron on live in primetime against the nation's No. 1-ranked prep team, Oak Hill Academy of Mouth of Wilson, Va.

Though it's only the third game of the season, the stakes are outrageous for James, whether he knows it or not. Many are predicting he'll fail and they want to be underwhelmed. With the huge audience, a poor performance would no doubt injure his reputation. It would also likely cost him money in the fast-approaching endorsement negotiations.

Dick Vitale and Bill Walton lead the broadcast team, James is the lead story on "SportsCenter" and "Pardon the Interruption" several hours before the game, and numerous newspaper and magazine reporters have flown in to document the coming-out party or the fall from grace.

With nearly 12,000 in attendance at the Cleveland State Convocation Center, James' every move is watched with fascination. Now 6-7 and a more-defined 230 pounds, he's just as loose and focused as that night three years earlier. He fills the airwaves with dunks, no-look passes and jumpers that become regular highlights for months to come.

He finishes with 31 points, 13 rebounds and six assists as the Irish win by 20. Afterward he shrugs at the spectacle and personally thanks Vitale and Walton for coming to do the game. The next day, ESPN announces a 1.97 rating, equivalent to about 1.67 million homes for the game. Shoe company officials start thinking about adding zeroes.

It feels like a late-round playoff game at Arco Arena, where 300-plus media members have gathered. The Sacramento Kings owners, Gavin and Joe Maloof, hold a pregame press conference and thank the NBA for giving them this golden chance to host the game.

James' first Nike commercial, depicting the pressure of his first NBA game and filmed at Arco a month earlier, is running 'round the clock on TNT and ESPN. Talk shows and columnists are running amok. Some 45 minutes before the game, hundreds of fans press up to the court, straining to watch James warm up.

Another sellout crowd is rattling the building, but TNT's early game goes into overtime, so everyone waits. James plops his 6-8, 240-pound frame on the scorer's table and waits for the whistle to call him to the opening tip. A cameraman is a foot from him, shooting from a low angle and focusing on his face. LeBron is biting his nails.

In the next 12 minutes, the Kings play beautiful basketball, executing the Princeton offense with seamless precision as they take a giant early lead. The home fans barely notice and neither does James, who shows he can score in bunches like a seasoned vet. He scores 12 of his 25 points in the first quarter and puts up enough highlights to fill the "SportsCenter" Top 10.

Late in the period, he makes steals on three of four Kings possessions. With one, he races to the other end and throws the ball down with vigor; the right-handed soaring jam in the Cavs' new wine-color jersey is still one of the most recognizable shots of him. The other two he passes off to teammates for dunks, including one when he turns and waits for teammate Ricky Davis, bends and shovels it to him for an alley-oop. He is selfless, spontaneous and spectacular in a single moment.

The Cavs come back and briefly take the lead in the fourth quarter before losing by 14 points. Along with his 25 points, James posts nine assists, six rebounds and four steals. It is one of 15 losses in the Cavs' first 19 games.

Kings coach Rick Adelman ends his press conference after three questions, noticing there is little interest in anything he has to say unless it is about James. The media race to the Cavs' locker room, where a ring of microphones and cameras illuminate James in a cramped hallway. He is saying he doesn't believe in pressure. 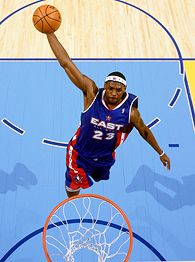 Angry about being what he considered an All-Star snub as a rookie, James couldn't be more eager to play in his first at the Pepsi Center. The only problem is he's exhausted and under the weather. He and the Cavs played a back-to-back leading into the All-Star break and he's too sick to address the media. Yet he's in uniform for a third straight night and scores 20 points to help the sophomores win the Rookie Challenge.

An hour before Sunday night's main event, he's munching on a giant turkey sandwich in the Eastern Conference locker room and casually answering questions. Blowing his nose in between bites, he tells the packed-in media that he's just looking to have fun and entertain the fans. A short time later, when he's introduced as a starter he extends his hands and makes a triangle, a symbol for "dynasty" made popular by friend and hip-hop star Jay-Z. One hundred feet away at his courtside seat, Jay-Z smiles and thrusts his fist into the air.

LeBron scores 13 points, with eight rebounds and six assists, in the East's victory. His signature highlight of the evening is a thunderous breakaway dunk. Late in the game he frequently yields to teammates Allen Iverson, who wins the MVP, and Dwyane Wade.

Afterward, when asked why he was deferential, he says, "My time in these games will come." Some 366 days later he becomes the youngest All-Star Game MVP ever. 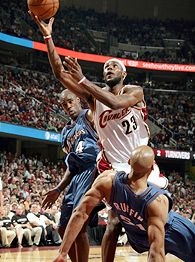 James is sniffling again -- his sinuses are acting up before another big game.

But it is not the only reason his eyes have been watering for a couple days. The night before his first-ever playoff game and the Cavs' first in eight years, he attended the wake of Brenda Lewis-Weems, a woman who served as his second mother in his youth. Brenda had just succumbed after a battle with cancer. He grew up playing basketball in her backyard with her son, close friend Brandon, and traveling to summer tournaments with her family. On this day, he'll pay tribute to her by scribbling her name and "R.I.P." across the tongue of his left signature Nike.

It is late in the first quarter and the Wizards are neck-and-neck with his Cavs. The towel-waving sellout crowd is pulsating. The ABC national broadcast team is waiting to see how James deals with another situation he's supposed to not know how to handle. With the game tied, James pulls up for a 3-pointer to put the Cavs ahead. At the other end, he pulls down a rebound and outruns everyone else to the other end for a layup and a foul.

In a flurry he scores nine straight points and dishes to teammate Donyell Marshall for a 3-pointer -- a 12-0 run to close his first-ever playoff quarter. The public address announcer is screeching "I'm a witness," corresponding with Nike's latest ad campaign for James and the thousands of T-shirts the Cavs have given out. The crowd doesn't have to be prompted, frequently breaking into "M-V-P!" chants.

During a timeout late in the game, James darts an eye over to the scorer's table and media relations staffer Amanda Mercado, who holds up two fingers. Two rebounds from a triple-double -- he knew he was close. In the final three minutes he corrals three, making more debut history. He's the first to register a triple-double in his first playoff game since since Magic Johnson in 1980. LeBron's totals: 32 points, 11 rebounds, 11 assists.

Afterward he tells the media he doesn't care about stats or individual achievements and doesn't feel pressure. Then he showers, slips on a nicely tailored suit and joins his family, friends and infant son out on the floor of the empty area. They are proud but not the least bit surprised. They had seen all this before.

Brian Windhorst covers the Cleveland Cavaliers for the Akron Beacon-Journal.