PHOENIX -- It's probably the only certainty going into the first Game 7 of these playoffs.

Don't look for Kobe Bryant and Raja Bell to shake hands when it's over.

No matter what happens.

Bryant and Bell weren't tapping fists at the center circle or acknowledging each other in any way before games even before Bell clotheslined Bryant late in Game 5 of this epic Lakers-Suns series. Now their final encounter in a season of animosity also happens to be the game that will break this 3-3 deadlock between the Los Angeles Lakers and Phoenix Suns and decide whether Kobe or the Kobe Chopper advances to Round 2.

The following timeline traces how Bell joined San Antonio's Bruce Bowen, Seattle's Ray Allen and Ruben Patterson -- the self-proclaimed "Kobe Stopper" -- on the list of swingmen most likely to get tangled with No. 8.

June 2001: These two were matched against each other for the first time, believe it or not, in a playoff series with much bigger stakes than even Saturday's Game 7. Bell was assigned to track Bryant for long stretches of the 2001 NBA Finals.

Bell was an 11th-hour addition to the 76ers' roster that season, recommended to Larry Brown by San Antonio after going to training camp with the Spurs. As the story goes, Bell was in the CBA and eating at a Denny's in South Dakota (Sioux Falls, to be exact) when he got word in mid-April that Philadelphia wanted him on a 10-day contract.

He wound up progressing so quickly that, by the time the Finals began, Bell had guarded Ray Allen extensively in the Eastern Conference finals and found himself as a key member of the platoon Philly sent at Kobe. In Game 1, Philly's only victory, Bell helped limited Bryant to 15 points on 7-for-22 shooting.

In April, reflecting on that experience to the East Valley Tribune, Bell said, "At that point, the only way I was going to play in the playoffs was to get out there and get in somebody's [face]. He was my job. I think people blew it out of proportion because it wasn't personal for me, and I don't think I was on his radar."

The years in between: Bell gradually blipped onto Bryant's radar more frequently during the four seasons before he signed with the Suns.

In the 2002-03 season, Bell and Suns teammate Steve Nash were teammates in Dallas, where Bell was part of a duo (along with Adrian Griffin) that Don Nelson liked to throw at Kobe, trying to keep bodies and coverages fresh.

Then Bell joined the Utah Jazz before the 2003-04 season and became a rotation regular for the first time in his career, which earned him more frequent Bryant assignments. Bell has complained throughout this series about how "I continually get hit in my face" by Bryant elbows and says it actually started last season with a pointed 'bow in a Lakers-Jazz game.

This season: This is the season that this battle really got good.

When the teams met in November, Bell came away with a bloody lip.

Two of Bryant's 14 technical fouls during the regular season were assessed after shoving matches with Bell.

Bryant torched Bell for 51 points on April 7 at U.S. Airways Center but the Suns won again, improving to 3-0 in the season series.

It was after that game that Bryant provided a preview of the verbal sparring that is now expected between these two, saying, "I've got bigger fish to fry than Raja Bell. Are you kidding me?" 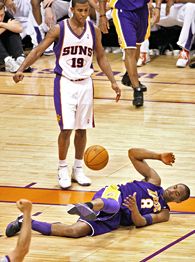 Bell and Nash didn't play in the teams' final regular-season meeting April 16, which didn't make Bryant any happier. The Lakers viewed that as a sign that Phoenix wanted L.A. to win . . . and thereby help the Lakers hold off Sacramento for the West's No. 7 seed. Bryant, as you can imagine, didn't appreciate the perception that the Suns preferred to face the Lakers instead of the Kings in the first round.

This series: The Lakers believe Bell -- dubbed "a shadower" by coach Phil Jackson -- flops and invites elbows to the face by leaning in on Bryant almost like a batter trying to get hit by a pitch. Bell says elbows to the face are a Kobe go-to move and that referees enforce no "boundaries or limitations to what he can do to me."

That led to Bell's takedown of Bryant late in Game 5. Early in the fourth quarter, after Bell took a shot to the jaw, Lakers coach Phil Jackson heard Bell complaining to a referee and, according to Bell, said: "You [expletive] deserved it." Jackson, for the record, denies using an expletive. Bell, meanwhile, couldn't deny that Jackson's comment was the last jab that sent him over the edge.

"At that point," Bell said Wednesday before his one-game suspension was announced, "I kind of lost my cool and I took it into my own hands."

The aftermath: Surely by now you've heard what was said between Game 5 and Game 6.

First Bell blasted Bryant as a "pompous, arrogant individual" who gets preferential treatment from the refs.

Then Bryant retorted with a memorable soliloquy in which he dismissed Bell, two years older than Bryant at 29, as some "kid."

What's next? No matter how justified Bell felt in clotheslining Bryant, it was an indefensible move. Exacting such blatant retaliation, above the shoulders, guaranteed that he would be suspended for Game 6, with the Suns facing elimination on the road and already shorthanded without injured big men Amare Stoudemire and Kurt Thomas. You could even make the case that Bell, if you compare what he did to the hits that earned one-game suspensions for Sacramento's Ron Artest and Miami's James Posey earlier in the playoffs, deserved more than a one-game suspension.

Which is why Bell has since apologized to his teammates for "my lack of judgment."

Now, though, Bell is in a great spot. After losing his head, and watching from a Beverly Hills restaurant as the Suns tried to save their season without him -- as he was accompanied by an NBA security guard for protection -- Bell was bailed out. Phoenix forced a Game 7 anyway to give their Kobe Chopper a shot at redemption.