As we move into final four mode, we wanted a fresh take on the craziest playoffs in memory.

So we asked our writers these four questions:

1. Who's been the best player?
2. What's up with the Spurs and Pistons?
3. What if Mark Cuban wins an NBA title?
4. What will happen the next four weeks?

Here's what they said:

1. Who has been the best player in the playoffs?

Chris Broussard, ESPN Mag: LeBron James was the best player of the first two rounds because, in his first ever postseason, he lifted his mediocre supporting cast to heights no one could've predicted. Also had two game-winners and two triple-doubles. 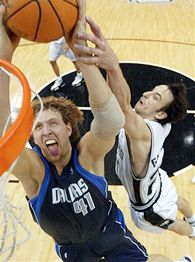 Ric Bucher, ESPN Mag: Dirk Nowitzki. Whatever his team has needed, he's provided. His performance in Game 7 versus the Spurs alone might earn him this acknowledgement, considering the uncharacteristic aggression he demonstrated and the enormity of the victory. Runner-up, Dwyane Wade.

Scoop Jackson, Page 2: Elton Brand and Tim Duncan. EB balled at a Dream versus DR50 level (circa 1995) for two series and Duncan damn near beat Dallas by himself playing outta position.

Dan Shanoff, Page 2: Dwyane Wade. While all the other "big" stars of the playoffs (Kobe, LeBron, Nash) have fizzled or underperformed at times, Wade has consistently (and quietly) made an argument he's better than any of them. See Game 1's efficient 25 points in a foul-limited 27 minutes.

Chris Sheridan, ESPN Insider: Right now I'm going to say Dirk Nowitzki, because of the way he led his team past the defending champs. I said in my chat last week that I thought his overall game was now better than Kevin Garnett's, generating quite a few "Are you crazy" e-mails. But I stand by what I said about the Mavs' "uberstar."

Marc Stein, ESPN.com: Dirk Werner Nowitzki. No one player in these playoffs has a longer to-do list than the Mavs' man. Nowitzki isn't just far and away Dallas' primary scoring option; he also has to be the Mavs' best rebounder and playmaker and supply a good bit of their swagger every night. LeBron James had as much to do for the Cavs, of course, but Dirk's still playing and got the Mavs past an obstacle that had impeded them all century. So I'd say Dwyane Wade is the only guy left out there who can bump Nowitzki here.

2. A year ago, the Spurs and Pistons seemed to be coming together for a sort of combo dynasty in which they would swap several more titles. Was it all an illusion? Are they done?

Broussard: It was no illusion at the time, but the emergence of other characters in the league changed it. Who foresaw LeBron coming of age so quickly, and who foresaw Avery Johnson impacting Dallas so much? The Pistons and Spurs are not done. Both, especially the Spurs, will be legit contenders for a few more years to come. 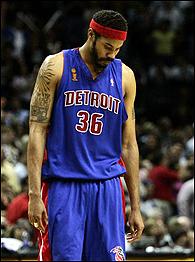 Bucher: I never thought that rivalry would last a few more years. Both teams need to re-load. The Pistons have been riding the same horses for too long and the Spurs have been relying on older pieces -- Robert Horry, in particular -- to play vital roles. The clock has struck midnight. Both still have some valuable pieces and should be contenders, but they certainly haven't cornered the market.

Jackson: No, I think we (media) were delusional for thinking that other teams weren't going to get better. I'm not sure they'll face each other again, but one of them will at least be in the Finals or the conference finals for the next three years.

Shanoff: What remains consistent from the previous history (of all of a month ago) to the revisionist history (of this morning) is that in this new era, winning a title demands a team-first concept. The single-star-led team (Kobe's Lakers, LeBron's Cavs) will never break through until it gets a more consistent total team effort. Even the biggest stars of the remaining teams (Dirk, Dwyane) are getting particularly consistent outstanding efforts from their teammates. The Spurs and Pistons will continue to be in the title mix over the next 3-4 years; they've simply been joined by some new competition.

Sheridan: I'm real down on the Pistons after their Games 3-6 results against the Cavs, and the Spurs came awful close. They're not going anywhere anytime soon. They'll keep competing for titles for the next three years, but Detroit's window seems like it might close sooner. Watch out for the Bulls and Cavs next season in the East, and look for the Spurs to go after a Josh Howard-type of their own this summer.

Stein: They're not done by any means. Both teams, at the moment, still have the only championship-tested cores on the NBA map. The problem? In this new NBA, with the pace of the game seemingly speeding up every day in Year 2 of the new rules, athleticism and quickness and depth are just as important as a franchise player or two. The Spurs and Pistons don't have any of those commodities in abundance once you look past the quality of their starting fives. But if it's me, I'd rather start with the hard-to-get stars and then try to add on the other stuff, which you can find at reasonable prices if you've got a good management team. If you want to believe San Antonio and Detroit are done, go ahead. That means betting against two of the best front offices in professional sports, so I'll pass.

3. True or false: It would be a good thing if Mark Cuban were to win an NBA title.

Broussard: True. Mark Cuban is a terrific owner. He's done everything possible to better his team and franchise, and he carries himself like your average fan. This is clearly not just an investment to him, but a passion. 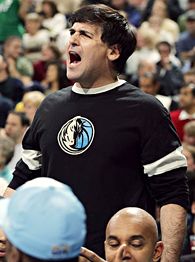 Bucher: False, if other owners see self-promotion and complaining, loud and long, about every last aspect of NBA operations as the secret to winning a ring. True, if they see thinking out of the box and being passionate about a team's success as the key ingredients.

Jackson: Yes. Because we all need a little "opposite of George Steinbrenner" in our lives.

Shanoff: True. He's the best owner in sports. If his brand of fan-centric (and eccentric) ownership was rewarded with a championship, maybe more owners would act more like him.

Sheridan: True. Why wouldn't it be? The guy may wear thin on some people, but he cares about his product and his reputation, he isn't afraid to offer his opinion, and if more owners were as hands-on as he has been there would be a lot more buzz about the NBA among casual fans and non-fans than there is right now. The league needs to broaden its fan base.

Stein: True. Dallas and Cuban winning the championship would, once and for all, hush conspiracy theorists forever. It would have to, right? Who could ever again accuse the NBA of rigging anything if David Stern allowed the scourge of the league office -- his Lex Luthor -- to take possession of the Lawrence O'Brien Trophy? (Wait ... who am I kidding? This is the NBA. The blasted conspiracy theorists are never going away, are they? We resume our original programming: Every game my team loses is the refs' or Stern's fault.)

4. Jump ahead two weeks. Tell me what is going to happen in the NBA Finals, based on what we've just seen in the conference finals.

Broussard: I've been picking Detroit all season, so I hate to flip-flop, but I'm feeling like we'll be watching Miami and Dallas in the Finals. That said, start fitting Shaq for his fourth ring. Dallas will not be a pushover, though. The Mavs will run their big bodies at Shaq and Josh Howard can do a decent job on Dwyane Wade. Also, the Heat have no one to guard Dirk Nowitzki. Still, the Heat will find a way, and Pat Riley will find justification for all his roster (and coaching) moves. 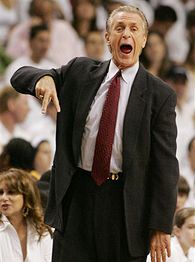 Bucher: The Mavericks, their depth and versatility outlasting the Suns just as it did the Spurs, knock off the Pistons, who have limped into the finals after yet another furious struggle to get past the Miami Heat. Dirk Nowitzki becomes the first foreign-born, foreign-developed player to be named Finals MVP.

Jackson: It's the Double D series. Where's Pamela Anderson when we need her? Detroit vs. Dallas, the H.T.I.C. vs. the N.K.O.T.B. A mission versus a vision. Before the season Flip Saunders put this team on a mission to get back what it had two years ago; Avery Johnson said before the playoffs that he had a vision of where his team was headed.

It's going to come down to will: Who's will is going to be imposed and who will decide that this title is meant to be theirs. The Mavs have never tasted this before, the Pistons had the taste taken out of their mouths last year. They've played the game all season long hungrier than any team in the league, like they needed that taste back to survive. Now back in the Finals, the steak is on the table. The Pistons can already taste it.

Shanoff: It's Mark Cuban's world and we're all living in it. After having first alienated fans in San Antonio, then fans in Phoenix ("Desert Slugs"), the Mavs owner has turned his attention to inciting the fans of Miami as part of Dallas' proven "Insult You Off the Floor, Then Injure You On It" strategy that has the Mavs widely considered the favorite to win the Finals. The first line of his latest blog entry: "Shaq's a fatty. Dwyane Wade is no Josh Howard. And I challenge Pat Riley: When he loses to my Mavs in the Finals, he has to wear his hair like mine."

Sheridan: I expect we'll be seeing Phoenix and Miami in the finals. The Suns because it seems they're living a charmed postseason despite their fatigue and injuries (like the Sixers in 2001); the Heat because they're finally meshing after adding so many new faces. So two weeks from now I imagine we'll be talking about dusting off Brian Grant to play defense against Shaq, Dwyane Wade's slashing game versus Steve Nash's passing game and Raja Bell's chances of breaking Michael Jordan's finals record of six 3-pointers in one half.

Stein: West will be best. That's what I see in my (not-so-trusty) crystal roundball. Finally toppling San Antonio, combined with Detroit's increasing vulnerabilities, made Dallas my new favorites to win it all. If the Suns' team of four small forwards and three guards -- and maybe some Kurt Thomas -- can beat the Mavs after they've been dragged through seven-game marathons by the L.A. teams, Phoenix deserves to inherit the "favorites" tag. No matter how weary the Suns would be by then. The sad reality for Pat Riley, as hot as his Heat are starting to look, is that Dallas and Phoenix are the teams they match up worst with. I'll be first in line for the crow-feeding if the Heat can indeed dump Detroit, but that doesn't change my view that the West winner is headed for a parade.