CLEVELAND -- One of the reasons Dan Gilbert was able to buy the Cleveland Cavaliers is because once upon a time, he was an extremely talented pizza deliveryman.

So good was Gilbert at the pizza delivery profession that he was able to save $5,000, money he eventually used to rent a small office so he'd have a place to hang his real-estate license and greet the mortgage lenders who were constantly dropping by and asking Gilbert to steer home buyers to them. 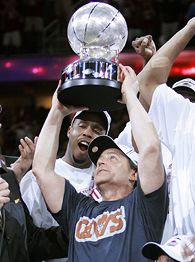 It didn't take long for Gilbert to figure out that the mortgage side of the real-estate business was more financially promising, and with no license requirements in Michigan at the time, he decided to give it a whirl -- a decision that was the genesis of a company that eventually became Quicken Loans, the nation's largest online provider of home mortgage loans.

Gilbert, 44, has a personal net worth of $1.1 billion, ranking him 354th on Forbes Magazine's list of the 400 richest Americans.

He purchased the Cavaliers from Gordon Gund for $375 million in March 2005, and in the ensuing two-plus years the Cavs have grown into one of the highest revenue-per-capita franchises in the NBA.

Gilbert has applied several of his business philosophies -- his "isms," as they're known -- to the running of the Cavaliers, an approach described in the Cavs' media guide as "a unique, anti-bureaucratic, common-sense, people powering approach that is the foundation for the rejuvenation of the franchise and arena."

In a nearly half-hour sit-down with ESPN.com at the AT&T Center in San Antonio on Thursday night prior to Game 1 of the NBA Finals, Gilbert cited one example of how he implemented his corporate commonsense approach with the Cavs.

A day or two after completing his purchase of the team, he picked up a phone in the Cavs' offices and tried to make a long-distance call but instead heard two beeps and a prompt to enter an access code.

Why, he asked, did the Cavs make it so cumbersome to perform such a simple task?

It was explained to him that the access codes allowed management to monitor employees' calls.

"And you actually pay someone to go through all that data?" Gilbert asked.

To a guy who often says "a penny saved is still just a penny," the policy reeked of stupidity and mistrust, and Gilbert quickly gave everyone in the organization phone freedom.

Recently, he said he was shocked to learn that security guards were checking employees' and journalists' bags as they left the arena on game nights.

"What are we worried about? That they're going to take home three extra hot dogs? It was ridiculous," Gilbert said. "If you have the right business philosophy, there's no way something like that should happen."

The son of a World War II veteran who owned and operated a bar on Woodward Street and Seven Mile Road in the Detroit suburb of Southfield, Gilbert attended Michigan State as an undergraduate and was arrested for running what police said was a gambling ring. Gilbert says it was just a loosely organized season-long pool involving relatively small NFL bets. He was busted by a Michigan State Police undercover officer who had been tipped off by the father of one of the students who wasn't doing so well in the pool. The charges were eventually dropped and the case expunged from the records after Gilbert was brought before a magistrate and placed on probation.

Initially reluctant to discuss it, Gilbert did acknowledge that the trauma of the experience helped shape a critical juncture of his life. He delivered pizzas and did a six-month stint as a television reporter for a station in Kalamazoo before dumping his savings into what became his mortgage business.

"My last semester at college, I only had classes from 8 to 10, then I'd deliver pizzas to office buildings from 11 till 2, and then I'd go take a nap with 150 bucks in my pocket," Gilbert said.

"But it wasn't about money for me, I wanted to build. Build businesses, houses, create stuff. For me, and I think this is a secret for a lot of people, if you want to get wealthy you can't chase money to get wealthy. If you build something, the money will follow you. That's what happens."

Gilbert put in an unsuccessful bid to buy the Milwaukee Brewers from Bud Selig before purchasing the Cavs and plunging headfirst into his first major blunder -- the firing of coach Paul Silas just six games into his ownership reign with 18 games left in the 2002-03 season.

Gilbert explained, "We were in a battle for a playoff spot, and there was such an outright dysfunction going on between the coaching staff and the players, and the front office was not even talking to the coaching staff. We just thought, look, this is crazy, we thought it was the best chance we had to make the playoffs."

But the Cavs lost 10 of their 18 games under interim coach Brendan Malone and missed the playoffs, and Gilbert was lambasted in the local media.

"It was a 'young punk coming in here' thing," Gilbert recalled.

"What'd I learn from it? We probably should have waited. After talking to everybody involved, it was still the right thing to do, but you don't calculate the kind of media bashing you might take, you just don't think that way. Now I would think that way, because I understand it. But then I didn't."

The firings of Silas and general manager Jim Paxson cleared room for Gilbert to import general manager Danny Ferry (from San Antonio) and head coach Mike Brown (from the Spurs by way of Indiana). With LeBron James on board, the team has made major strides each season under Gilbert's ownership on the way to becoming this year's Eastern Conference representative in the Finals.

"To take something and hopefully deliver a championship, to do that, I would love that opportunity," Gilbert said "We really never put a time frame on it., but to see it now, where there are people here who worked for the Cavs for 10 or 15 years, and to look at their faces now. Wow."

A glow lit up Gilbert's face as he said that sentence, a prideful look matched only by his expression when he talked about that night long ago when the stars in the pizza delivery world were perfectly aligned and 78 hungry customers doled out tips that became part of the $5,000 nest egg that grew to $1.1 billion.

"Keep in mind, all forces had to converge at the same time for a number such as this to be achieved," Gilbert wrote Saturday in an e-mail response to a follow-up question. "Perfect low humidity, crystal clear night. Light traffic. Good luck on the green (and yellow) light timing. Lots of deliveries came in 'clusters' of close by houses at roughly the same time. And for some reason almost everybody had their money ready, which is rare. (It's very frustrating for a Pizza Guy to wait at your door for several precious minutes when he knows he has other deliveries in his car and that food is getting cold while you go and look for your money when you had a good 45-60 minutes to do that before he rang your doorbell!)"

So keep that in mind next time you order something with extra cheese and pepperoni.

And keep Gilbert's story in mind, too, the next time a pizza is delivered to your door. You never know what that delivery guy might be doing in 25 years. He might just be the next billionaire with a team in the NBA Finals.