Yes, Tony Parker is an NBA All-Star and Manu Ginobili is one of the league's best sixth men. But if the Spurs expect to get past the first round against the pesky Denver Nuggets, Duncan has to make it happen. 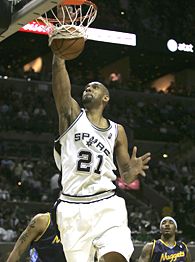 After a weak performance in a Game 1 loss to Denver, it was Duncan who not only scored big and made the biggest shot, but also positively influenced the rest of the Spurs' game in a 97-88 must-win Game 2 victory Wednesday night at AT&T Center.

"Good players come back after games that are not their best," Spurs coach Gregg Popovich said. "Timmy had a good night in a lot of different ways."

The Nuggets entered this series confident in ability of forward-center Nene to guard Duncan 1-on-1, with Defensive Player of the Year front-runner Marcus Camby providing a second line of defense.

But when Duncan is hot, he not only scores buckets, but he also opens driving lanes for Parker and Ginobili, develops open 3-pointers for Bruce Bowen and Robert Horry and contributes in other ways.

The Duncan trickle-down theory proved true in Game 1 as Duncan scored only 14 points while missing 10-of 17 shots, took only two free throws and had five turnovers during a 95-89 defeat. Parker also missed 12-of-20 shots en route to 19 points in Game 1, while Ginobili missed 11-of-15 shots for nine points.

In hopes of getting his dominating game back Wednesday, the 6-foot-11, 260-pounder watched lots of film from Game 1. And it worked.

And with Duncan hot, Parker had 20 points and six assists, and Ginobili had 17 points.

"With Tim it can just be about his presence. If he's not here, I'm not getting open jump shots and Manu and Tony aren't getting open lanes to the basket," Bowen said.

Said Ginobili: "I knew before the game [Duncan, Parker and I] were not gonna play like Game 1. We can accept for one us to play bad or even two to play so-so because usually one of the three is going to play really well. In Game 1, none of us three did. So we knew it was going to be a much better game for us."

C'mon, Manu, you got to give Duncan more of the credit. Don't get me wrong, the Nuggets definitely respect Parker and Ginobili. But the only Spur that Denver is really scared of is Duncan. Ginobili and Parker don't affect Duncan's game. But Duncan affects Parker's, Ginobili's and everyone else's in silver and black.

The modest Duncan, however, won't pat himself on the back publicly. "I didn't change much about my game tonight," Duncan said. "I liked the shots I was taking during the last game and tonight, a lot of the same stuff happened for me."

The Spurs' hopes of defeating the Nuggets or any other postseason foe depend on successful application of the trickle-down theory. And the Nuggets recognize what they're up against.

"Tim Duncan is a Hall of Fame player," Nuggets guard Allen Iverson said. "You can't stop a guy like Tim. The most you can do is contain him."

Marc J. Spears covers the Denver Nuggets and the NBA for The Denver Post.