CLEVELAND -- On the night Tim Duncan clinched what he immediately proclaimed to be "the best" of his four championships, Duncan also said he played "sub-par" and received only one vote for NBA Finals MVP from a panel of 10. 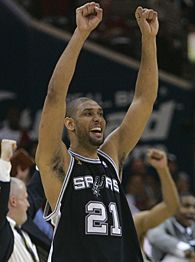 You couldn't exactly call it a bad Thursday night when General Mills representatives greeted the final buzzer by passing out a new Wheaties box that pictures Duncan lining up a bank shot  and when championship No. 4 cements Duncan as the franchise player of his generation.

There seems to be widespread reservation about referring to the Spurs in dynastic terms, especially from the Spurs themselves, but there is no hesitation here on this claim: Duncan is the NBA's best player since Michael Jordan.

At one early stage of these playoffs, Duncan joked about turning 31 two months ago. "I am old," he said. "I've accepted it." Yet he's three years younger than Shaquille O'Neal was last June when Shaq won his fourth ring and has played five fewer seasons than Shaq's 15.

Put another way: No. 21 is such a winner, such a difference-maker even when he's struggling, that David Robinson is now referring to the Spurs' run as "this Tim Duncan era," as if Robinson never had much to do with it.

"The only constant is Tim," Spurs forward Robert Horry said, naturally crediting Duncan for leading the way to the last two of Horry's seven rings.

With an 83-82 escape that broomed away LeBron James' Cleveland Cavaliers and completed its first-ever Finals sweep, San Antonio joins an elite group of teams in NBA history that have won four titles in less than a decade, slotting in alongside the 1990s Chicago Bulls (six titles in eight seasons), the 1980s Los Angeles Lakers (five titles and three more trips to the Finals in that decade), the old Boston Celtics (nine championships in the '60s and 11 in 13 seasons from 1957-69) and the original Lakers in Minneapolis (five in six seasons from 1949-54). The Spurs are thus one of only four franchises since the NBA's inception in 1947 to win a championship four times, leaving them behind only the Celtics (16), Lakers (14) and Bulls (six).

Yet it's the modern-day title maven, Horry, who's the first to say that you can't automatically bestow dynasty status on the Spurs, in spite of the four championships in a nine-year span and their every-year status as top contenders.

"The Lakers had one team," Horry said, referring to the mini-dynasty of three consecutive championships from 2000 to 2002 that was presided over by O'Neal and Kobe Bryant.

In San Antonio? "It's been two teams," Horry said.

One with Robinson for the first two titles, in other words, and one without Admiral Dave for the last two.

But doesn't that only enhance Duncan's individual legacy? He doesn't have a three-peat or even a repeat on his résumé, but he has kept his small-market franchise in the NBA's elite all this time no matter who was placed around him. He's never been paired with a Kobe or a Dwyane Wade, either, but it's largely Duncan who a) has never let the Spurs fade and b) and who makes them a title favorite for the foreseeable future.

"Tim is the common denominator," insists Gregg Popovich, San Antonio's Hall of Fame-bound coach. "He's [had] a different cast around him [in] '99, '03 and '05. He's welcomed them all. He's found a way to help them all fit, feel comfortable in their roles, and not many players can do that. But he is that easy to play with, and his skills are so fundamentally sound that other people can fit in [easier], and I think that's the key to the whole thing."

You can try to diminish Duncan's stature by lampooning the quality of the Eastern Conference victims they've repeatedly schooled, as Phil Jackson did when he claimed that San Antonio's first title -- in a cruise over the Patrick Ewing-less Knicks to cap the lockout-shortened 1999 season -- deserved an asterisk. There have been plenty of asterisk cracks during this postseason, too, even before the Spurs wound up matched against the novices from Cleveland.

You can make the argument that, for all of their impressive triumphs in the unforgiving West, our most unforgettable playoff memories involving the Spurs were usually against them: Derek Fisher's buzzer-beater in 2004 or Ginobili's series-turning foul on Dirk Nowitzki in Game 7 against Dallas last season.

You can recite the most recent claim that they wouldn't have even reached these Finals if not for the league-issued suspensions of Amare Stoudemire and Boris Diaw, just as Phoenix had seemingly seized control of their second-round showdown, or how the overmatched Cavs weren't even whole because of Larry Hughes' injury.

You can even extend the lucky argument with the reminder that Shaq, Kobe and the Zenmeister couldn't co-exist consistently enough to keep their championship triangle together for more than five seasons, disintegrating a monster that made Popovich feel at the time as though "the Soviet Union just disbanded."

Yet none of the above seems to dissuade the foremost basketball experts, who are almost universally moved by the accomplishments and traits that make Duncan so unique in the modern game.

Around Duncan, San Antonio has crafted a locker-room environment that you won't find anywhere else. No one ever whines about minutes or shots or the lack of spotlight that filters to their market. Two key rotation regulars -- Ginobili and Bruce Bowen -- followed Duncan's team-first influence to take less money upon re-signing with the Spurs and help the club's overall financial flexibility. The relationship between franchise savior and coach, meanwhile, prompted the most veteran Spurs-watcher of them all -- San Antonio Express-News columnist Buck Harvey -- to brand Duncan and Popovich as the modern-day Russell and Red Auerbach.

Russell doesn't seem to have a problem with the comparison, either, which will come as another blow to Bostonians who will probably never get over missing out on Duncan in the '97 draft.

"I feel very privileged to see the things he does as a basketball player," Russell says. "I see and understand it. There is no wasted motion and no wasted emotion. It's an absolute thrill because he only concentrates on things that are important.

"Tim and I both play in a way that I can do my thing and leave room for other guys to do their things without bumping into each other."

Said NBA commissioner David Stern, feeling a rare need to speak up for maybe his ultimate (but perpetually overlooked) role model: "[Duncan] is a player for the ages. I'm a tennis fan, and Pete Sampras is one of the greats. OK, he wasn't Andre Agassi or John McEnroe. He just happens to be one of the greatest players of all time. You take great players as you find them."

When the Spurs got him, they had the good fortune of easing him in as Robinson's sidekick, with Avery Johnson around to supply the loudest in-house leadership. And as Popovich reminds: "Timmy began with great character. It wasn't like this was a troubled child that was brought in or anything like that."

"He's smarter than he was when he first came in the league, but the biggest area [of improvement] is his leadership," Robinson said. "He's much more vocal. When he came here, he didn't really want to be that guy. He's stepped into that now, and he's an incredible leader. He's still not overly vocal, but he says things at the appropriate time. He's not afraid to speak up and he's not afraid to go into the press conference and say what he needs to say.

"The whole package, yeah, I think this might be the best basketball I've ever seen him play. When I watched the [Phoenix] series, I thought Kurt Thomas played him as well as anyone I've seen play Tim over the last couple years. And Tim still did whatever he wanted."

The self-proclaimed "best" playoff run of Duncan's life didn't exactly end that way, with Duncan shooting 0-for-5 in the first half in the face of Cleveland's most aggressive double-teaming in the series and signing off with just 12 points on 4-for-15 shooting. Worse yet, there were six turnovers and six missed free throws.

Yet he did manage 15 rebounds, including five big boards (and two big baskets) in the fourth quarter when the Spurs eventually broke the Cavs' spirit by generating a series of extra late possessions. Perhaps you heard eventual Finals MVP Tony Parker say post-game -- after a fourth quarter in which Parker was held scoreless -- that Duncan "gave me the opportunity to play my best basketball" on this big stage. It's true, too. From the series-long perspective, Parker couldn't have scored as freely as he did without all the attention Duncan attracted, just as the Spurs couldn't have corralled James as well as they did without Duncan co-anchoring their defense with Bowen. Duncan was the only guy, from either team, to average a double-double.

All of which is why the lone Finals MVP vote Duncan received was mine.

"Do you worry about what people say? No, because it's going to change tomorrow," Robinson offered, explaining why Duncan -- like the chronically underrated Popovich and Spurs front-office architect R.C. Buford -- is never bothered when the recognition goes elsewhere or that seemingly no one wants to describe all this winning as Jordanesque.

"But I think, in the long run, when people look back at the Spurs and they see this Tim Duncan era, they're going to say, 'We didn't even appreciate what we had.'"