TORONTO -- Given my fellow Canadians' collective national tendency to apologize every other sentence -- and I'm very sorry if you don't believe that -- it's no surprise it takes a lot for someone from Canada to truly and publicly loathe another human being.

To be honest, it's next to impossible to earn the eternal wrath of a typical Canuck. I mean, if Celine Dion, Nickelback and Avril Lavigne couldn't do it, I don't know who could.

Actually, there is one guy capable of piercing our protective bubble of politesse and driving us to angrily take up pitchforks and lit torches. 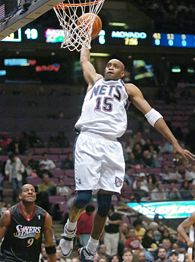 Here's a hint: He's not "Half-man, Half-amazing" just 'cause he can dunk.

I refer, of course, to the one and only Mr. Vince Carter, due back Saturday in the otherwise friendly confines of Toronto for a first-round NBA playoff series against the same Raptors team he once was the centerpiece of.

To say Joe Q. Torontonian is looking forward to booing Carter is like saying Kevin Federline patiently awaits his next divorce settlement. In fact, I think it would behoove GM/Franchise Savior/Will Arnett Impersonator Bryan Colangelo to fly in a small army of throat doctors, lest 20,000 blown-out sets of vocal cords go untended.

As I noted in this ESPN.com column shortly after Carter was dealt to New Jersey -- in exchange for a Rod Thorn-autographed ball, three Old Navy $25 gift cards and two players to be named and laughed at later, if memory serves -- I thought Raptors fans were getting a tad hysterical in their efforts to cast No. 15 as the moustache-tweaking villain who'd tied them to the railroad tracks.

Little did I know they were just getting warmed up.

And Carter's cause hasn't been helped by (a) his being accused in the Tacoma News Tribune of tipping off the Seattle SuperSonics about the Raptors' plays -- a month before he stopped playing for Toronto; (b) distorting his face in derision and mocking the Air Canada Centre crowd for chanting "MVP" at Chris Bosh during a Raps-Nets game this season; and, worst of all, (c) telling broadcaster John Thompson he didn't push himself as hard as he could have when he worked and lived north of the border.

That Thompson interview, in particular, was a real PR killer for Carter's golden-boy persona.

As you'd expect in most cities, admitting you didn't give your all is tantamount to heresy for pro athletes. But such antics are considered especially vile in Toronto, where we prefer our heroes to be undersized, underskilled overachievers in the Tie Domi vein. (Disclaimer: Under no circumstances do I endorse anyone choosing Tie Domi as a hero. See your local medical professional for an explanation why.) A guy fortunate to have the skills, but careless enough not to cultivate them, is simply beyond the pale.

In the minds of Raptors fans, Carter's confession made him worse than all the rest of those who demanded to be moved. Suddenly, he was worse than Damon Stoudamire, the one-time Mighty Mouse whose only crime was being too dense to realize how good he had it in Toronto.

He was worse than Doug Christie, who never met a human being he could speak to without prior written consent from his wife, Jackie.

He was worse than Tracy McGrady, who still was wearing braces his last year as a Raptor -- and who, more than anything else, ached to get out from under the shadow his cousin Vinnie created.

Carter was worse than all of them combined because, as I wrote in that ESPN.com piece, he had been so good to Toronto for so long before abruptly shunning it. He was affable, polite and charming. He invested in the community via charities and business ventures.

But it ran deeper than that. Carter was Toronto's first transcendent sports star. He was the guy who made the world want to watch, the type of mega-marquee athlete Roberto Alomar, Mats Sundin or Rocket Ismail (stop laughing) never could be. He delivered the "world-class" label to a town that was starved for it.

Because he was so superior at so many aspects of the game, and had achieved a level of fame Torontonians never had experienced before, Carter was permitted to coast every now and again.

Since he's been gone, nobody's willing to forget Carter's bad times. To the contrary -- his bad times are all Torontonians prefer to remember. They recall only the indifference, the unwillingness to drive the basket, the shoulder-shrug interviews after a blowout loss, the writhing and grimacing on the floor as the trainer treated him.

Just as I did then, I still think that kind of revisionist history is wrong. Carter not only made more than a few positive contributions to Toronto, but you can make a good argument that the team wouldn't be where it is today if "Air Canada" was still in business.

If Carter had remained in Toronto, the organization would've continued to cater to him, and there's little likelihood Colangelo would have signed up to be ringleader for that no-ringed circus. The Raptors probably also wouldn't have gotten their hands on Andrea Bargnani, as Carter and an emerging Bosh might have been good enough to get them into the first round of the playoffs, but not much farther.

Instead, after suffering for a few years, Raptors fans have been rewarded with a deeper, more committed, better-coached team than at any other point in franchise history. But in addition to the cheers for the home team on Saturday, something else will be coming from every corner of the building: a deafening, endless torrent of boos.

They're coming because Carter got under our skin, stole our hearts, then broke them out of frustration and boredom.

In a matter of hours, we're returning -- in our oh-so-genteel Canadian way -- to exact a most impolite revenge.

Adam Proteau is a writer for the The Hockey News. He can be reached at aproteau@thehockeynews.com.