CHICAGO -- "Tell me, Shaquille, what do you remember most about being teammates with Scott Skiles? What's your best Skiles anecdote?"

I asked the Big Behemoth that question in the visiting locker room at the United Center on Saturday prior to Game 1 of the Heat-Bulls series, wondering whether he'd recount the story of the day he tried to kill his former teammate. But with time short and the locker room about to close, O'Neal did not have the opportunity to spill all the details, instead going cryptic on me ("What does anecdote mean?") before throwing me the smallest of bones. 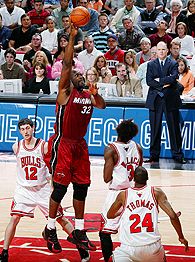 "He always got under my skin. He was like a little gnat," O'Neal said. "He just used to talk too much. Talk about nothing."

O'Neal gave me that quote with a sly grin on his face, no doubt remembering the time the two of them wound up wrestling on the floor at a gym in Los Angeles back in 1994 when Skiles was a wily old veteran and O'Neal was in his second season as a pro, playing for the Orlando Magic.

"He swung, but I ducked under it and ended up in kind of a headlock," Skiles told me Monday morning when I asked him to retell the story of the day Shaq threw a punch at him and he lived to tell about it.

Did the punch connect?

"Sort of," said the Chicago coach, who was not quite in the mood to go over the blow-by-blow details of a donnybrook that happened more than a dozen years ago and has not yet been widely recounted during this series, which resumes Tuesday night with Game 2 at 8 p.m. ET.

So after hearing from both of the principles and coming away with only the scantest details, I took it upon myself to get to the bottom of the Shaq-Skiles fight history -- no matter how long ago it happened, and no matter how much each of them want to let bygones be bygones. Because, let's face it, if there's a story about how someone once almost got punched in the face by Shaq, it's worth telling. And if that someone is now the guy trying to devise a way to stop O'Neal in the playoffs, that story can only serve to make this particular series all the more interesting as it moves forward.

So I placed a call to Milwaukee Bucks head coach Larry Krystkowiak, who was in the middle of the whole thing, and he was more than happy to recount the blow-by-blow for the amusement of y'all.

Here's the way the other Coach K remembers it.

"We were in Los Angeles playing a back-to-back set against the Clippers and Lakers, and we had lost the first one. We came out the next day for practice, and the coaches really challenged us because it was pretty much the low point of the season, there was no effort, and guys were having too much fun off the floor in L.A.

"So the coaches brought us in and divided us into three teams of four guys each, and we played half court. And since I was the biggest guy on my team of four, I was the guy who had to check Shaq. So this turned into a really intense practice, the coaches weren't calling fouls, and Shaq and I were really going after each other and talking at each other.

"So Skiles, who was the captain, pipes in and says, 'Look, mother-------, quit bitching with each other and acting like a couple of p------ and go ahead and fight.' So Shaq and I just charged at each other and threw a bunch of haymakers, and Skiles ended up wrapped around his shoulders hanging on for dear life, and Shaq was like a wild bull trying to shake him off."

Wait a minute, I told Krystkowiak. If the fight was between himself and O'Neal, how on earth did Skiles get in the middle of it? 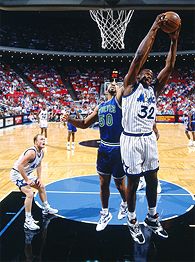 "Well, Scott and I were pretty close, and I think he quickly came to the realization that he may have led his old buddy Larry down the wrong path. So he tried to come to my rescue because he didn't want Shaq to tear me to pieces," Krystkowiak said.

Krystkowiak said he stormed off to the locker room after the fight and was ready to retire on the spot, only to have teammates Dennis Scott and Anthony Bowie come in and talk him off the ledge. The Magic went on to finish that season with 50 wins before being swept out of the playoffs by Indiana in the first round.

In the 13 seasons since, O'Neal has never failed to make it out of the first round.

Either O'Neal or Skiles will be going home for the summer once this series is decided. Meanwhile, O'Neal will be looking for a little more tolerance from the referees in Game 2 after fouling out of Game 1 on a blocking foul with 3:19 remaining in the fourth quarter, capping an unproductive second half after he was Miami's most effective player in the first half, scoring 17 of his 19 points.

O'Neal called out referee Eddie Rush by name after the game -- the type of working-the-refs verbal salvo usually reserved for later in the playoffs -- but somehow (so far) has avoided drawing a fine from the league office.

O'Neal's relationship with Skiles took a turn for the better instead of for the worse on that afternoon almost a decade and a half ago. Skiles, sometimes described as the president of the Shaquille O'Neal fan club, now speaks reverentially about his memories of playing alongside Shaq, how his hands were "unbelievable," how he knew after two minutes of their first pre-training camp scrimmage together that O'Neal would be a perennial All-Star, how O'Neal's sense of humor immediately helped him blend in with his teammates, how even as a ballyhooed rookie he was never standoffish.

O'Neal, too, spoke warmly when discussing how Skiles was the best point guard he ever played with, displaying an uncanny ability to thread passes through the smallest of openings and get the ball to him in the perfect spot to finish a play.

"If you were open by a quarter of an inch, he would find you. If you were in a mismatch, he would get the ball to you. Every time. Every time," O'Neal said. "I could always tell he'd end up being a coach or a GM."

"My memories of him are 100 percent positive," Skiles said.

Those memories, however, might have been a little different if that fight at practice in Los Angeles had included the big man's fist landing flush against Skiles' face. Instead, it was a temporary moment of insanity that drew the two closer and cemented their friendship.

"I always looked as those two as two boxers, one a super heavyweight, the other a featherweight, both just ultracompetitive. They were packaged in two different boxes, but each had a significant aspect on our team," Krystkowiak said.

And now, the story of their brawl has been told once more, hopefully with enough objective detail from Coach K to serve as the definitive Shaq vs. Skiles historical piece when their pugilistic past is referenced in the future.

Then again, this series ain't over, and neither man is the type to back down if the proceedings get personal. So stay tuned, because anything can happen when Skiles and Shaq are in the same building together. History has shown that much to be true.