LeBron's all the talk. So we'll cut to the chase and let our experts answer five questions in the afterglow of King James' performance Thursday night.

1. Where does LeBron's Game 5 rank among the greatest playoff performances by an individual?

Greg Anthony, ESPN: In sports, it is rare to see a performance that will stay with you forever. I've been involved in some really memorable ones -- unfortunately, more often that not, on the wrong side. 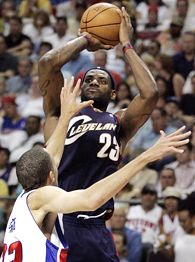 What LeBron James did last night ranks up there with the best we have and will ever see. Before last night, I felt Magic Johnson's championship clincher against the Sixers was the most impressive performance because of the stage and where he was in his career.

But this performance rivals it because there was no cushion for LeBron and he carries the most responsibility by far in the entire league. Plus, no player this young has ever been criticized this much while being so successful. Let's appreciate a performance for the ages by a player who plays well beyond his age!

Henry Abbott, TrueHoop: If he had done it in the NBA Finals, or in an elimination game, this would have to be top 10. As it is, I think you could squeeze it into the top 20, among the best conference finals performances ever.

So No. 1 was Magic's 42-point, 15-board, seven-assist ring-clinching performance sans Kareem and versus Doc and the Sixers as a rookie.

No. 3, Isiah's 43 points (25 in the fourth) while visibly limping on a torn-up ankle in a Game 6 Finals loss to Magic's Lakers.

No. 5 is Walt Frazier's 36-point, 19-assist showing in Game 7 versus Jerry West, Wilt Chamberlain and the rest of the Lakers to clinch the Knicks' first title in 1970. That game is best known for Willis Reed limping out of the tunnel, but Frazier was awesome.

LeBron's performance is No. 7, just ahead of Jordan's 35-point first-half (on six treys) in Game 1 of the Finals versus Portland. Jordan's 63 points against Boston was majestic, but it came in a loss in the first round, so LeBron's game last night was better.

John Hollinger, ESPN.com: It cracks the top 10 for sure. Jordan's flu game is still No. 1 in my book, but this blows anything Dwyane Wade did last season out of the water. LeBron last night was Jordanesque -- that's about the highest compliment I can pay.

Chris Sheridan, ESPN: Well, it was truly an epic performance, and with the stakes being what they were, it was riveting to witness. That being said, in the long run it isn't going to negate The Pass To Donyell as the defining moment of this series if the Cavs lose the next two.

Marc Stein, ESPN: On one hand, I can't put it higher than the 18-to-20 range if we're using the nba.com list as a guide, because LeBron's eruption didn't happen in the Finals and doesn't automatically trump the other non-Finals moments in that top 20.

On the other hand, I might be totally crazy. It was TWENTY-FIVE POINTS IN A ROW in crunch time ... from a 22-year-old ... in a game that all but put his team of no-names in the Finals. Can I get back to you? 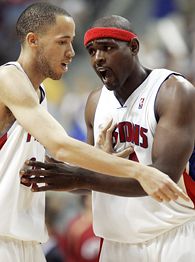 Abbott: Every game has been a nail-biter. Can't see why this would be any different. The pressure is on the fans in Cleveland to give their team the kind of boost that the crowds in Golden State and Utah gave their teams in earlier rounds.

Broussard: Cavs close the series out in Game 6. The Pistons will make a strong showing and the game will be close, perhaps coming down to the last shot, but the Cavs will prevail. LeBron goes for 32.

Hollinger: Maybe Flip Saunders sends a double team. OK, that was too easy. In all seriousness, Detroit has a great shot at Game 6 if it plays as well offensively as it did last night, because even with LeBron being inhuman, the Pistons still nearly won.

Sheridan: To a certain degree, Game 6 is about the Pistons, not the Cavs. Does Mr. Big Shot hit that big shot at the end (he made and missed two big ones in Game 5), or does Rip Hamilton or Sheed take it?

Stein: Don't know if you really want to listen to me because my Eastern Conference prognostications haven't been so hot lately, but I see Cleveland finishing Detroit off in Game 6 this time.

LeBron's confidence can't be higher now after shutting up a world of bashers, his supporting cast will play better at home and the Pistons don't look together enough to save their season. Not at all.

3. How far are the Cavs going this season?


Abbott: I have been saying for a while that if LeBron James goes insane, they'll go as far as they want. If he's remotely mortal, the Cavaliers will lose to the Spurs, if not the Pistons first. I have a feeling they're going to the NBA Finals, though.

Broussard: The Cavs have matured greatly, and their confidence is sky high. They have no fear whatsoever of the Spurs, having beaten them twice in the regular season. Still, the Spurs' experience will give them the slight edge, and they'll beat the Cavs in 7.

Hollinger: It seems likely they're going to win the conference now, but I can't fathom either of these teams doing much damage against San Antonio in the Finals.

Sheridan: It remains to be seen. It was only Game 5 last night, so let's all get a hold of ourselves. Closeout games are tough, especially if you've rarely done it before, and especially since the Cavs went 0-2 versus Detroit a year ago in this exact same situation.

Stein: They're going to the Finals to get schooled by the Spurs, but so what? The Cavs had a great draw to the conference finals, took full advantage and will soon have a chance to go up against the team they've modeled themselves after before they're really ready and with a roster that's by no means title-worthy. Sounds like a bonus plan to me.

4. When this series is said and done, what will we have to say about the Detroit Pistons?

Abbott: Fair or not, I think people are going to question Flip Saunders.

Broussard: Detroit was a solid, very good team, not a dynasty by any stretch. The East was incredibly weak during its five straight years in the Eastern Conference finals, and assuming the Pistons lose this time, they will have won only two of those series.

Hollinger: If they lose, what we'll say is that it's the third time in five years Flip Saunders had the No. 1 seed in his conference and didn't make the Finals, and the second straight year Detroit's offense mysteriously imploded in May.

Sheridan: If they lose, they still are an elite team. They can't overreact and blow it up. They've been too good for too long, and they're still very good. If they win the next two, we can talk about how the Spurs series is bound to go seven games, just like last time.

Stein: Whether or not they can haul themselves off the mat again, it's time for the Pistons to get over themselves. They still have a quality core of players, but they're so much more arrogant than they were before going to the Finals in 2004 and 2005. They unite in blame against Flip Saunders whenever something goes wrong and play with a sense of entitlement that, frankly, has grown tiresome.

5. What's your general take on LeBron?

Abbott: We have always wondered what he was, you know? All that promise was a burden on nights when he just was not on. And he's still embryonic. He'll still have bad nights. His jumper is streaky. You expect that over time he'd learn to hit those free throws, be able to finish going left, and develop a reliable midrange game. But the main thing I'm thinking is  wow  he's the age of a typical rookie. This is the conference finals. I am very happy to be a basketball fan at this moment in history.

Broussard: LeBron James is better than Kobe Bryant and Dwyane Wade. He's the best perimeter player in the world. He makes his teammates better, builds their confidence and engenders their trust like Magic Johnson, yet he can score like Michael Jordan when he feels the need.

As great as he is, he still has room to improve his post game, midrange jumper, free-throw shooting and defense (though he's been a strong defender in the playoffs). That means the future is Bron's, as he'll render Wade, Bosh, Melo, D-Howard, Oden and the rest of his generation's greats to second-tier status, just as Jordan did to Barkley, Ewing, Malone, Olajuwon and the rest of his peers.

Hollinger: Here's what I've felt about LeBron his whole career: No matter how high the bar, he keeps finding ways to exceed it. Nobody came into this league with more hype, and the media sharks were ready to kill him if he didn't live up to it. Instead, he's exceeded almost every expectation.

Sheridan: I've never seen a player grow up this much this dramatically over the course of a single seven-game series. But now I want to see him finish it, and he hasn't done that yet.

Stein: I don't like the way he coasted through some of the regular season. I don't like the stories we keep hearing about his conduct with Team USA last summer. But there's a reason LBJ has been covered like Michael Jordan since he was about 14. It's because he's one of the greatest talents we've ever seen.

The way he quietly absorbed all the criticism after the first two games of this series and responded with a performance for the ages ... give it up to him. A seriously special player and an unforgettable night.