You think they're gonna stink, don't you?

Some teams have always stunk, so it figures they still will. Some lost so many big-name players that it seems they're doomed to years of losing and rebuilding. Some just seem forgotten. But at least four teams coming into the 2003-04 season are not only much better than you think but have an outside shot at the playoffs, though at first glance most see them only as candidates for the No. 1 draft pick.

1. Milwaukee Bucks. They lost the Big Three and the Big Mouth, that being Glenn Robinson, Sam Cassell, Ray Allen and George Karl. They were a basket away from the Finals two years ago. Now, it seems they're just basket cases. Not so fast.

First, let's get out our cliches. There's addition by subtraction. And, of course, less being more.

This was a team that just knew misery. And that's when they won. The players didn't care for one another nor the coach, and he couldn't stand the players. So now not only are the coach and the stars gone, but also the burnouts like Anthony Mason and Jason Caffey. "All the egos," as Tim Thomas likes to say. 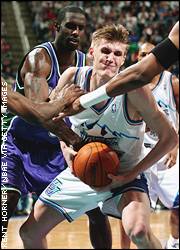 But don't discount what's left. There's not much of anything in the middle, which would disqualify them in any league but the NBA's Eastern Conference. Michael Redd is a terrific shooter and scorer who could average 25 per game. With Redd, Thomas, tough-minded Desmond Mason, underrated and misunderstood Joe Smith and veteran Toni Kukoc, they've got a talented, hard-working, smart perimeter game, as good as any in the conference. New coach Terry Porter is inexperienced, but enthusiastic and understanding. Bucks players may actually enjoy playing for the first time in years.

They've got big guys to bang around, like Brian Skinner. And if rookie T.J. Ford can make the defenses come up at all by improving his shot, they really do have a shot at the playoffs.

2. Toronto Raptors. Vince Carter. Remember him? He's been injured, though you had the feeling he preferred that to playing. The belief now? Carter prefers playing. And when he plays, he's awfully good.

Who knows what will happen with Antonio Davis, who still doesn't understand that Canada really isn't a foreign country. And remember Lamond Murray? He's back and can score on anyone.

Sometimes it just takes a little motivation and hard work. New coach Kevin O'Neill isn't always the most pleasant guy, but he is demanding and defense-minded. He isn't quite a Bill Parcells (take a look at his college record), but he could get himself in the team picture. He won't make friends, but he'll make them work. And it doesn't take much more than that to make a big jump in the East.

The Raptors got a nice surprise in rookie Chris Bosh, who is highly skilled. And don't underestimate Michael Curry. He probably couldn't outscore Ben Wallace in an empty gym, but he's one of those inspirational teammates who gets everyone to give just a darn more. It's no coincidence his teams, like those in Detroit the last few years, usually are considered overachievers. Hard work and having a closer like Carter can get it done.

3. Utah Jazz. This is the year Jerry Sloan misses the playoffs and wins Coach of the Year. Or should. Heck, the Jazz might even make the playoffs. If they do, it will be the greatest coaching job in history. They just barely made it with Karl Malone and John Stockton, who now are gone. The funny thing about Sloan is that he really doesn't care who's there and who's not -- he expects whoever plays to play passionately.

The secret in Utah is out: NBA players don't want to play there. The Jazz tried for every free agent but Magic Johnson and came up empty. It's tough recruiting for a team that plays in a remote, highly religious and overwhelmingly white state. So, big surprise, the roster is filled with international players, like Carlos Arroyo, Andrei Kirilenko, Aleksandar Pavlovic, Raul Lopez and Greg Ostertag.

Look for the Jazz to be, as usual, hard-working and smart. Even if half the team can't understand English. Somehow Sloan will get through to them. They'll run that pick and roll -- and run it again and again and again. And they'll make it work. Few coaches are as demanding or treat players as well as Sloan. He accepts nothing less than all-out effort, but he doesn't play games on players, with extra practice time or the petty punishments many coaches need to show who's in charge. Sloan just is.

Matt Harpring just flat-out works. Kirilenko is a talent waiting to break out. Raja Bell is a hard-working journeyman, and Keon Clark can fill in nicely as a defensive stopper. The talent says lottery. The effort will say competitors.

4. Memphis Grizzlies. They've never won 30 games. That said, winning 30 is harder to do than say in the NBA. If the Grizzlies were in the Eastern Conference, they might finish first. As it is, they're not expected to make the playoffs in the loaded West, but they're going to surprise someone.

Old-timer coach Hubie Brown has the quaint idea that when one player doesn't play well, he'll simply put in another. This strategy was thought to be too juvenile to succeed in the NBA -- it was college stuff. Pros wouldn't stand for it. But now Brown has a bunch of players but not a lot of egos -- the kind of team that may thrive under the "two-team" method.

This is Brown's first full season and first real chance to implement his relay style of basketball. He has 10 or 11 players who have relatively equal ability and are relatively interchangeable. Mike Miller, Shane Battier and James Posey all can play a few positions. Bo Outlaw is versatile, and Stromile Swift can block shots. What they all can do is defend.

They have some offensive talent in Pau Gasol, Wesley Person and Jason Williams, and centers who should see only limited playing time, like Lorenzen Wright and Jake Tsakalidis -- so they can play just as long as they're playing hard.

There's a rhythm to NBA games that rarely is interrupted. Players coast through long stretches, saving energy to finish the game. The stars, playing 35 to 40 minutes per night, see no use in exerting themselves early. Brown and Jerry West have put together a team with few players who could even crack the rotation of the better teams in the West. But they'll be like an annoying fly, always buzzing around, always there, always coming back after being swatted away. And it just may work to steal one of those last playoff spots in the tough West.

Sam Smith, who covers the NBA for the Chicago Tribune, is a regular contributor to ESPN.com.