Charley Rosen, author of 18 books about basketball and a former assistant coach under Phil Jackson in the Continental Basketball Association, spent a day with Jackson in every month of his debut season with the New York Knicks, during which the Hall of Fame coach-turned-executive talked frankly about his roster and his new role as team president. Read Part 1, Part 2, Part 3, Part 4, Part 5, Part 6, Part 7 and Part 8.

Almost 11 months after Phil Jackson opened his first training camp as the New York Knicks' president, the roster he brought with him to West Point, New York, is virtually gone. 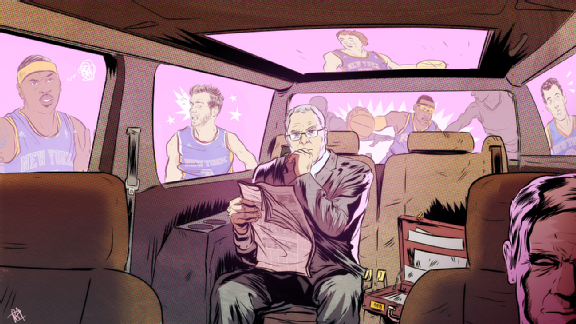 In our nine-part series, Charley Rosen details the Zen Master's trying first season as president of the New York Knicks.

Amar'e Stoudemire, the team's marquee signing in the summer of 2010, was waived mid-season. Long-time Knicks guard J.R. Smith was traded away, as were Iman Shumpert, Tim Hardaway Jr. and Pablo Prigioni. Andrea Bargnani and Samuel Dalembert, among others, were not re-signed this offseason.

Star player Carmelo Anthony remains, as does Jose Calderon, who arrived last offseason via trade. But all in all, 13 of the 17 players the Knicks brought with them to training camp last season are no longer on the current roster. This summer, Jackson went to work building a new one.

After adding two first-rounders (and one second-rounder, who will remain overseas) in the draft, the Knicks then turned to the free-agent market. Most of the high-profile big men Jackson had his eye on ended up signing elsewhere, so instead, he focused on what he considers to be the most important aspect of the game: defense.

"That's because defense creates offense," he says. "From Bill Russell and even to [this year's] championship Golden State Warriors, this has always been the case."

With his second training camp on the horizon, Jackson gave his outlook for each of the Knicks' offseason signings:

"He has the capability of playing aggressive defense on big guards and small forwards, plus he's a shot-maker. In addition to his 3-point range, Arron can be very effective scoring in the low post and at the pinch post.

"Some NBA watchers have questioned whether or not Arron has anything left as he nears his 30th birthday, but I'm positive that he does. He has a gym in his Las Vegas home and he works out religiously. Actually, he's such a hard-worker that he holds his teammates accountable if they try to cut corners in any way. I look for Arron to be a leader on this team. He wanted us and we wanted him, so Arron and the Knicks is a very good match."

"He played in the D-League for us at Westchester and will come to camp. He has a great motor, which can lead to some hyperactivity. His key is learning how to control and sustain his energy on defense and be a consistent scoring threat."

"Since the Lakers played in the same division as Phoenix, I've been able to watch Robin develop," Jackson notes about Lopez, a Sun for four seasons before stints in New Orleans and Portland. "He's become a solid player with a great desire and ability to both rebound and play defense. He's good in defending against screen-rolls, because he can stay in front of most guards as they go over the screen and can delay them until the guard's defender can catch up. Coupled with the proper rotations behind him to cover the rolling screener, this is a proficient way high screen-rolls can be handled.

"Also, Robin can hold his spot in the pivot and score with either a right-handed hook or a turn-around jumper, and also make intelligent passes. These qualities are absolutely necessary for the triangle to be properly executed. As a bonus, Robin also has 15-foot range on his jumper.

"Above all, he's a guy whose basic motivation is to fit in with whichever team he's playing for. I'm happy that he wanted to come to New York."

"He's a strong guy and a solid NBA player who can set sturdy screens, can pass the ball and has 16-to-18-foot shooting range. While Kyle isn't really a shot-blocker, he plays good position as well as good help defense. I also like his on-court poise. With us, he has a chance to play power forward and/or back up Robin at center."

"He's a power guy in the low post who can bang his way toward the basket where he can score with an accurate jump hook or a turn-around jumper. Kevin's a relentless offensive rebounder and is serviceable on the defensive glass. He works hard and plays good enough defense to be a valuable rotation player."

"A lot of people have questioned our signing Derrick, but I think he has a considerable upside. He runs, finishes in early-offense situations and has the strength to finish in a crowd when he attacks the rim from the wing. He's working on his 3-point shooting and his intermediate game. I also think he can play power forward against certain opponents.

"I mean, there's no doubt that Derrick has the talent, size and strength to be a more-than-capable NBA player. However, his development has been hindered by several factors. From the start of his pro career, being the second overall draft pick has been like an albatross around his neck, something that he, and lots of other people, felt a lot of pressure to live up to. I told him that right now he's an NBA player and it no longer makes any difference where he was drafted. He just has to learn how to play the game the right way. That means developing a defensive mindset, developing an intermediate game and improving his long-range shooting.

"Another reason why Derrick hasn't really blossomed was that he never found a comfort space in an NBA offense, which means that his role was never clearly defined. Was he a post-up or a pull-up scorer? Was he a small or a power forward? Hopefully, he can find those answers with us.

"Derrick is an L.A. kid, so he saw plenty of Lakers games. That, and his studying of videos on YouTube, has him confident that he already knows the triangle.

"Anyway, Derrick is a player who will hopefully find his way back into a starter's role."

"Except for a 10-day contract with the Clippers in 2014, Sasha hasn't played in the NBA for four years, but at age 31 he still has plenty of game. He's a classic streak-shooter who, when he's zeroed in, can totally change a game in three minutes. He'll be a significant force for us coming off the bench.

"Sasha is also quick, long and angular, which makes him a feisty defender who can chase, and stick to guys like Kyle Korver who are always on the move.

"The bonus is that, having played for me in L.A., Sasha knows the triangle and can help our off-guards get the hang of playing on top of the floor."

With about a month left before official preparation for the 2015-16 season begins, what does Jackson see for his newly assembled roster?

"We have a number of new players, so they may struggle early as they learn how to play with each other," he says. "Where we end up as the season progresses is an unknown, but we have improved our roster and have a chance to be a good team."