In today's NBA, the 3-point shot is a more prevalent weapon than ever. Just look at the Golden State Warriors, riding the hot shooting hand of Stephen Curry en route to a historic season. But what makes teams like the Warriors and San Antonio Spurs (who face each other at 8:30 p.m. tonight in a marquee matchup on ABC) especially tough to defend? Their ability to stretch the defense and not just create 3-pointers but wide-open 3s, where the chance of success is even greater for shooters like Curry and Kawhi Leonard. The two teams have a knack for getting these great looks from long range because of their unselfish passing. We looked at all NBA player data since SportVU began tracking it three seasons ago and found that no team combines passing, accuracy on open 3s and team success like the Warriors and Spurs. So with these teams facing off, expect at least a few such looks in tonight's game. 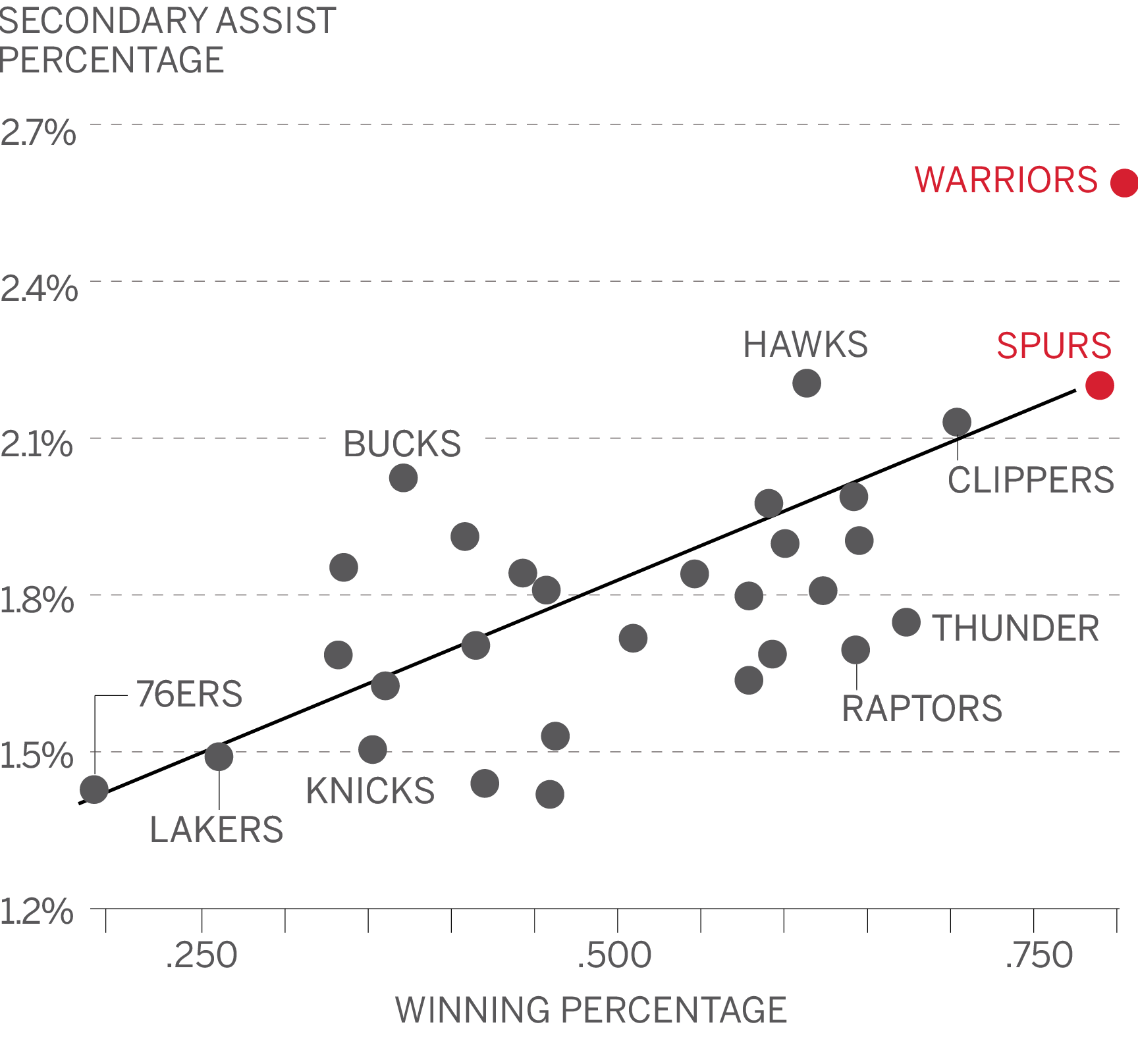 Most secondary assists, past three seasons

Here are the top 10 teams in secondary assists from 2013-14 to present. If you break it down by totals rather than by rate, the Warriors and Spurs are again at the top of the heap as the most unselfish passing teams, and the others here have winning records over the past three seasons with the exception of the Bucks (.369, seventh worst in the league in that span). The Hawks excel at unselfish ball movement, and for good reason -- head coach Mike Budenholzer brings a pass-first philosophy from his tenure as a Spurs assistant from 1996 to 2013. The Hawks are built to be the Spurs of the East. 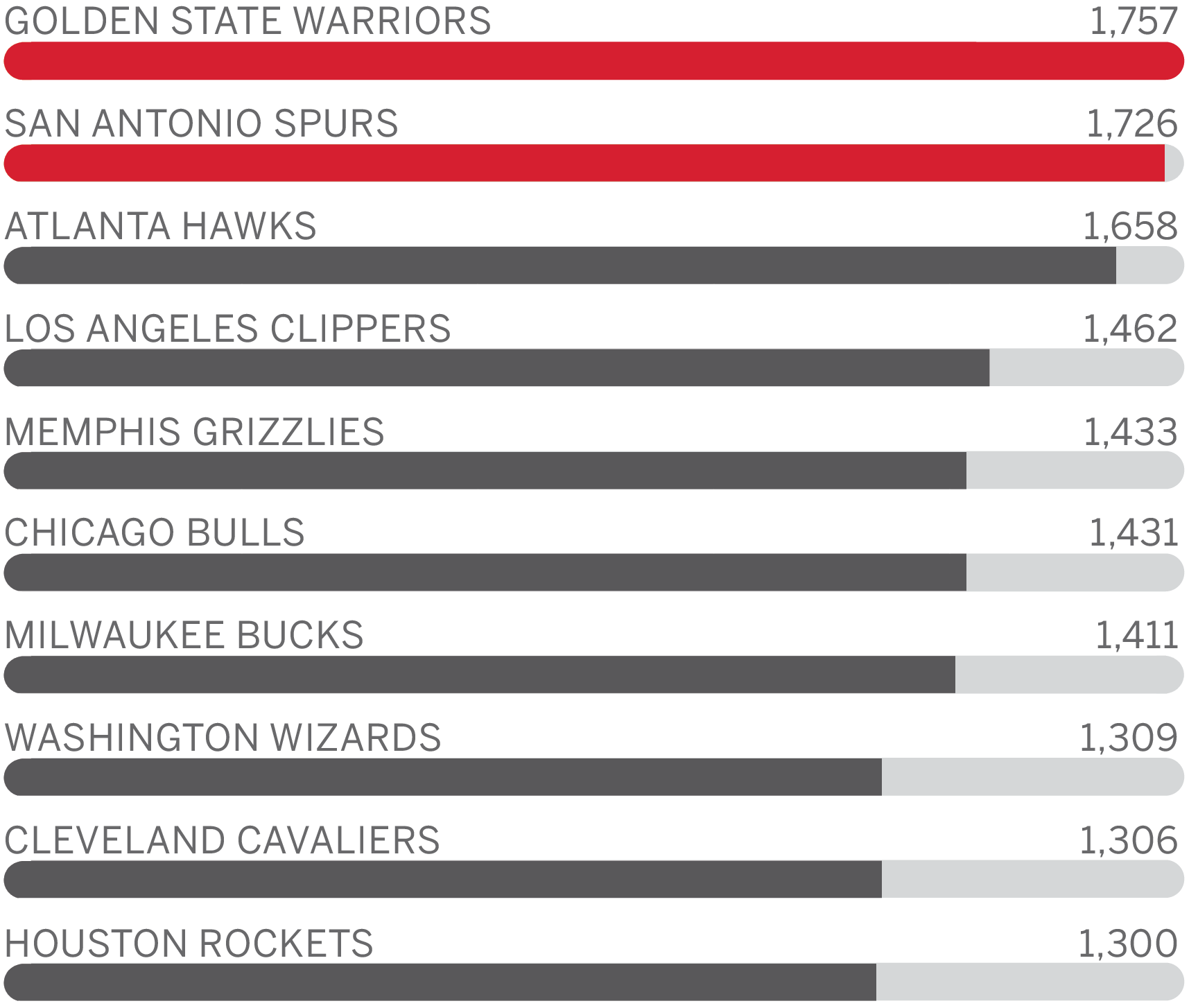 Beyond a willingness to be unselfish to set up the best shot, you have to be able to bury the open 3 when the opportunity comes along. And the Warriors and Spurs are as good as anyone at that. On 3-pointers in which the closest defender is at least 6 feet away, the Hawks make more than anyone (1,200) but at a low percentage (38.4 percent, while the Warriors are at 42.2 and the Spurs 41). And interestingly the Raptors actually have a 41.4 field goal percentage on open 3s, third best in the league, but their isolation-heavy approach doesn't afford them a lot of those chances -- Toronto is 19th in open 3s made and 23rd in attempts, relying more on the slashing of leading scorer DeMar DeRozan (fourth in the league in total isolation plays according to Synergy Sports). Only Portland, led by sharpshooters Damian Lillard and the emerging C.J. McCollum, can boast a similar shooting percentage (41.7) and volume of open 3s made (1,001) similar to the Warriors and Spurs. The cumulative data from the past three seasons: 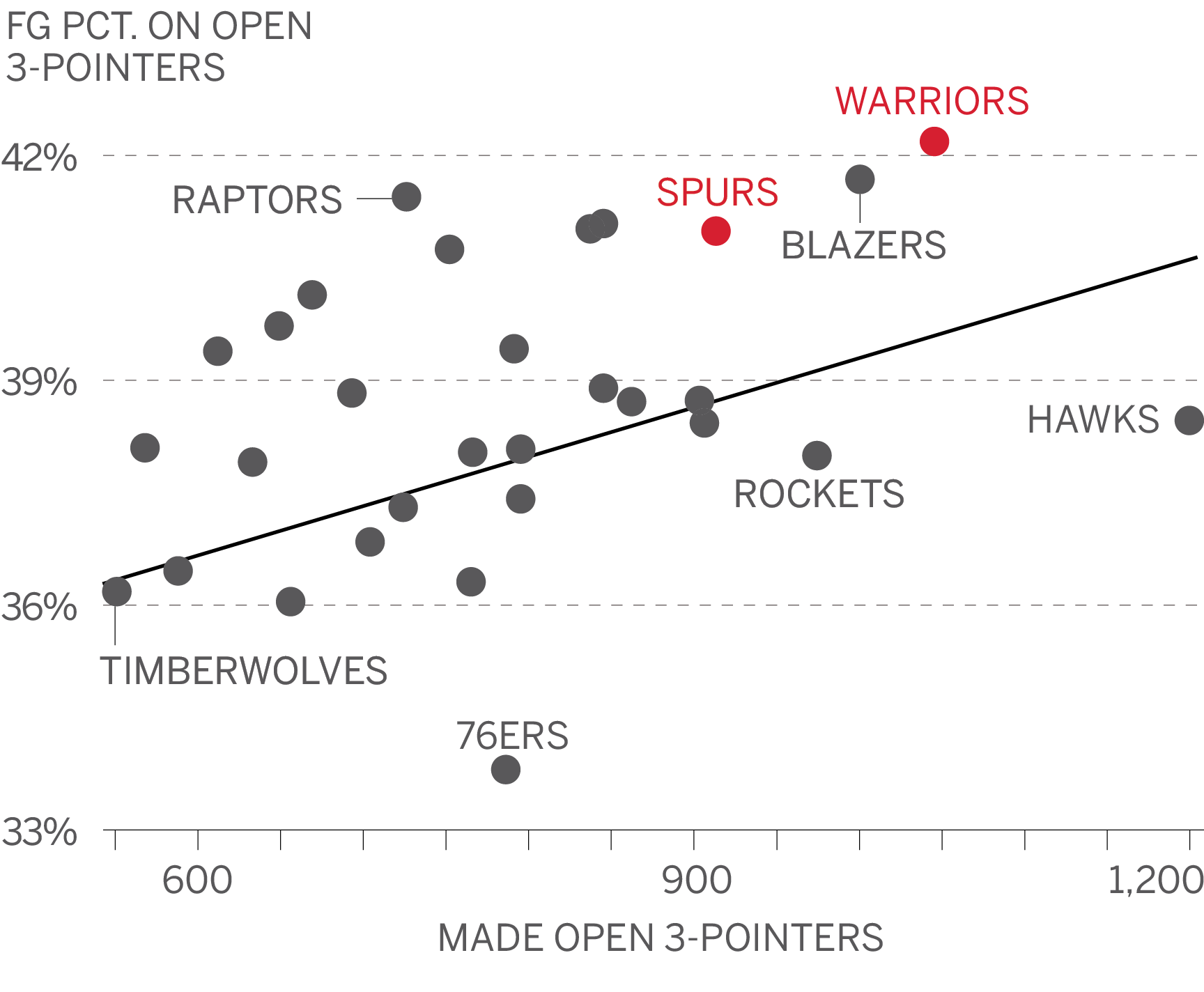 How the Warriors do it

Curry's brilliance shines through twice in this sequence -- the dazzling no-look, behind-the-back dish to Green off the drive helps get the Kings' defense out of position, and then his constant movement leads him to the corner, where Klay Thompson finds him for an open 3. Thompson, the second-best long-distance shooter on the planet, gives up a good shot for a great shot. And just look at the nearest defender to Curry: Rajon Rondo is in another ZIP code and doesn't even attempt to run at the shooter.

How the Spurs do it

San Antonio uses player movement and shrewd passing to create good shots like this all the time. Duncan is the 7-foot facilitator at the top of the circle in this sequence, possessing the ball for just a second on each of his two touches. When the defense collapses toward Green as he moves to his right, he dishes to Duncan and quickly vacates the area so Duncan can find an opening for a teammate to get a shot off. Milwaukee's Jabari Parker, not known for his defensive prowess and tasked with checking the lightning-quick Leonard, doesn't stand a chance here.

Numbers as of Friday morning. Statistics from NBA.com, Basketball-Reference.com and Synergy Sports. Images via NBA video.