NEW YORK -- In Greg Pak's colorful and fantastical world, the award-winning comic book writer and filmmaker has superheroes from all walks of life accomplishing amazing feats.

But even Pak, like most of New York City in 2012, was captivated by "Linsanity" and in awe of Jeremy Lin's superhero-like origin story, going from a D-Leaguer who slept on a teammate's couch to Sports Illustrated cover boy overnight.

"I was a nerdy kid who didn't really care about sports," Pak told ESPN. "But I was living in New York when 'Linsanity' happened, and it was a mind-blowing experience. I totally got sucked in. I mean the whole city was happy. It was a really kind of an amazing phenomenon. You would see random people start talking about it [all over the city].

So Pak found a way to add Lin to the color-splashed pages of the Marvel universe of comic book superheroes. On Wednesday, Lin appeared in Pak's latest issue of Marvel's "Totally Awesome Hulk."

The Brooklyn Nets point guard said he was shocked when he first found out that Pak wanted to add him into the Hulk's storyline.

"'Man, how are they going to use me, or what is it going to look like, especially me being Asian," Lin said in an interview with ESPN. "I was really interested to see what would happen. I loved everything about it. ... Growing up, watching the movies or whatever it might be, we have all experienced some sort of fandom toward superheroes."

Pak, who is Korean American, co-created Amadeus Cho, a 19-year-old Korean American genius, with Takeshi Miyazawa more than a decade ago. Cho now has taken over the mantle and the powers of The Hulk from Bruce Banner and is a rare Asian American superhero.

Lin -- the first American-born NBA player of Chinese or Taiwanese descent -- said he is fully aware of the potential impact Pak's character can have. He knows of the struggle many Asian American males face trying to land significant, strong and impactful lead roles as opposed to token portrayals that play off Asian stereotypes. For instance, none of the top 100 grossing films in 2015 featured an Asian actor as the lead or co-lead, and 49 of them featured no Asian characters at all, according to a report from the Annenberg School for Communication and Journalism at USC.

"I have friends who are kind of into acting and the entertainment industry," Lin said. "You kind of see how Asians and Asian-Americans are kind of portrayed in films over time.

"I feel that there have been a lot barriers, but this is a big step in the right direction. In terms of just making Asians more mainstream [and] not just in the stereotypically Asian way where it is almost like sometimes, it is like the token Asian guy -- you are being made fun of, in some ways you got to be on there with an accent or something like that. It's awesome that [Cho] is this really prominent and masculine figure as well."

Pak has been cognizant of trying to create or cast diverse characters into his stories and films, such as "Robot Stories," which starred Japanese-American actress Tamlyn Tomita and won 35 awards.

There are Asian characters throughout the Marvel Universe, but not many are of Asian-American descent such as S.H.I.E.L.D.'s Jimmy Woo and Cho.

"Over the years, writers have created tons and tons of characters of all different backgrounds, but a lot of the Asians characters in comics are Asians from Asia," Pak said. "That is not just Marvel, that is all comics, which is great. But I have always been an Asian American and had a special interest in seeing Asian-American characters. Historically there hasn't been a ton."

Nets teammate Brook Lopez, a lifelong comic book fanatic, went out to pick up five copies of the issue on Wednesday before posting 20 points and seven rebounds to help Brooklyn beat the Lakers later that night.

The center, who can practically deliver a thesis on any Marvel or DC Comics character, gave Lin's comic debut his stamp of approval.

"Oh, I can't state how jealous I was!" Lopez said repeatedly. "I didn't even find out about it until I read my comic book websites ... It was spot on. Great stuff. There were panels that I swear that [Pak] was behind me (with Lin and the Nets) looking at Jeremy while he drew it. And it was pretty true to his voice.

"[Lin and Cho] have a lot of similarities. Both Asian American, same haircut, both geniuses -- genius-level intellect. They get along very quick. It's a two-parter, left me on a cliff-hanger."

Pak says after the two back-to-back issues with Lin, the "Totally Awesome Hulk" will feature Cho joining forces with other Asian American idols from Marvel.

"The next story in the 'Totally Awesome Hulk' is going to be a team-up with Amadeus and a bunch of other Asian American characters, including Jimmy Woo, who is one of the oldest and most classic Asian American characters in Marvel," Pak said. "More recent characters like Silk, who is a Korean American woman with spider powers in the Spider-Man universe and Kamala Khan, the new Ms. Marvel, who is a tremendous character (and Pakistani American). The books more and more reflect the world in which we live, and it is a fantastic thing. It is great to be a part of it."

Lin never dreamed of being in a comic book. While Pak kept Lin in the loop over the storyline, Lin largely stayed out of the creative process and let Pak do his thing.

Even though the two only recently met after a Nets game, Pak has followed Lin closely, reading plenty of stories and books on the Nets point guard and watching the documentary about Lin -- "Linsanity" -- to get a feel for Lin's character and vocal rhythms.

"It is such a great story," Pak said of Lin's rise. "I think there is something about superhero stories, a lot of them start from a place where the hero is an underdog. You look at Bruce Banner, Peter Parker, maybe not so much for Bruce Wayne -- although Bruce Wayne is like, poor little rich boy, his parents have been murdered. Very often these superheroes come from a place where life has not treated them well.

"Then they find something inside or whatever the case may be, but they rise to the occasion and have this transformation and are tested as people and heroes. Athletes are the closest thing we got to superpowers."

Pak says there is a natural bond between Lin's and Cho's characters.

"They have something in common of being thrust into a position of leadership and a responsibility," Pak says. "Jeremy has been very open about this kind of feeling, about having a platform, and he needs to step up and use that platform responsibly when the time comes, and that is exactly some of the stuff that Amadeus struggles with as well.

"Amadeus is a cocky kid who thinks he knows everything, he is a lot of fun, so when he becomes The Hulk, he thinks he will be the best Hulk there ever was. But of course, being The Hulk, being the strongest one there is and running the risk of losing control of your emotions, there are huge responsibilities. Amadeus has a ton to learn."

Lin jokingly admits you wouldn't like him when he's angry, as Banner, the original Hulk, famously says. But if Lin were to possess one super power, he says it would be the ability to fly.

"I have always wondered what it's like to fly," Lin said with a chuckle. "I would be a lot better at basketball if I could fly." 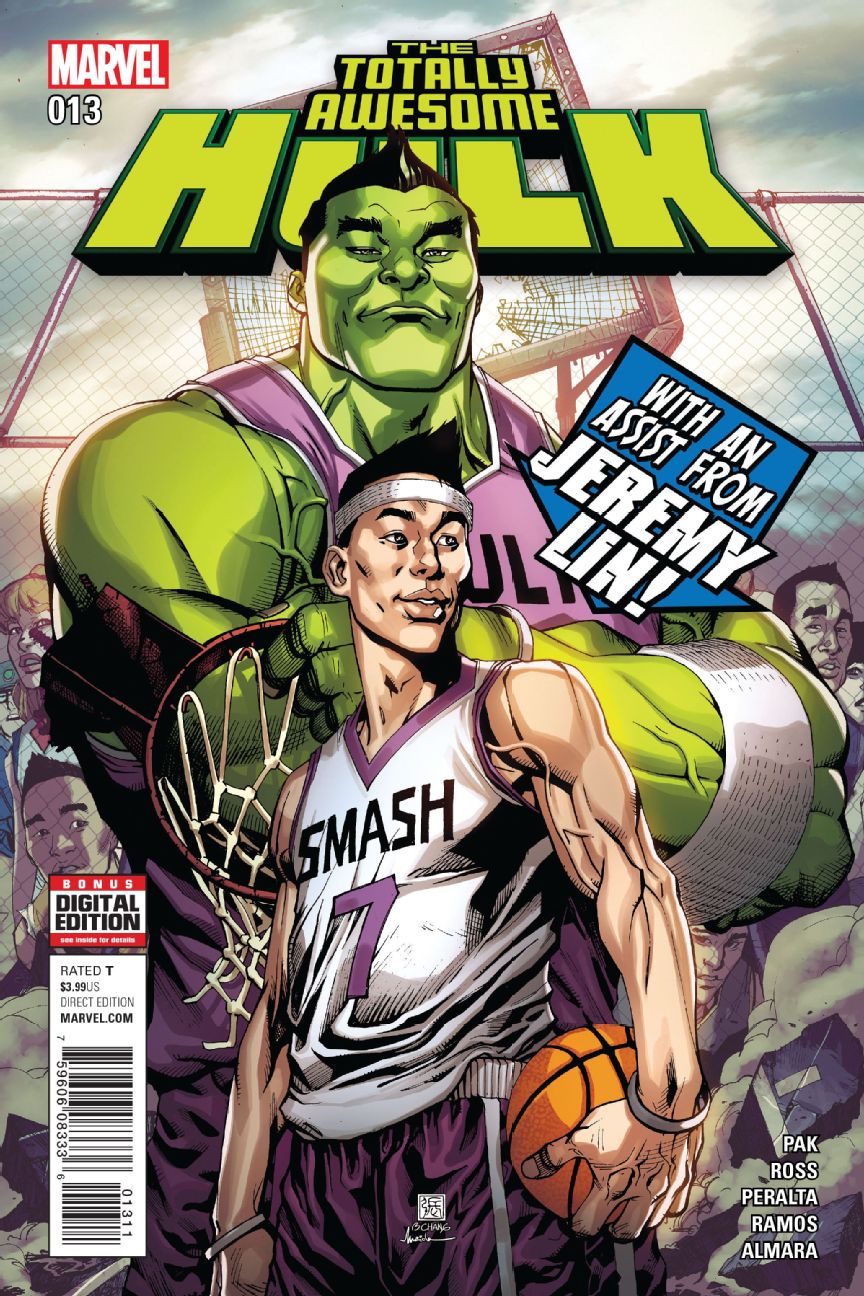 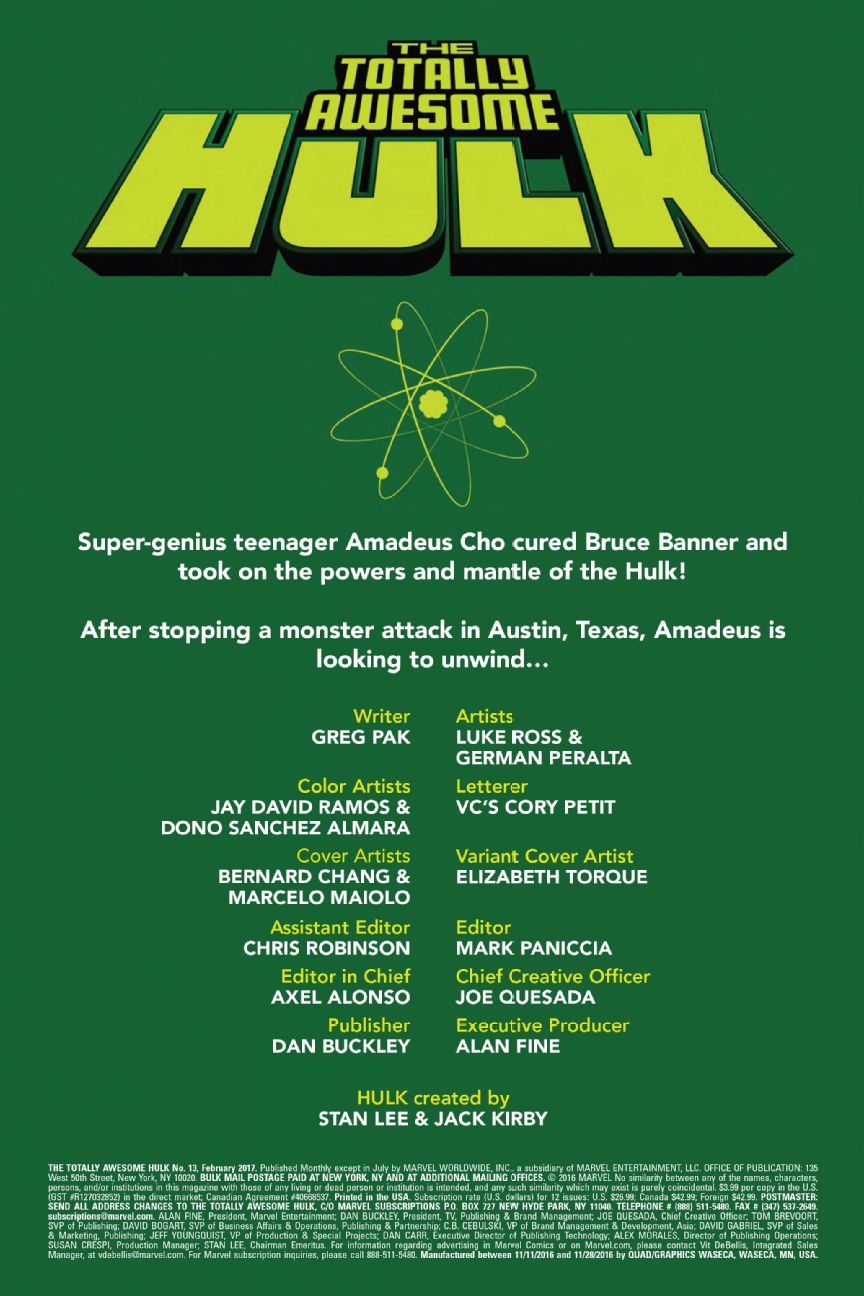 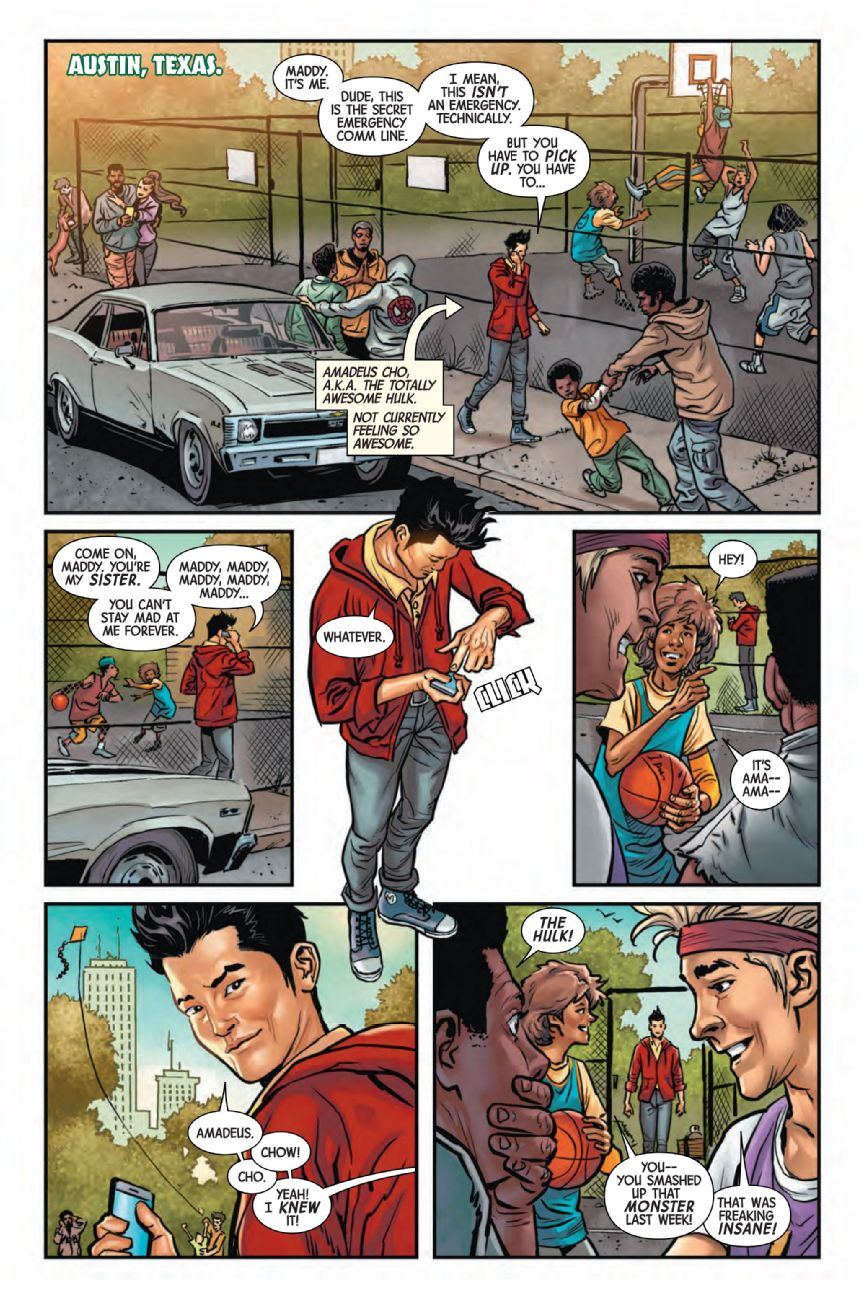 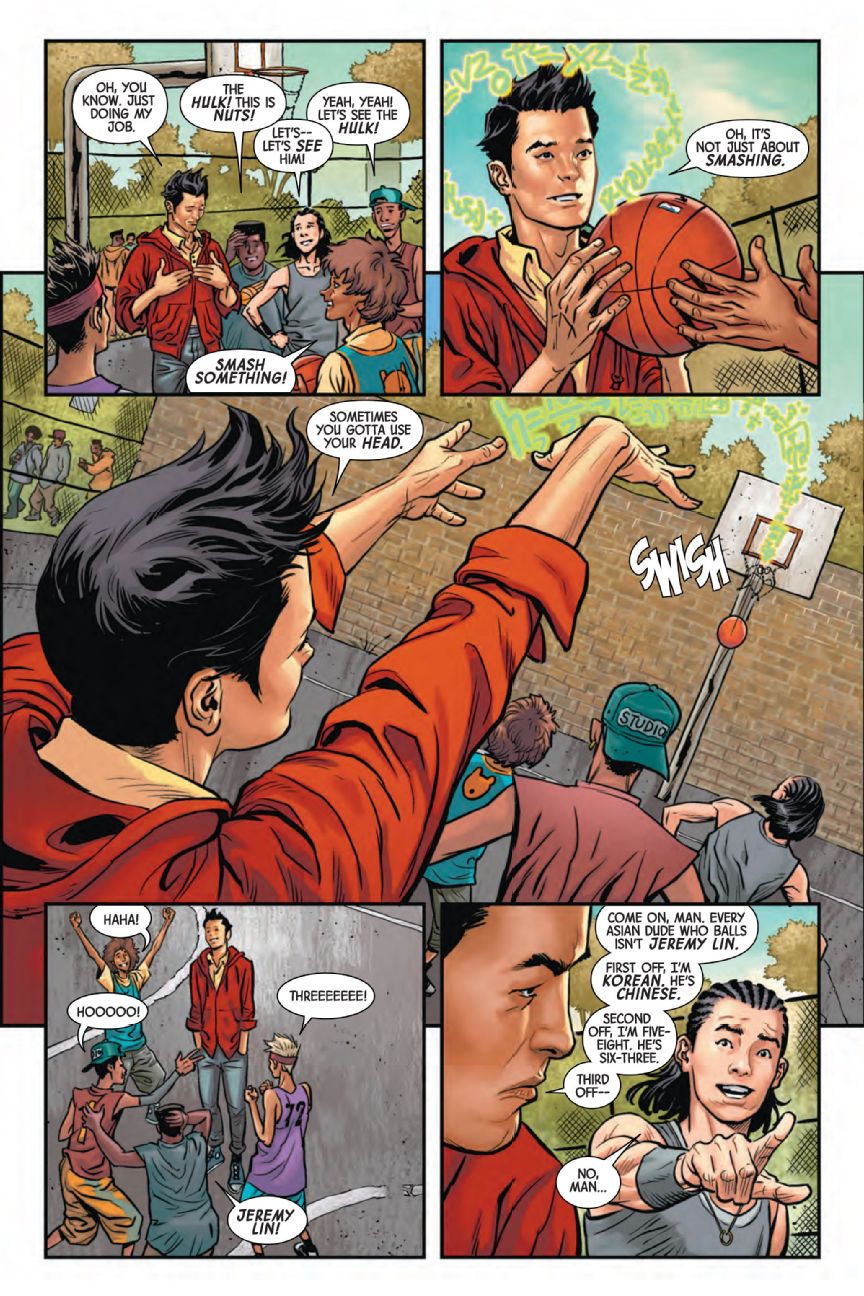 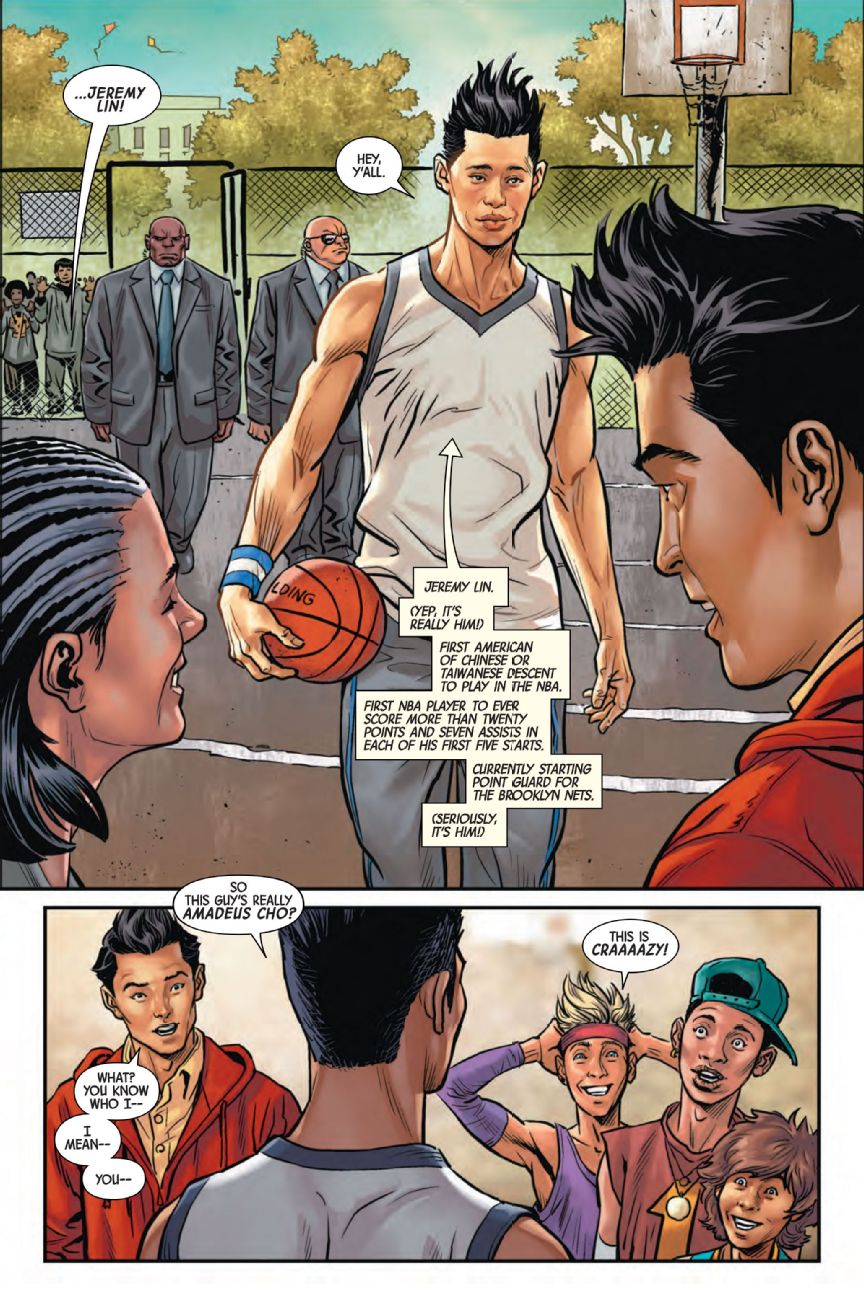 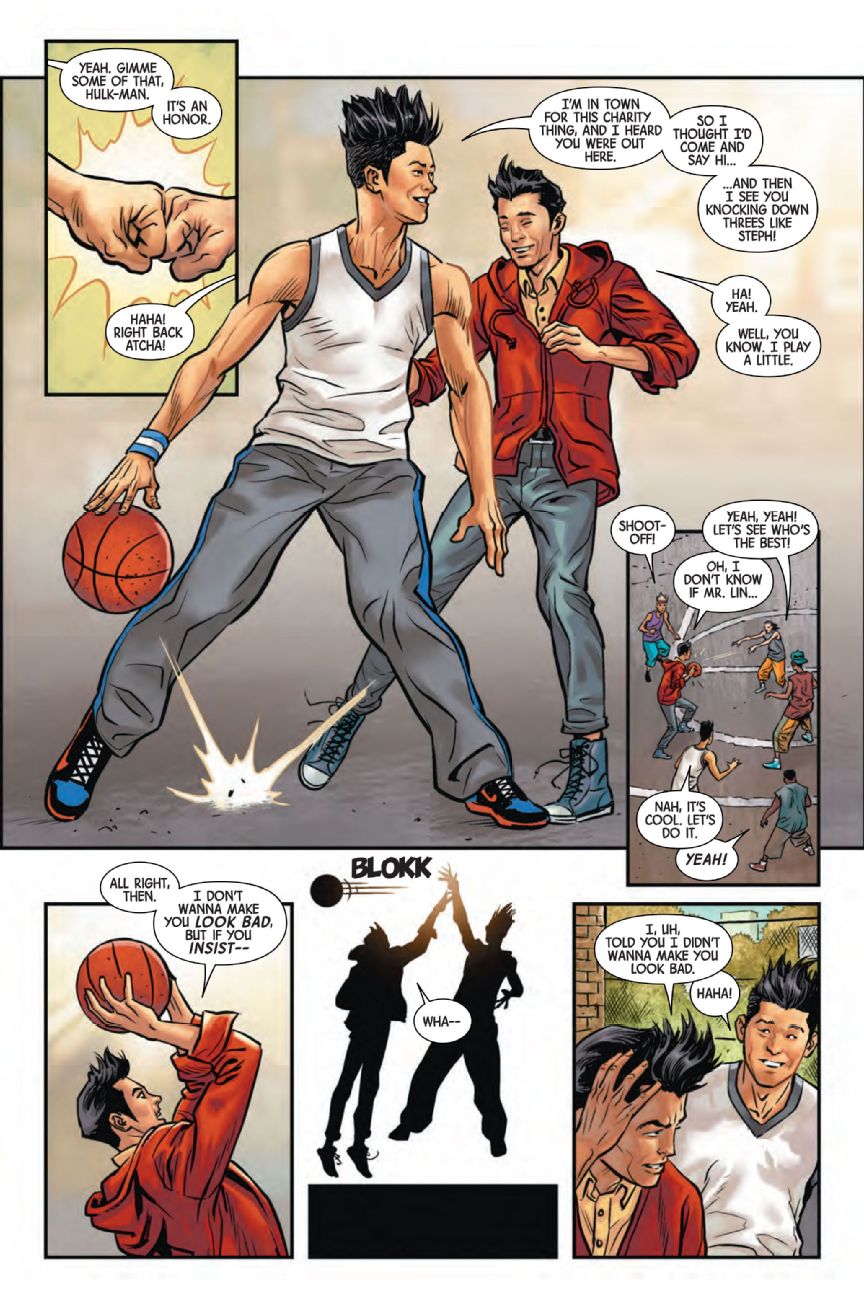