When Kevin Durant checked out just two minutes into Tuesday's game against the Washington Wizards with a knee injury after Zaza Pachulia fell into his leg, he took one of the most underrated streaks in the NBA with him. For the first time since Feb. 27, 2009, Durant failed to score in double-figures, a streak that lasted 562 games. 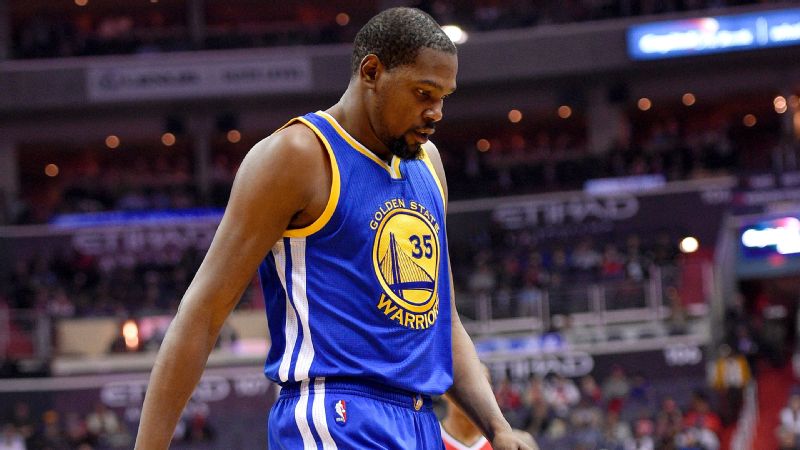 That game in 2009, Durant scored only six points before leaving in the first quarter against the Dallas Mavericks with an ankle sprain. Only eight times before Tuesday's injury had Durant failed to register at least 10 points. Take away his rookie season and it's only two times.

It's pretty simple: The only thing on planet earth than can stop Kevin Durant from scoring is injuries. And with him out at least four weeks because of an MCL sprain and bone bruise, the Warriors will have to compensate with not having maybe the NBA's purest, most ruthless scorer.

Then came the Jones fracture in training camp before the 2014-15 season. Durant reported to the team's doctors he was feeling some discomfort following a preseason game, and it was later discovered he had a small crack in his right foot. He underwent surgery that appeared to be successful, returning to play for a stretch of nine very good games, albeit under a minutes restriction.

Durant had just dropped 30 points in 19 first-half minutes but stepped on Marreese Speights' foot right before halftime, rolling his ankle and sidelining him for six games. He came back, played wonderfully and then stubbed his big toe against the Cavaliers on a drive to the basket, causing him to sit two games. He played 37 minutes against the Grizzlies but came back too soon and then sat out two more.

Because of a screw inserted in his surgically repaired foot rubbing against a bone, Durant was shelved again, undergoing a second surgery to change screws. He tried to come back, returning to practice, but soreness persisted, and eventually he was removed from all basketball activities and underwent an intensive bone graft procedure. Only 27 games followed his MVP campaign, in a season Durant struggled with mentally as he tried to stay positive. He had concerns about his career, hearing all the comparisons to Bill Walton and Yao Ming.

It wasn't that Durant was injury-prone, though; it's that he has extremely odd feet -- they're like water skis. Durant fell into a rare 8 percent of people who didn't experience a successful initial Jones fracture surgery. But he returned the following season, missing only 10 games (six because of a strained hamstring, two because of a sprained toe and two because of rest). The Thunder worked to reduce Durant's workload throughout the season, not putting him on a minutes restriction per se but making it a point to monitor the wear and tear he was experiencing.

But throughout Durant's injury history, there has been a constant theme: He's had no issue whatsoever with post-injury rust. If Durant is to return for the postseason, any concerns with his reintegrating to the Warriors should be mild. As Durant has said before, the one thing that doesn't ever leave him is his jumper. It has always been about conditioning and being able to find a rhythm on the defensive end for Durant. The offense never leaves.

During his foot issues, Durant made a mental registry of all the doubters, paying attention to those who had worried he wouldn't be the same player he was before. Durant is driven, obviously, but finds motivation in doubt. Some of it manifested himself. Durant admitted to being an "idiot," reading Twitter and Instagram about what people were saying while he was out with his foot injuries.

He came back, though, and produced a season as efficient and excellent as ever.

"Sometimes you gotta remind people what you do," Durant said after returning from his foot injury. "They tend to forget."

The Warriors are built to absorb Durant's injury, at least for the remainder of the regular season, with the unique advantage of having three other All-Stars on the roster. But if Durant is able to return for the postseason as expected, there's a good chance he'll slot right back in as if he never was gone at all.