The San Antonio Spurs won the 2014 NBA championship after finishing with a league-best 62 wins, but one loss didn't show up on their record that season. Before a December 2013 game in Mexico City against the Minnesota Timberwolves, the Spurs were blown out by a team of small boys without shoes.

Those 10- and 11-year-old kids -- the A-team from the Mexican Indigenous Basketball Academy (ABIM in Spanish) -- had made headlines around the world a couple of months earlier by winning an international tournament in Argentina while playing barefoot. They barely reached the waists of the NBA stars, but they flew past the Spurs, crossing over Patty Mills and draining layups over Tim Duncan. The Spurs moved slowly; they had decided to take their shoes off like the young boys, but unlike the kids, they weren't used to playing ball barefoot.

The teams laughed and spoke through the universal language of basketball. The only pro who could communicate in Spanish with the youngsters, members of the indigenous Triqui tribe from the mountains in the southern Mexico state of Oaxaca, was Manu Ginobili.

"He gave us a tip, that we'd have to work hard at the sport, but also in our studies so that we can get ahead -- and never to give up," Maximiliano Celestino Rodriguez recalled in Spanish.

Ginobili's message meant a lot to the basketball-loving kids from some of the most impoverished and illiterate regions of Mexico, and four years later they are on the verge of their next big accomplishment. Their coach and mentor, Sergio Ramirez Zuñiga, is in the final stages of organizing scholarships to American and Spanish schools so the A-team members can continue their high school careers and be one step closer to their college dreams.

Another big change since their days in the spotlight? They no longer play barefoot thanks to the increase of donations and other funding that came with the academy's exposure.

"At the beginning it was a bit uncomfortable, but little by little, we got used to using shoes," Maximiliano, now 15, said at one of the academy's campuses outside of Oaxaca City. "Now it's more comfortable."

But shoes were not the only thing they've had to get used to. In the Triqui region, most children never finish elementary school and are put to work. Both boys and girls are often married by the age of 15.

"I worked in the fields with my parents before," Maximiliano said. "They told me that school wasn't important going forward."

On an early May morning, Maximiliano and the other members of the A-team ended their practice with a cheer counting the numbers off in their native tongue, "1-2-3-Triqui!" In the academy, the 7-9 a.m. practice is only the beginning of a full day. To stay in the program, the players must attend classes and maintain an 8.5 grade average (out of 10). But Maximiliano doesn't mind. He likes school now and hopes to attend college, something no one in his family has ever done, and study civil engineering. 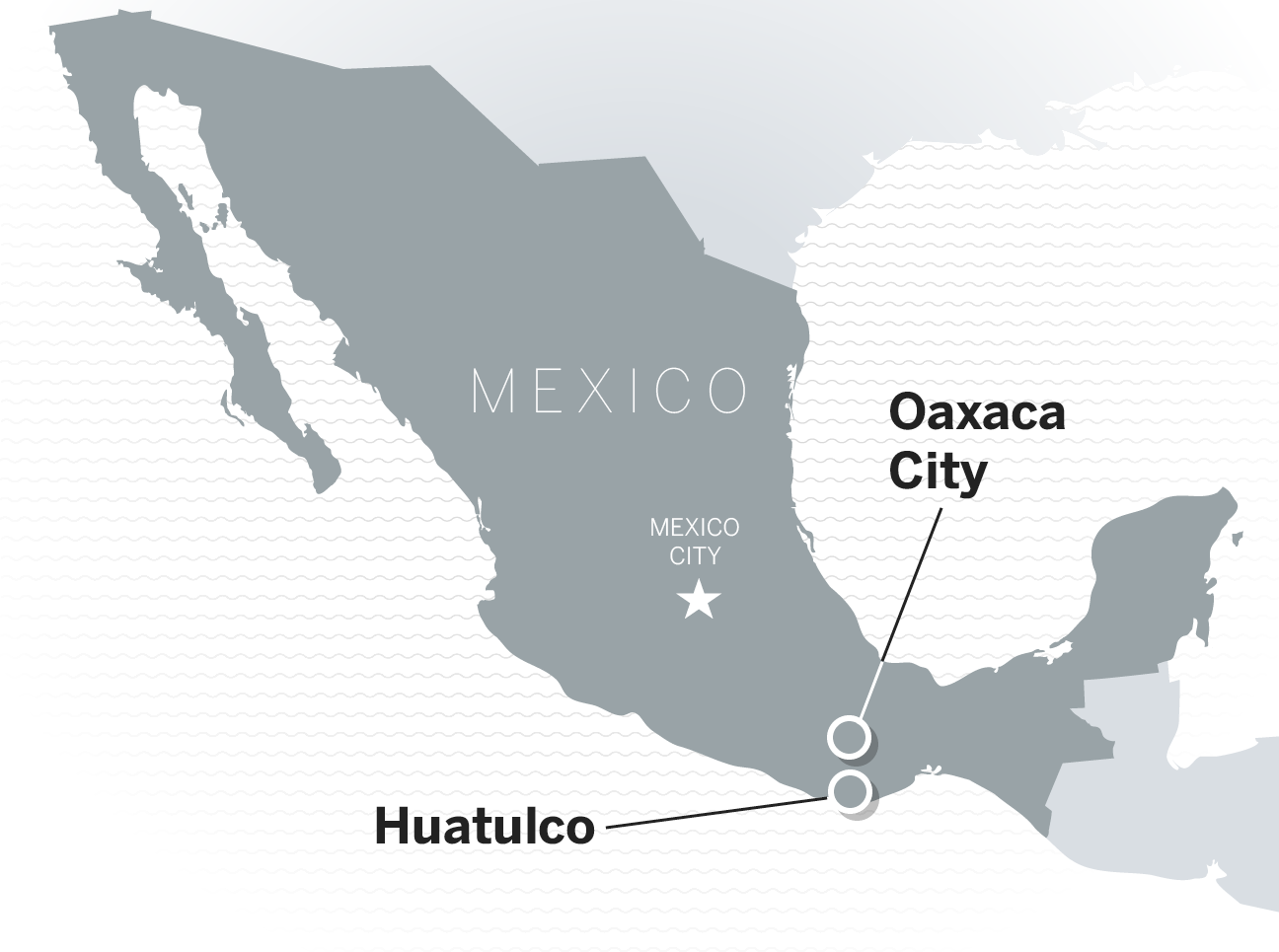 THE ABIM WAS FOUNDED by Zuñiga in 2010 with a single campus in an isolated Triqui community, but in 2014 two locations were added -- a second-tier school in the seaside resort of Huatulco and the A-team's current complex outside of the state capital of Oaxaca City.

After the barefoot boys' success brought international recognition to the academy, Zuñiga was able to expand the program thanks to money he makes from giving lectures and leading workshops as well as government funding. In addition to the 150 boys and girls who live full time at the three campuses, the program has basketball initiatives in many communities that benefit around 1,500 other children.

Zuñiga grew up in Mexico City and played several seasons in Mexico's professional basketball league before retiring to pursue his education. One of his wife's relatives had done volunteer work in the Triqui region, and he wanted to help after hearing about the culture's underage brides, polygamy and the poverty and violence in the area. He lived in the region for a stretch in 2009 and 2010, spending at least a week in each of the 32 Triqui communities.

"It was sad to see the adult's issues affecting the Triqui children, because the children are the future," Zuñiga said. "I realized the only way I could positively affect the situation was to focus on the children, and not the adults."

The region had been dealing with heightened levels of violence. Weeks before Zuñiga's arrival, two human rights activists were murdered while investigating the deaths of two local journalists. The leaders of the region were wary of Zuñiga's intentions.

"They said I was in the secret service, that the government had sent me to spy on them, to study them," he said.

Since the 2013 tournament in Argentina put the A-team on the map, the players have traveled to more than a dozen countries on three continents. They have won tournaments across Mexico, as well as in the United States, Uruguay, Germany, El Salvador and Italy. On June 30, they'll return to Spain to defend the Barcelona Basketball Cup, a tournament they won last year.

When talking to the team members, few mentioned playing in the NBA as a goal, although they're all big fans -- especially of the Spurs. They openly discussed how it would be difficult for any Triqui to make the league because, as they continually joked, they're not a tall people. But don't sell them short, their coach said.

"These kids, they're the leaders that are going to change things in their communities very soon," Zuñiga said.

ALTHOUGH IN RECENT YEARS the violence in the Triqui region has diminished, it hasn't stopped completely.

Bernabe Martinez de Jesus ate breakfast, laughing with his teammates, before class. He showed no signs of sadness, but later, speaking alone, his tone changed.

"A few months ago, Bernabe's father was murdered," Zuñiga said.

"It's sad that he's no longer here," the 15-year-old Bernabe said. "But hopefully he'd be happy with what I'm doing."

Bernabe reflected on his childhood before the ABIM program. He said he usually had one meal a day and meat only once a month. Most days he worked in the fields with his parents, and he hardly ever attended school, which he didn't like. But now he hopes to be a doctor and return to the Triqui region, where medical services are extremely limited.

"This is a great opportunity for me, to finish my studies," he said. "In the region, all the kids, 12, 13 years old, are getting high, drinking alcohol, other things.

"I hope that I can change everything, to fix the ways of my town."

Bernabe and Maximiliano are both from the town of Lazaro Cardenas Copala. It takes five hours to get there from Oaxaca City on winding roads, dodging potholes and stray dogs through the scenic mountain terrain. The town is a smattering of tin-roofed houses and dirt streets, outside of cellphone reception.

Bernabe was raised in a polygamous family with two mothers. His birth mother, Paulina Guzman Garcia, is being cared for at the home of one of his 14 siblings. As she sat in a chair outside looking despondent, her gaze hardly left the ground. She doesn't speak Spanish -- only the native Triqui language -- and she communicated through Guillermo Merino, a coach from the Triqui region and a protégé of Zuñiga's.

She didn't mention her murdered husband or the majority of her children who have immigrated to the United States in search of opportunity. She was unaware that Bernabe wanted to be a doctor and return to the community. She said it seemed like a very good idea; the community needed the help.

Walking across the town, Merino stopped at a house, calling in to a 15-year-old boy who had been kicked out of the academy for misbehaving and failing to maintain his grades. The boy didn't seem to want to engage in a conversation, but eventually he admitted he had no intention to go back to school and instead planned to immigrate illegally to the United States because there was no opportunity in the region.

At Maximiliano's house, his mother fed hens and chickens who roamed the property. Her granddaughter, Maximiliano's niece, played nearby with a toy made from a tin can and a string. Tears came to her eyes as she and Merino spoke for several minutes in Triqui, and she peppered him with questions about her absent son.

She said she missed Maximiliano a lot, but she knew it was better for him to be away studying. She admitted she had trouble properly feeding him and his nine siblings. She hopes one day he'll have a stable job and be able to help the family and the community. She said she didn't worry about her son being in the program; she worried only about the air travel because she had heard stories of planes crashing.

A wooden basketball net no higher than six feet stood outside the house. Maximiliano's mother said the family had to rebuild it many times because the kids dunked on it so much. She agreed to be photographed only if she could go inside first and change into her Huipil -- a traditional Triqui dress.

The town appears to be formed around the elementary school, where in the middle sits a basketball court, as if the court itself was the town's main plaza.

"In the Triqui region, everyone plays basketball," Merino explained. "Every community has a basketball court. We only recently started getting soccer pitches."

WHILE BERNABE AND MAXIMILIANO train and study at the Oaxaca City campus of the ABIM with the A-team, most of the academy's students are at the two other campuses. The B-teams live at the Huatulco facility, while the others are at the original campus in a small town in the Triqui region called Santa Cruz Rio Venado -- 30 minutes from Lazaro Cardenas Copala.

Marcelo Garcia is a member of the government in the Constancia del Rosario municipality, which encompasses the Triqui region. He works as a liaison between the communities and various youth initiatives and explained that the ABIM program has provided important access to education in a region where many never finish their studies.

"We continue to be concerned for the youths," Garcia said, specifically discussing the girls, who often are very young when they start bearing children. "Here, a problem is that they marry at a very early age."

Around 100 boys and girls live and study at the ABIM campus in Rio Venado.

One recent morning, the girls' 13-year-old team piled into the back of a truck to drive 30 minutes into Putla, the municipal capital of the region, for a game against a local middle school. But it was raining by the time they arrived, and the outdoor game was canceled. The girls were undeterred.

Even though the other team was a no-show, the ABIM players jumped onto the court and began scrimmaging, kicking off their shoes to play barefoot. They laughed when they missed shots and cheered when the ball sailed through the hoop. Their smiles were contagious.

"I love basketball," 13-year-old Andrea Medina de Jesus said cheerfully. Andrea is in her third year at the academy. Like many kids in the program, she hopes soon to move to the Oaxaca City campus now that the A-team will soon be studying abroad. But as a Triqui girl, she knows that could be difficult.

"I have to ask my parents if I can continue to study and play basketball," she said. "I'm the first woman in my family ever to study."

She also hopes to be the first woman in her family to have a career -- she wants to be a lawyer. Basketball has given her the opportunity to continue her studies; she can only hope her traditional parents are understanding and allow her to stay on the path.