Kyrie Irving is ready to end his run with the Cleveland Cavaliers, as league sources told ESPN that the point guard has asked the team to trade him.

The request came last week and was made to Cavaliers owner Dan Gilbert. Irving has said that he wants to play in a situation where he can be more of a focal point and that he no longer wants to play alongside LeBron James, sources said.

The Knicks have strong interest in acquiring Irving via trade, but as of Friday night, they were not willing to include Kristaps Porzingis in any potential deal, league sources told ESPN. The Knicks, sources said, would consider including Carmelo Anthony and future first-round picks in a package for the All-Star point guard. The Cavaliers' interest in such a package is unclear.

Irving's agent, Jeff Wechsler, would not confirm or deny whether the point guard asked for a trade.

"Kyrie and I had a meeting with Cavs leadership where we discussed many different scenarios in reference to Kyrie and his future with the team," Wechsler told ESPN. "The basis of those discussions and what went on in those discussions are between the Cavs and us. We are respectfully going to keep those private."

Sources told ESPN the Cavaliers were disturbed that Irving's request was made public, believing it could affect his trade value.

The Cavaliers parted with general manager David Griffin last month after they couldn't come to an agreement on a contract extension. Cleveland has yet to name Griffin's replacement -- sources told ESPN that promoting assistant general manager Koby Altman to GM is imminent -- and James, the franchise centerpiece, has reportedly expressed concern about the team's direction. 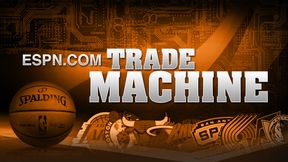 Want to speculate where Kyrie Irving could land? Swing a deal for your favorite franchise. Trade Machine

Informed of Irving's request, James was blindsided and disappointed, sources said. Irving did talk about the meeting with several other teammates, a league source told ESPN.

News of the request comes days after Irving told Sports Illustrated that the Cavaliers are in a "very peculiar" place this offseason.

"We just have to, you know, make sure that all our pieces are aligned first, and then we go from there," Irving told the magazine. "It's the summertime, a lot of craziness going on in the NBA."

League sources told ESPN that both Butler and Karl-Anthony Towns have been doing their part to recruit Irving on the idea of playing alongside them in Minnesota, and they've made it known to Wolves management that they want to add the Cavs star to the mix. Butler and Irving became tight in their time playing for USA Basketball together. Towns' father, Karl Towns Sr., and Irving's father, Drederick Irving, are connected through the basketball scene in northern New Jersey, where they both reside.

A Minnesota-Cleveland swap would almost assuredly involve Jeff Teague, who cannot be traded until Dec. 15, per league rules, after signing a free-agent contract with the Wolves this summer.

Irving, 25, has been with the Cavaliers since they made him the No. 1 overall pick in the 2011 draft. After Irving and the Cavs plodded through three losing seasons, their fortunes changed when James returned. James, Irving and Kevin Love -- the Cavs' Big Three -- have led Cleveland to the past three NBA Finals, winning the title in 2016.

Love appeared to allude to Irving's request in a tweet Friday, saying, "Things are a little peculiar."

Life is amazing. No complaints. Things are a little peculiar. But no complaints. Now go kick some rocks 🙌🏼 https://t.co/Tz62YyGeYt

Irving's situation is complex for the Cavs, as James can be a free agent next summer. Irving has three years and $60 million left on his contract, but he can opt out of the final year before the 2019-20 season.

If Irving is traded, he will give up the chance to qualify for and sign a supermax contract with the Cavs in 2019. This provision, installed in the just-started collective bargaining agreement, was meant to deter star players from leaving their teams after their eighth or ninth season, when they're typically signing their third contract. This is when numerous stars want to move, as has played out with Kevin Durant, Gordon Hayward and Paul George.

After winning the Eastern Conference title in May, Irving described his closeness with James and how staying together can benefit them.

"When you get to that level of trust and you allow someone to come into a friendship that extends well off the court," Irving said, "and you understand how great this era can be if we are selfless to the point where we don't think about anything else except for the greatness of our team and what we can accomplish."

Irving had a good relationship with Griffin, who was a point man in selling Irving on a five-year contract extension in 2014 even though the team was coming off four consecutive losing seasons.

Griffin understood that Irving's desires for his career had to be managed, and he worked regularly to challenge Irving and, at times, soothe him. Coach Tyronn Lue is also a strong supporter of Irving and has been a strong defender when Irving's game -- which is sometimes more shoot-first than pass-first for a point guard -- has come under criticism.

When Irving signed his deal, he expected to be the franchise player for the foreseeable future. But about two weeks later, James arrived from Miami. The sudden change of situation rocked Irving, and he has vacillated at times over the past three years about working as a secondary star to James and the original plan of having his own team.

He discussed the challenge during last month's NBA Finals.

"Having just a tremendously great player like that come to your team, and you see yourself being one of those great players eventually, and then he ends up joining it, and then now you have to almost take a step back and observe," Irving said. "Finding that balance is one of the toughest things to do because you have so much belief and confidence in yourself. ... Selfishly, I always wanted to just show everyone in the whole entire world exactly who I was every single time."

With this in mind, Irving considered requesting a trade after the Cavs' championship last year but decided against it, sources said.

The Cavs did not make Irving untouchable in trade talks in late June and early July, multiple sources told ESPN. Cleveland was not inserting him into deals but listened when teams inquired about him. None of those trade proposals became serious enough to the point that Irving's representatives were contacted to sign off on the potential swap, sources told ESPN.

Irving, a four-time All-Star, has averaged 21.6 points and 5.6 assists per game for his career. Last season, he averaged a career-high 25.2 points plus 5.8 assists per game while shooting 40.1 percent on 3-pointers.