If Game 4 of the 2017 NBA Finals turns out to be Kyrie Irving's last game in the city of Cleveland playing for the Cavaliers -- after LeBron James' return, you can't rule anything out, after all -- it will be a tantalizing reminder of just what the Cleveland Cavaliers said goodbye to when they traded Irving to the Boston Celtics on Tuesday. 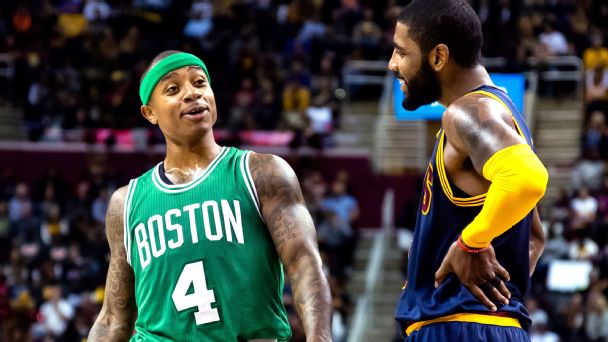 With the Golden State Warriors up 3-0 in the series and lusting for a sweep, Irving was spectacular, dropping 40 points in 41 minutes, hitting 7-for-12 from deep, adding seven rebounds and four assists and thoroughly outplaying back-to-back MVP Stephen Curry, who went 4-for-13 from the field while totaling just 14 points.

It is that Irving -- the free-wheeling, dizzy-dribbling, sharp-shooting, skilled supernova of a talent -- the franchise couldn't shake as it went through the process of trying to trade the 25-year-old it saw grow into a budding superstar since it drafted him as a teenager with the No. 1 pick in 2011.

The deal settled upon, nearly a month to the day after Koby Altman was named the team's general manager, satisfied Cleveland's short- and long-term goals of staying a championship contender in the now while saving for a rainy day in the future, which could come pouring down in the summer of 2018 should James leave as a free agent.

Out goes Irving, and in comes Isaiah Thomas -- three years older and 6 inches shorter than Irving, to be sure. Yet Thomas is coming off his finest season as a pro, in which he averaged 28.9 points and 5.9 assists on 37.9 percent shooting from 3-point territory (all in line with Irving's averages) while attempting nearly twice as many free throws per game than the guy picked 59 slots ahead of him back in 2011 (8.5 for Thomas; 4.6 for Irving).

Along with Thomas there is Jae Crowder, a rugged, 6-foot-6, 235-pound wing unafraid of mixing it up (anyone remember his 2015 playoff series against the Cavs?) while still providing a dimension on the offensive end (he shot 39.8 percent on 3s during the regular season last season). As James faced the prospect of entering Year No. 15 of his illustrious career next season with the 37-year-old Richard Jefferson and the steadily declining Jeff Green as his primary backups, Crowder's addition cannot be overlooked.

Also not to be overlooked is Ante Zizic, a 20-year-old 7-footer who, one would hope, can help the Cavs from again going through backup centers like they're scrolling through Netflix titles, as they did in 2016-17.

Of course, the jewel of the trade, in the Cavs' eyes, is the Brooklyn Nets' 2018 first round pick -- unprotected. If the Nets stink up the joint next season, Cleveland could end up with yet another No. 1 pick to use either to entice James to stay or to become the focal point of a franchise reset if James finds somewhere new.

"Just felt right," one front-office source told ESPN when asked what led the Cavaliers to settle on a deal with the team they beat in the conference finals just months ago after fielding phone calls about Irving from just about every team in the league.

Just how right the trade ends up being will come down to how poorly the Nets play and just how well Thomas' hip heals. It got so bad for him playing on a torn labrum that he had to miss the final three games of the Cavs-Celtics series, ending his season early. Although the 2018 NBA draft figures to be deep, there is a big difference between picking 1-3, where the likes of Michael Porter and Marvin Bagley figure to be on the board, and picking 4-6, where it will be more of a mixed bag(ley).

As the Cavs sat on Irving's trade request for more than six weeks, the stalemate led some around the league to wonder if Cleveland were willing to enter into the 2017-18 season with the point guard still on the roster, hoping to mend fences. After all, one of Irving's mentors, Kobe Bryant, requested a trade in the summer of 2007, only to remain with the Los Angeles Lakers and tack on two more championships and three more NBA Finals appearances. Multiple Cavs players told ESPN that they hoped Irving would remain on the team, believing they could work out their differences like a family and have another crack at beating the Warriors together.

In recent weeks, that idea became unrealistic, as Irving let it be known that he would rather not report to training camp than begin another season with Cleveland, sources told ESPN.

The delay, it turns out, was fueled by Cavs owner Dan Gilbert's preference to land a "big-name guy" -- which Thomas is -- and the reality that the Celtics, with president Danny Ainge's war chest full of assets, could offer more than any other realistic trade partner, sources told ESPN.

There are some sour grapes on Cleveland's end of things, of course. Not necessarily from James, who tweeted out a glowing tribute to Irving. He will be "ready at training camp no matter what," according to a source close to James. But there are others who wonder if Irving bit off more than he could chew.

"I was hoping Ky was going to get to lead a team," one Cavs player told ESPN. "See what it's like to have the entire franchise on his back."

However, it would be short-sighted to simply portray Irving as the villain here. His 3-pointer in the final minute of Game 7 of the 2016 Finals will be forever frozen in time as the dagger that eviscerated a half-century-long championship drought in Cleveland. And on his way out the door, he waived his 15 percent trade kicker -- worth approximately $5.8 million -- in order to facilitate the deal, so to peg this as a greedy move by Irving wouldn't be painting the whole picture.

The side that had the most to gain financially was the Cavs, who cut down on their projected luxury tax bill by nearly $30 million for next season by shipping out Irving (owed $18.9 million) for Thomas ($6.3 million), Crowder ($6.8 million) and Zizic ($1.6 million).

If Thomas isn't ready to go by opening night, Cleveland has another new point guard with an All-Star past on its roster in Derrick Rose, who will be jumping at the chance to start in Thomas' place. As much as the Cavs would have preferred to have a long-term commitment from James as they entered this crucial offseason, two of the key pieces they have added around him, in Rose and now Thomas, actually fit into the high level of urgency surrounding James' pending free agency.

James might need next season to leave a positive impression on Cleveland, should he decide to finish his career elsewhere, but Rose and Thomas -- both in contract years and looking to get paid -- need the season just as much to show that they still deserve premium compensation in this league.

The winner of the trade won't really reveal itself until the Celtics find out if Irving will indeed sign an extension in Boston in a couple of seasons and until the Cavs find out if Thomas can return to form and how that Brooklyn pick plays out.

But there will be a teaser while we wait for all of those dominoes to fall: The Cavs host the Celtics on Oct. 17, opening night of the 2017-18 season.

Irving will be back in Quicken Loans Arena, trying to punish the Cavs the same way he punished the Warriors back in Game 4.