Kevin Durant had been gone for a couple of weeks, off to the Bay, leaving the Oklahoma City Thunder nothing but a bit of cap space, and Sam Presti walked into the Thunder offices with a box of baseballs. Each one had the team's logo on it.

He passed them out to staff to keep in their offices. The message was clear: Keep your eye on the ball. 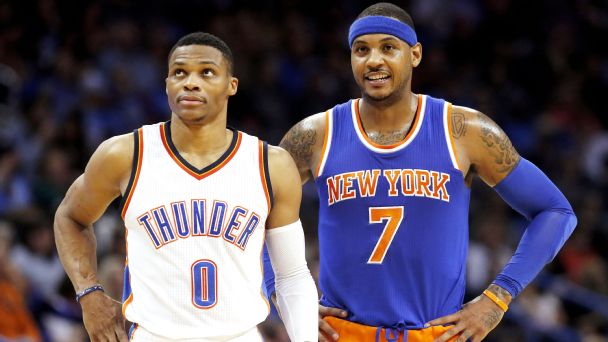 For the Thunder, of course there's still temptation to glance in the rearview mirror from time to time and ponder the events of last July. It rattled the franchise to its core. It presented a crossroads. But bring it up to anyone around the organization and they talk about it like ancient history. Nothing but a bullet point on the bigger timeline. Even as they stood by and watched as Durant sent two third-person tweets last week slamming his former coach, roster and organization, they didn't flinch. Presti instead, once again, thanked Durant for his time in OKC. Around the Thunder, the obsession of the what and why of Durant's departure persists, Durant himself clearly not over it, but only on the outside. Presti and the Thunder moved on long ago.

With a trade complete that brings 10-time All-Star Carmelo Anthony to Oklahoma City and sends Enes Kanter, Doug McDermott and a second-round pick to New York, it's a straightforward narrative to look at where the Thunder were and where they are now. A rise-from-the-ashes kind of thing. The organization resists the comeback angle, though. Because that gives credence to the idea that they went anywhere at all.

At the heart of this was Russell Westbrook's decision to plant his flag in OKC by signing an extension last summer. Without that, there's no Paul George trade in June, and no Anthony trade on Saturday. And Westbrook's future remains the final carrot in what has been a blockbuster offseason in OKC, with a $207 million supermax extension hanging in the wind for the reigning MVP to sign. With a deadline of Oct. 16 to get it done, the Thunder open training camp next week waiting for an answer. But that resolution could come sooner than later, and should Westbrook take the deal, the Thunder will take what's been a remarkable run of sustained success and transition it into a whole new era.

Of course, George can hit free agency next summer, and the whispers about his affinity for Los Angeles aren't going anywhere. And Anthony has a player option he can turn down to jump on the market, as well. But if their main desire is to team up with fellow stars and stare down the beast in the Bay, they already have exactly that, spearheaded by the MVP of the league. And it happens to be in Oklahoma City, of all places. Probably not ideal, but assembling something much better somewhere in free agency next summer won't be easy.

What all of this required was a resolute confidence from Presti to carry on, as he said in his news conference after Durant left, as well as commitment from Clay Bennett and OKC's ownership. Per ESPN's Bobby Marks, the Thunder's payroll could hit as much as $157 million next year. And next summer, Bennett will be looking at a luxury-tax bill nearing $30 million. But with Westbrook hitting his prime, Bennett is willing to provide the support to strike while the iron is hot and restock a contender in OKC.

(And before you bring it up: Why is Bennett going deep into his pockets now, for a 33-year-old Anthony instead of spending big to keep James Harden in 2012? A fair question, and one that still doesn't have the most satisfying answer. But from the Thunder's perspective, Bennett was willing to go deep into his pockets for Harden then -- don't forget, a $55 million extension was on the table that Harden turned down. That would've sent OKC deep into the tax then, as well. The front office and ownership were fearful of the dreaded repeater tax, which the Thunder would've struck right as Durant, Westbrook, Serge Ibaka and Harden were coming up for their third contracts, as well as when they were hitting the primes of their careers. As one of the smallest markets in professional sports, the reality is that money isn't endless, and they had to plan and project their future. So they saved and eyed this window as the time to spend. They just always figured it would be in supporting a roster led by Westbrook and Durant.)

The Thunder are about to embark on their 10th season in Oklahoma City, and the past decade has been a whirl of ups, downs, trades, injuries and departures. But most of all, it has been about fulfilling the message that Presti opened his very first news conference with when he became the league's youngest executive ever: sustained success. The Thunder have the second-best record in the NBA since they moved to OKC. They have layered seasons, players and eras to continue churning out teams built to compete. Trips to the playoffs, trips to the conference finals, a trip to the Finals.

But they're missing the hardware that validates it all. Presti knows it. Bennett, too. They never took their eyes off it, and a year after it nearly came apart, they're right back to going for it all again.