As part of a recent extension with Michael Jordan, Gatorade and the Jordan brand are unveiling a "Be Like Mike" collection.

The collection will feature four different Gatorade Jordans, two of which will be sold starting Dec. 16.

"Last holiday season, the Air Jordan guys did 'Space Jam,' so we proposed this in a way to authentically engage and inspire athletes and enthusiasts," said Jeff Kearney, head of sports marketing for Gatorade. 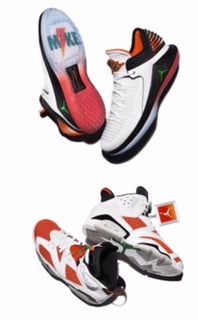 The Air Jordan XXXII "Like Mike" will feature "Mike" with the brand's familiar lightning bolt taking the place of the "I" on the outsole, with some of the words to the famous 1991 "Like Mike" commercial stitched on the inner tongue ($160).

The Air Jordan VI "Like Mike" is a nod to the shoe he wore in the commercial but in Gatorade's orange and green colors and a lace lock in the shape of a Gatorade bottle ($190).

A Gatorade Jordan I and an additional Jordan VI, which is being kept under wraps, will be revealed and hit stores later in December.

"Bringing 'Be Like Mike' to life through this collection allows us to connect an iconic story to a new generation of Jordan consumers," said Brian O'Connor, vice president of marketing for the Jordan brand.

Already on the market, at retailers like Eastbay, is a whole apparel collection -- Jordan gear in Gatorade colors with the lightning bolt, including T-shirts, hoodies, hats and socks.

Kearney said the "Be Like Mike" campaign will extend to 7-Eleven, which will is partnering with Gatorade on retro glass bottles.

Additional items will be for sale on Gatorade's and Nike's websites.

Gatorade abandoned five trademarks to "Be Like Mike" in recent years but recently filed for two more this year to protect the phrase on the new merchandise.