Which NBA teams and players are making the biggest early impressions? Who will be in the Los Angeles Lakers' best five-man lineup?

Our NBA experts answer the big questions as the regular season approaches.

1. What are you watching most closely in the preseason?

Jackie MacMullan, ESPN: I reserve the right to chronicle every single movement from Kawhi Leonard until Tony Parker retires or Gregg Popovich shaves his beard -- whichever comes first. Leonard has been an enigmatic ghost for so long that every nugget is a meaningful one. What do we make of his strange new hiccupy chortle? I don't know. But I sure did love Kawhi drilling that sweet step-back jumper over Caleb Swanigan the other night against Portland.

Brian Windhorst, ESPN: The calendar, to count down days to the regular season. Well, that and the rookies. The amazing thing about the draft is that no one has figured it out yet. There is still genuine mystery as to how almost all of these guys will play.

Chris Herring, FiveThirtyEight: I think we've all been curious to see how LeBron looks alongside the Lakers' youth. In particular, given the slower pace that James' recent teams have played at (even though they rated well in advanced transition scoring stats), would this club get up and down much? The answer has been an emphatic yes so far, with the Lakers averaging almost 25 fast-break points per game, the league's fourth-best rate so far.

Royce Young, ESPN: There are probably a lot of things that are far more interesting than this -- LeBron is on the Lakers now, have you heard? -- but I'm very curious to watch how some of the rule changes and applications work. The 14-second shot clock after an offensive rebound is a pretty interesting dynamic, but I'm especially eyeing the off-ball holding emphasis. That could have a significant impact on the game, and how teams run their offensive and defensive schemes.

Kevin Pelton, ESPN: The health of players coming back from injuries is probably the best thing you can take from the preseason, so it's good to see Kawhi Leonard and Gordon Hayward back on the court and looking healthy. Hayward's shooting has looked rusty, but he's moving around and getting to the basket like normal.

2. Which player or team has made the biggest impression so far?

Windhorst: Well, Miles Bridges was pretty darn impressive in his first game. It's really not worth making any assumptions yet, but that was a pleasant surprise.

Young: Is it a total cop-out to say Kawhi Leonard, just because it was awesome to actually see him on a basketball court again? And not just that, but it was a solid reminder of what kind of player he is. The same old stuff was there: the right-to-left crossover into a pull-up jumper, the strong downhill attacks and suffocating on-ball defense.

Pelton: Markelle Fultz, by doing something he never did as a rookie in the preseason, regular season or playoffs: making a 3-pointer. Fultz has been starting with the Sixers' other young stars, and if he can credibly space the floor, that could be Philadelphia's lineup for years to come.

MacMullan: Am I cheating by taking the easy way out and saying Luka Doncic? Too bad. That's my answer. His debut was a cornucopia of wonderful moments that included tough shots, adept ballhandling (did you see that behind-the-back crossover?) and old-fashioned baller instincts. I know, I know -- the Mavs played a team from China, but this kid is intriguing, talented, charismatic and fun.

Herring: Markelle Fultz's willingness to take jumpers -- including 3-pointers from the corner -- seems like a big step. We know Fultz has immense talent, but if he regains his jumper over time, it will force us all to give the Sixers even more validity in the race for the Eastern Conference crown. Brett Brown largely sat Fultz during the playoffs last season, instead going with T.J. McConnell. If he becomes a key rotation piece this coming postseason, that would illustrate that he has gotten back on track for one of the most important clubs in the league.

3. What will be the Lakers' best five-man lineup?

Young: Rajon Rondo, Lonzo Ball, Brandon Ingram, LeBron James and Kyle Kuzma. It might be tough for the Lakers to go super small, with a heavy ask on Kuzma and Ingram to play big, but the Lakers could have their own version of a death lineup available. There are a lot of combinations to play with, and figuring out how to fill the 5 spot without a center could be challenging. Still, that five could prove explosive with a lot of ballhandling and dynamic playmakers, along with athletic, switchy defenders. 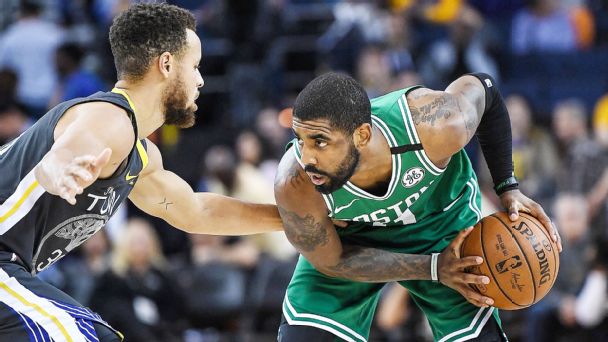 MacMullan: I actually like the idea of a Lakers "death lineup" with LeBron at the 5, even though he resisted that in Cleveland. Honestly, as long as Ingram and Kuzma are out there, I'm good with whoever else the Lakers roll out. But for argument's sake, give me Kentavious Caldwell-Pope, who is the kind of role-player veteran LeBron gravitates toward, and Rondo, who facilitates superstars better than any non-shooting point guard I know.

Herring: Ball, Josh Hart, Ingram, LeBron and Kuzma. Luke Walton has talked about playing Kuzma -- not exactly the greatest defender in the world -- at center, which may occasionally falter. But that five-man group will pack some firepower on offense, with two primary ball handlers who aren't afraid to run and a couple of good jump-shooters. With some solid perimeter defenders, the lineup should hold up fine on that end, too. If need be, LeBron can play center for brief stretches, allowing Kuzma to play his natural power forward spot on defense instead.

Pelton: Ball, Caldwell-Pope, Ingram, LeBron and JaVale McGee. With apologies to Rajon Rondo, I think Ball will likely be the better fit alongside two other capable ball handlers, and Josh Hart's 3-and-D game narrowly loses out to the other wings. As intrigued as I am by LeBron playing the 5, I think it's likely the Lakers will still be more effective overall with McGee in that spot, meaning no room for Kyle Kuzma in the best five.

Windhorst: LeBron, Kuzma, Ingram, KCP and Rondo. But there are a few problems. No. 1: There's no center, which is going to be a problem against quite a few Western Conference teams. No. 2: When games are on the line, not only does LeBron not like to play center but he also prefers playing point guard, which could neutralize Rondo because teams will play off him. This is a long way of saying I think it's going to be hard to play their best lineup when games matter.

4. What's your take on the Jimmy Butler situation in Minnesota?

Herring: Stuff will get awkward for everyone involved if they don't trade him very soon. A player of his caliber is almost certain to tilt his next team's possessions and offense in a much different direction from before, and it's very late in the game for that to be the case. The Carmelo Anthony trade to Oklahoma City was obviously far different, given Melo's diminished standing in the game now. In hindsight, that deal coming together right as camp began hurt OKC's ability to jell and Anthony's ability to accept the role he needed to take. Time is of the essence for Butler and his next team.

MacMullan: I used to think Jimmy Butler was one of those old-school, defensive-minded pit bulls who brought toughness and professionalism to any roster he inhabited. I wanted him on my team. Now I think he's one of these new-age stars who somehow believes he is LeBron James and has the gravitas to pull the strings for whichever franchise he inhabits. Note to Butler: You are not LeBron James. And your reputation is taking a pretty big hit right now.

Windhorst: The trade demand was mistimed, and it has caused him to lose leverage he could've created had he done it earlier or later. He had his reasons for doing it now but it doesn't seemed to have worked. He's going to get paid next summer. He's a highly desired player in a flush market. In the end, he'll be fine. As for Tom Thibodeau, he knows if he doesn't have a good year, he's probably going to get fired. And if he trades Butler in a deal that makes his team weaker, he's probably not going to have a good year. When you look at it like that, it easy to see why it's gone this way.

Young: The Wolves should keep the asking price high and just keep waiting. Other than the distraction and mess of everything, they don't have to rush into a deal for the sake of it. The team doesn't have that much leverage, but Minnesota can manufacture some by keeping Butler's value at a premium. The Wolves gave up a healthy amount to get him, and if their only return is one season and pennies on the dollar, it could be a significant setback for a franchise that was headed in a very positive direction only two seasons ago.

5. Which team do you think is being overrated or underrated?

MacMullan: It feels as though we should be talking about the Milwaukee Bucks a little bit more. Aside from the obvious, which is that Giannis Antetokounmpo may have the most unlimited ceiling of any player in the league, there's a chance Thon Maker could make a big jump this season. I'm a big Mike Budenholzer fan, and you can bet the Bucks won't be 19th in defensive efficiency this season. In fact, mark the Greek Freak down as a potential Defensive Player of the Year candidate after not even making either All-Defense team in 2017-18.

Windhorst: The Nuggets have looked pretty good against the Lakers. They have young guys maturing together, a lot of continuity and most of them are paid now. They're primed. Oh, and I think Nikola Jokic will look forward to matchups with JaVale McGee.

Herring: They haven't shown it yet in this young preseason, but I think last year's horrible season has people forgetting how capable a number of players in Memphis are. With good health, and without the drama last year brought, the Grizzlies could sneak into the playoffs -- even in a loaded West. They've quietly added a handful of two-way players this summer who figure to help in that effort. Even if it isn't enough to reach the postseason, they'll be vastly improved from last year and won't be a fun opponent for other clubs.

Young: Cleveland might not be that terrible. It's hard to recover from LeBron leaving, obviously, but the Cavs are in a much stronger position this time around than in 2010. There's some belief Kevin Love can reactivate his top-level form and some of those thought-to-be good role players who didn't produce that well playing with LeBron could provide decent depth. They aren't the team to beat, as Tristan Thompson so outrageously claimed, but maybe the playoffs aren't such a long shot.

Pelton: I think most people are putting the Denver Nuggets in the category of fringe playoff teams in the West after they fell one win short of the postseason in 2017-18. That was despite Paul Millsap playing just 38 games, however, and the Nuggets' young core also should improve this season. Preseason returns have been encouraging, with reserves Monte Morris and Juan Hernangomez performing well in the larger roles they'll need to play. So I give Denver a chance to compete for home-court advantage.