In the final seconds of the fourth quarter of an unexpectedly close game against the cellar-dwelling Phoenix Suns, an unlikely member of the Toronto Raptors found himself with the ball in his hands.

Yet, as the clock ticked away in regulation, Raptors coach Nick Nurse trusted Pascal Siakam enough to put the ball in his hands. Siakam proved him right, too, first slicing past Suns forward Mikal Bridges before flipping the ball over the outstretched arms of center Deandre Ayton and into the hoop, giving the Raptors a 111-109 victory.

If there is a single moment that encapsulates the growth Siakam has undergone -- both through his first 2½ seasons in the NBA and specifically this year -- it was this one. It is that growth that explains why Siakam has a chance of hearing his name called Thursday night as a reserve for the 2019 NBA All-Star Game before the Raptors face off against the Milwaukee Bucks in a battle for Eastern Conference supremacy, and why he could be the key to deciding whether Toronto ultimately emerges from the East this spring.

"I don't really set goals like that," Siakam told ESPN. "For me, I don't put a cap on what I can accomplish, right? I just work and continue to do whatever I can do to get to the highest level I can get.

Whether he does or not, Siakam's rapid improvement throughout his NBA career has put him on a trajectory that few, if any, saw coming when he was taken with the 27th pick in the 2016 NBA draft out of New Mexico State.

After spending his rookie season as a bit player, getting token starts in 38 games while largely functioning as an energy guy teams left alone on offense, Siakam emerged into the fulcrum of Toronto's dominant bench unit last year. This season he took yet another step, becoming a full-time starter and a deserving third-in-command behind Kawhi Leonard and Kyle Lowry in Toronto's pecking order.

At every stop along the way, Siakam's success was far from expected. But through it all, the same confidence that kept him from placing limits on himself is what allowed him to develop into a player who is now routinely considered to be among the elite up-and-coming young talents in the sport.

"Just his confidence to go and do it," Nurse said, when asked what has stood out most about Siakam since he arrived in Toronto. "He was just a hard-playing dude. Then he got some skills, then we got him in the open floor, then he worked on his at-the-rim game, then his shooting ... he has put most of that together now." 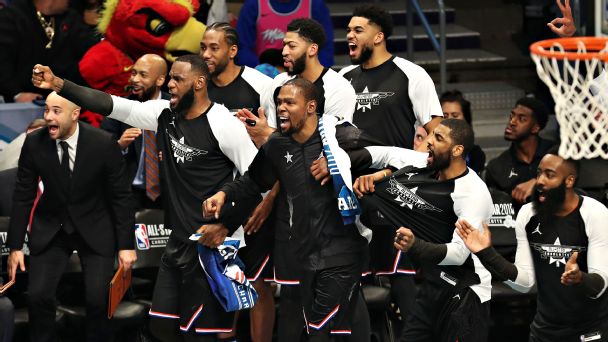 The result is a player with a skill set few others can replicate. What immediately stands out is his combination of speed, length and athleticism, which allows him to make highlight plays at both ends of the court. Initially, those plays were mainly limited to the defensive end, where even in his earliest days Siakam showed flashes of potential.

But the more dramatic gains -- the ones that have Siakam in the driver's seat to win this season's Most Improved Player award -- have come at the offensive end, where Siakam has slowly expanded his game to become capable of attacking defenses in multiple ways. His scoring numbers have increased dramatically, as he's now averaging 15.2 points per game -- more than double what he did a year ago.

In concert with that rise is his improved shooting ability; after taking only seven 3-pointers as a rookie, then making 22 percent of his attempts last season, Siakam is now up to 32 percent on 3s this year -- not enough to be considered a threat but at least enough that defenses have to pay attention. And after shooting in the 60s at the foul line his first two seasons, he's shooting much better (79.9 percent) and getting there more often -- he's already made more free throws (135) this season than he attempted in his first two seasons combined (119).

The more eye-popping part of Siakam's game, though, is when he picks up the ball and takes off in transition. With his long limbs and herky-jerky style, Siakam presents Toronto with another option to try to rush the ball up the court on the break -- or just to allow Lowry or Leonard a chance to work off the ball instead.

It's a process Nurse said the Raptors identified and slowly incorporated into Siakam's game -- and, in doing so, showed his teammates he could be trusted to handle it. More than anything, though, it showed Siakam that his coaches had the faith in him to grow and expand his game -- and that, in turn, gave him the confidence to do it.

"It's great," Siakam said. "They've done a great job of letting me be me, and playing my game and being the type of player I am and using all of my strengths and giving me a position out there on the floor to do what I do best.

Together, the combination of skills -- defensive versatility, length, athleticism, ballhandling and passing -- have led to comparisons to Golden State Warriors star Draymond Green. The Raptors have even experimented with some lineups with Siakam at center -- Toronto's own potential version of Golden State's vaunted Death Lineup.

Like most comparisons, it isn't perfect. Green is much thicker than Siakam, which allows Green to be sturdier while bodying up bigger defenders in the post. Siakam, listed at 6-foot-9 and 230 pounds, isn't quite big enough to handle the game's best centers for extended periods in the paint. Siakam still isn't the same playmaker and passer Green is, either.

But he does, like Green, allow the Raptors to play in a variety of ways and styles at both ends. And he is, like Green on the pre-Kevin Durant Warriors, potentially emerging as the third star necessary for a team to truly be a championship contender in today's NBA. Siakam also, if he stays on this path, will undoubtedly be used by the Raptors as a selling point to Leonard this summer in free agency as a main reason to consider staying north of the border.

For now, though, Nurse and the Raptors are content to simply watch him grow.

"He has exceeded what I thought he could do at this point," Nurse said. "I thought it was coming, but it got here quick.

"He is still growing, and will continue to do so."