LOS ANGELES -- All NBA coaches, no matter what philosophies they profess or principles they follow, are united in one way: They can never have enough players. No matter how talented their teams may be, all coaches constantly clamor for more -- whether they need them or not.

Philadelphia 76ers coach Brett Brown is no different. For weeks now, as the NBA trade deadline has drawn closer, Brown has extolled the need for added depth to the 76ers' roster in the wake of the Jimmy Butler trade two months ago.

What is different, though, is that Brown's argument has merit. While the top of Philadelphia's roster is loaded with stars -- Butler, Joel Embiid, Ben Simmons, plus an elite shooter in JJ Redick -- there are myriad questions after that.

"We feel great," Brown said Tuesday, before his 76ers beat the Lakers at Staples Center. "No matter what happens, we feel good about our base. I think what we all recognize is there's a belief that we need more. It doesn't diminish how excited we are about what we have and what we are growing. But we feel that our time is now.

"To better achieve now, depth is the Holy Grail."

It's hard to argue with Brown's assessment if the 76ers truly do feel that good about their core going forward. If they do, the team's front office, led by general manager Elton Brand, should be willing to do what it takes to bolster the roster between now and the Feb. 7 trade deadline.

If they don't? Well, perhaps they won't be quite as willing to part with any assets to add to what they have. It's what makes the 76ers the most interesting team in the NBA -- non-New Orleans Pelicans division -- leading up to the deadline. Which direction they choose to go -- adding talent or standing pat -- not only will affect how far they go this season but also will inform how they feel about where they are going beyond this year.

There are several things -- from lineup combinations to more subtle adjustments, such as playing Butler at point guard -- that Brown can tinker with as he explores the best ways to make his team work together.

No adjustment, however, will make up for the fact that, as constituted, the 76ers are a few players short when measured against their competition atop the Eastern Conference.

To that end: Philadelphia's starting five -- Simmons, Redick, Butler, Embiid and Wilson Chandler -- is outscoring opponents by 11.8 points per 100 possessions, according to NBA.com tracking, a more-than-respectable number. The lack of depth around them, however, complicates Brown's plans. Nothing illustrates that fact more than Corey Brewer, currently on his second 10-day contract, immediately turning himself into a reliable member of Brown's rotation despite being out of the league until two weeks ago.

Brewer's arrival and ascension highlight the biggest issue this team has: a lack of credible options at both small forward and power forward behind Butler and Chandler. The 76ers tried Furkan Korkmaz as Butler's backup for a while, but his weaknesses as a defender are more damaging than his shooting is helpful.

Meanwhile, behind Chandler -- who, with a lengthy injury history, requires depth behind him -- the 76ers have attempted to shoehorn backup center Mike Muscala into power forward minutes. Muscala is a fine shooter for a big man, but he's a defensive liability at center, let alone at power forward, where he lacks the quickness to stay with most players at that spot in a league that continues to go ever smaller.

A similar description can be applied to the team's biggest surprise this season: rookie guard Landry Shamet. Taken with the No. 26 pick in last June's draft, Shamet has been a revelation, hitting more 3-pointers (93) than any 2018 draftee not named Luka Doncic (114) while leading all of them in 3-point shooting percentage (.404). Shamet has supplied much of what the 76ers lost when Marco Belinelli re-signed with the San Antonio Spurs last summer.

NBA Trade Machine: You be the GM 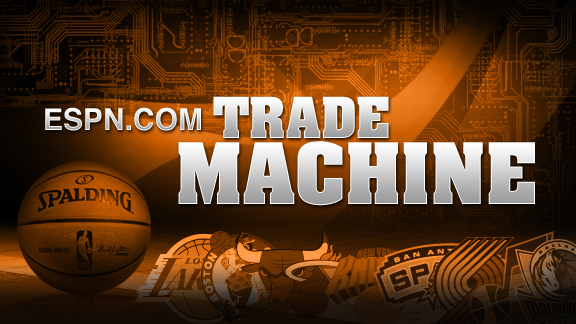 Could your team land a superstar? Enter the teams and players into our Trade Machine, and we'll tell you if it works.

What none of them provides, though, is athleticism and defense -- two things Philadelphia will need, particularly on the wing, to combat teams such as the Toronto Raptors, Milwaukee Bucks and Boston Celtics in the second round of the playoffs and beyond.

If Philadelphia chooses to upgrade the roster over the next nine days, pursuing both of those things to supplement its starters will be at the top of the agenda. Atlanta Hawks big man Dewayne Dedmon has drawn the 76ers' interest, sources tell ESPN. He would bring athleticism and defense, along with shooting.

But to get him, the 76ers would likely have to do something they have so far been resistant to, per sources: trading 2017 No. 1 pick Markelle Fultz.

Fultz, who was with the team Tuesday night, remains out indefinitely rehabilitating his shoulder after being diagnosed with thoracic outlet syndrome last month, and he doesn't appear anywhere close to a return to the court. His $8.3 million contract for this season, though, could be a key piece of salary ballast in a deal to help Philadelphia get a useful piece or two at the deadline. It appears unlikely, however, that any team will be willing to give the 76ers a first-round pick of any significant value to acquire him.

Therein lies the problem for Philadelphia. On a roster devoid of midtier contracts -- nine of the 76ers' 15 players make $5 million or less -- trying to construct trades that don't involve Fultz but will still bring back talent that can help will be difficult. Perhaps the 76ers could use Chandler's $12.8 million expiring contract to do so, but that would then remove a quality rotation piece at the same time.

Still, if the 76ers want to make a real run in the East, they'll have to find a way to get creative and add the pieces they need. Perhaps they will strike it rich in the buyout market once again, as they did a year ago by adding Belinelli and Ersan Ilyasova. Looking at the history of players acquired in that fashion, however, shows how rarely teams are able to generate that kind of production from it.

Then there is the matter of how much faith the 76ers have in their ability to make such a run, anyway. Philadelphia has continued to win since trading for Butler, and Brown and the players continue to say the right things about the team finding its footing. But that hasn't stopped people around the league from continuing to speculate about the fit between the team's three stars, on and off the court. If Philadelphia feels the same way, it would stand to reason the 76ers would be more reticent to use Fultz or draft picks to try to bolster that group, perhaps choosing to wait and see what happens over the next few months before committing to Butler, Embiid and Simmons as the team's long-term core.

"I don't believe there is any uncertainty," Brown said. "I think, at times, you are trying to move some pieces around. If that equals uncertainty, so be it. But I think there's enough certainty to understand that we want to be as aggressive as we can.

"Elton will be as aggressive as he can be in the next week to bolster our team. And I think that that is, as I've just said, that doesn't equate to, 'We don't really know what we have.' That's not it."

No, the 76ers know what they have: a roster lacking the depth necessary to successfully navigate through the East. They have the next nine days to change that.