The first time Gordon Hayward settled into an armchair to watch early film of his 2018-19 season, he was stunned. Who was that guy moving as though he were knee-deep in a vat of molasses?

"I was thinking, 'Wow, am I really that slow out there?'" Hayward admitted. "I think it's hard in general to watch yourself on film, but obviously, this was on another level."

Boston Celtics assistant coach Scott Morrison, who has been working one-on-one with Hayward since he signed his four-year, $128 million deal in the summer of 2017, waited until early January to provide Hayward with a visual of what he needed to take the next step forward:

Morrison found positive evidence of each of these traits from Hayward's days with the Utah Jazz, then spliced them next to examples of a more hesitant Hayward in a Boston uniform.

"I wasn't sure how he'd react," Morrison said. "Gordon's a thinker. He's watching all those clips, the good and the bad, and he's focusing on the bad."

Perhaps it would be easier for Hayward if he were not a high-profile athlete with a high-profile salary to match, donning the jersey of the most decorated team in NBA history. Perhaps too the scrutiny would not be so intense if his Celtics hadn't struggled so mightily this season, slogging through in fits and starts, one step forward, one step back.

Hayward has come to symbolize those struggles.

He is attempting to corral his new basketball life on a glaringly naked public stage. The injury he incurred last season, a foot so gruesomely distorted that his teammates had to turn away, continues to bedevil him, both physically and mentally, even as he diligently works to put it behind him.

That recovery process, Hayward told ESPN, includes the assistance of a mental health counselor to help navigate the mental gymnastics of returning to "normal" -- whatever that means. Working with the counselor to navigate those gymnastics has been a major step in Hayward's healing that he concedes took some time for him to reconcile.

During his most discouraging days, Hayward recalls what Paul George confided to him: It took two full years before he could play freely, without residue of his own catastrophic open tibia fracture from 2014.

"Patience," George counseled Hayward. "Focus on who you are, not who you used to be."

That has been easier said than done. With each encouraging performance, such as Hayward's Jan. 2 explosion against Minnesota, in which he submitted 35 points on 14-of-18 shooting, there's a clunker that follows, such as the three-point, one-assist effort against Brooklyn 12 days later. Hayward strung together three aggressive games just before the All-Star break, but then he sprained his ankle during a workout, and he has been scuffling again his past five games.

Following a win over the Washington Wizards on Friday, in which Hayward took just two shots and missed both, a fan stomped through TD Garden chanting, "Trade Gordon Hayward -- for a bag of balls!"

The backlash from impatient fans comes up in Hayward's mental health sessions. "The people helping me are aware of the noise," he said.

His mind is calmer now that the mental health counselor advised him to eschew platforms such as Twitter and Instagram.

Boston sits in fifth place in the Eastern Conference. The results have been disappointing; the team was betting that the returns of Kyrie Irving and Hayward would vault Boston to the top of the standings. Instead, the team has been maddeningly inconsistent.

Asked what has been the most vexing component of his uneven season, Hayward answered, "The most frustrating part is that I'm constantly being asked if I'm 'back.'

"Back to what? Because the situation is completely different now."

In 2016-17, Hayward's first (and only) All-Star season, he averaged 21.9 points, 5.4 rebounds and 3.5 assists per game for the Jazz. He was their star, took nearly 16 shots a game, drove to the basket with great confidence, shot 40 percent from the 3-point line and went to the free throw line nearly six times a night.

This season, he averages 2.4 trips to the free throw line, a byproduct of the mistrust in his own body. His assists are down, though Boston's analytics staff is quick to point out that he has been prolific with the so-called "hockey assist," a ball-movement stat that doesn't show up in the box score.

"Even if I was fully healthy, there would be nights, production-wise, where the numbers just aren't going to be there," Hayward said. "Somebody gets hot or I'm not shooting well, and we go in a different direction, and that's how it's going to be. And that's never happened to me before.

Boston has Irving, Jayson Tatum, Al Horford, Marcus Morris and Jaylen Brown vying for shots. They make up an offense that is predicated on sharing the ball, with the lone exception of Irving, the designated alpha who creates his own offense.

Still, because the Celtics considered Hayward a key cog in their championship aspirations, they determined that the best way to help him rehab was to let him work out the kinks on the court. It was a strategy that backfired miserably. As Hayward faltered early in the season, his play became stilted, hesitant. His teammates observed this, some from the bench, and chafed at their own lack of opportunity.

Hayward's difficulties were compounded by back woes stemming from atrophied muscles that had not been fired for nearly a year. He received injections to ease the pain, but it further limited his mobility -- and further delayed his progress.

"We never felt, 'This isn't going to work -- get him out of here,'" teammate Marcus Smart explained. "It was more, 'We're rushing him.' Everyone wanted to throw Gordon back out there, but his body wasn't ready to do what we were asking him to do."

Smart said the players understand the quandary: They need a healthy and confident Hayward to win the East, but force-feeding him minutes was impeding the team's day-to-day success.

"It's complicated," Smart conceded. "You can't stop playing him, but at the same time, you don't want to lose the other guys who are playing well. Guys need to earn their minutes.

"Gordon understands that. We want Gordon to be Gordon. We need that confident guy."

Celtics coach Brad Stevens says now that he managed Hayward's return incorrectly. It was too much, too soon, and Stevens made the move to relegate his former prized college recruit to the bench on Nov. 19 after Boston's lackluster 9-7 start.

"The one thing we haven't done all year is talk about what Gordon can't do," Stevens said. "We talk about what he does well and try to put him in the best position to do that.

"We didn't do a great job of that early on. And I think we've all learned how he can best help us. When he plays with the ball, he makes the right play over and over and over."

During an early-season plane trip, a group of players wanted to roll dice. Hayward wasn't interested in playing, so he offered to switch seats. He wound up next to Tatum, the silky 21-year-old who is in a hurry to be great. The two got to talking, not about basketball but about parenthood and food and music. Hayward teased Tatum that he was still just a baby and started calling him Little Bro. That blossoming friendship, Hayward said, can only help their relationship on the court.

"Of all the guys in here, [Hayward is] one of the last guys I expected to be hanging with," Tatum admitted, "but it's happened. We talk about everything on those plane rides."

Hayward explained how his injury affected his time with his teammates.

"One of the hardest things about last year was going through the whole injury kind of alone," he said. "It wasn't necessarily anyone's fault. I had just moved to a new team and was just starting to try and develop relationships with these guys. Then I got hurt, and I was away from the team, and you don't have a chance to put a foundation down."

Veteran big man Aron Baynes was the first to show up at Hayward's door, with Hayward's beloved glazed doughnuts under his arm. Over time, Baynes, Horford and Daniel Theis, all of whom have young children, became regulars at the Hayward house, providing welcome chaos and camaraderie. Hayward has three young daughters -- 3½-year-old Bernie, 2½-year-old Charlotte (whom they call Charlie) and baby Nora -- and the kids are a welcome respite from the pressures of his job.

"The girls don't care if I have 40 or four points," Hayward said. "All they know is I play basketball with my friends. They don't even know it's the Celtics. To them it's the green team."

The dysfunction of the Celtics team has been well documented, and there was no more public evidence than when Irving berated Hayward in the closing seconds of a Jan. 12 loss at the Orlando Magic for passing the ball to Tatum for an open shot in the corner instead of waiting for a Horford screen designed to get Irving free. 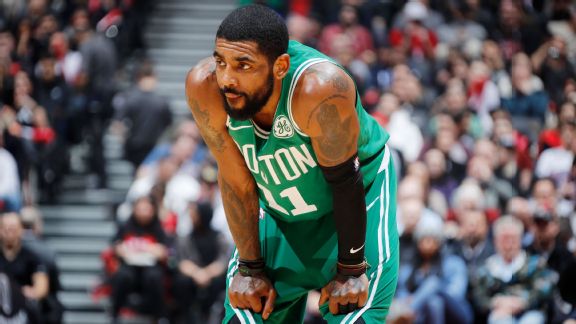 The Celtics still haven't established consistency as the playoffs near.

• Celtics are running out of time
• Celtics owner: Worst Feb. in memory
• Durant: Celtics will be fine in playoffs
• MacMullan: Still waiting on Hayward

"It didn't really bother me. Kyrie called me later that night and apologized. I knew it was in the moment."

It has all been part of Hayward's discovering where he fits amid Irving's own funk, which has affected the play of the team in recent weeks.

Hayward knows anxious fans are counting down the days to the postseason, wondering what version of Gordon Hayward will be available. He said he can no longer think like that.

"I can't worry about numbers," he said. "I've got to focus on winning plays."

But those who pine for the days of Utah Hayward, Morrison cautioned, are going to be disappointed.

"Talent-wise, skill-wise, he can be better than he was -- and I hope he is,'' Morrison said. "But it's not going to look the same. So I hope people don't compare his stat line in Utah to this year or next year. Instead, watch how he impacts the game.''

Hayward reported that he feels more comfortable driving into the teeth of the defense and exploding off his leg. He is finally challenging bigs again and absorbing contact. His ankle is still not pain-free, but the soreness is both predictable and treatable with ice and Ibuprofen.